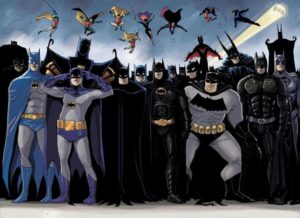 Sometime back in 2007, I learned that Warner Bros. intended to make a live-action Justice League movie.  Titled JUSTICE LEAGUE: MORTAL, it was to be directed by George Miller (MAD MAX), film in 2008, and would likely be released sometime in 2009.

And yes, the film would include Batman.

(HERE is my original “Old School BOF” report where I broke the casting of Mr. Hammer as Batman — migrated over to BOF2.0, of course.)

Here was the rub: JL:M’s Batman would not be portrayed by Christian Bale; 21 year old Armie Hammer had been cast as Batman/Bruce Wayne by Miller.  In fact, it was a completely different version of Batman that would exist in an alternate cinematic universe than the one inhabited by Bale’s in director Christopher Nolan’s DARK KNIGHT TRILOGY.

Additionally, JL:M’s Superman would not be the same one found in 2006’s SUPERMAN RETURNS as portrayed by Brandon Routh; D.J. Cotrona had been cast as the Man of Steel.

What Warner Bros. was going for with, JL:M – whether they realized it at the time or not (probably not; they were all about the $$$) – was an alternate DC on film universe that would co-exist along with, but outside of, Nolan’s Batman films and Bryan Singer’s Superman films (yes, SUPERMAN RETURNS was supposed to spawn a solo Superman movie series).

Saying that I thought this was a bad idea is putting it mildly.  Boy, did I raise holy hell about it on BOF!  I could not fathom how Warner Bros. thought it would be a good idea to have two different Batmen (Batmans?) on film at the same time.

Furthermore, how would Chris Nolan and Christian Bale feel about it?  BATMAN BEGINS had only done moderately well at the box office (it had opened modestly at the box office then had legs through the summer due to great word of mouth), and no one knew that its sequel – THE DARK KNIGHT – was going to be the cultural happening and box office blockbuster it went on to become.  In fact, neither Nolan and Bale were happy about the existence of JL:M and, allegedly, it could’ve caused Nolan not to return for a third Batman movie.

As fate would have it, JUSTICE LEAGUE: MORTAL was shelved due to a writer’s strike (and, supposedly, because of Nolan’s displeasure for it), THE DARK KNIGHT made over a billion dollars worldwide, Chris Nolan finished his trilogy of Batman films with THE DARK KNIGHT RISES in 2012, and the rest is Bat-history.

In 2017, Warner Bros. finally got the Justice League they longed wanted when, um, JUSTICE LEAGUE was released.

You know what they say about getting what you wished for, right?  ANYWAY…

Here recently, we’ve finally seen what the JL:M Bat-suit was going to look like.  As a result, it got me thinking about that film – especially in the wake of the Justice League film we got.  The plot was more “grounded” – relatively speaking – than that of JUSTICE LEAGUE as it did not involve an alien invasion and the main villains – Maxwell Lord and Talia Al Ghul – were not superpowered beings.  It was loosely based on the “Tower of Babel” storyline from the comics, and involved Batman’s Brother Eye, evil OMACS, and all that stuff.

Though I’m not a Justice League fan per se, the premise of JL:M sounds better to me than that of the one with Steppenwolf and Parademons that got made.

Of course, we’ll never know if George Miller’s film would’ve been better or worse than the version by Zack Snyder/Joss Whedon/WB executives, so we’ll have to chalk it up as “what might’ve been.”

But what all this renewed talk about JL:M has really got me thinking about is this: Can more than one version of the same character exist in live-action film at the same time?  And naturally, my focus here is on Batman.  For example, could Ben Affleck (or another actor around his age) continue on as the “DC Movie Universe” version of Batman, while Matt Reeves does his own thing with another actor in his Batman film(s)?

Eleven years ago, I thought that such a thing was a terrible idea and would likely never happen – especially after the demise of JL:M.  But now, I’m thinking…it just…might…work.

The argument against will be, “This will confuse the audience.”  I too once bought into that line of thinking, but I don’t any longer.  When it comes to the average moviegoer, they don’t much think about “continuity” and “universes.”  Hell, there are a ton of folks in this audience who think Ben Affleck’s Batman is the same as Christian Bale’s, and BATMAN BEGINS was a prequel to BATMAN ’89!

On the other hand, fans are used to “elseworlds,” “what ifs…” “multiverses,” and “ultimate universes” and have been most of their comic book-reading lives.

As you’ll rarely hear me say this, but yes, I think this is a case of something that does work in the comics, being able to also work in live-action films that are targeted towards the mainstream audience.

Perhaps this is exactly where we are heading with this already-announced alternate/non-canonical DC on film banner that’s apparently coming soon from Warner Bros.  If so, I’m ALL for it.

I think my friend and longtime BOF contributor Robert Reineke had a great take in his recent BOF op-ed when he said such an approach shouldn’t be viewed as a negative.  Why?  Because it actually opens the door to a whole new “worlds” (see what I did there?) of possibilities.

And you know what?  This approach is a total 180 from what the fine folks at Marvel Films are doing with their MCU.

Continuity and shared universes can be great, but they can also be creatively stifling and potentially finite.

In the wake of the BATMAN v SUPERMAN/JUSTICE LEAGUE debacle, Warner Bros. MUST move forward with DC on film differently.  Maybe their idea of creating a cinematic DC multiverse without the shackles of continuity is their secret sauce.

If it isn’t, perhaps it should be. – Bill “Jett” Ramey