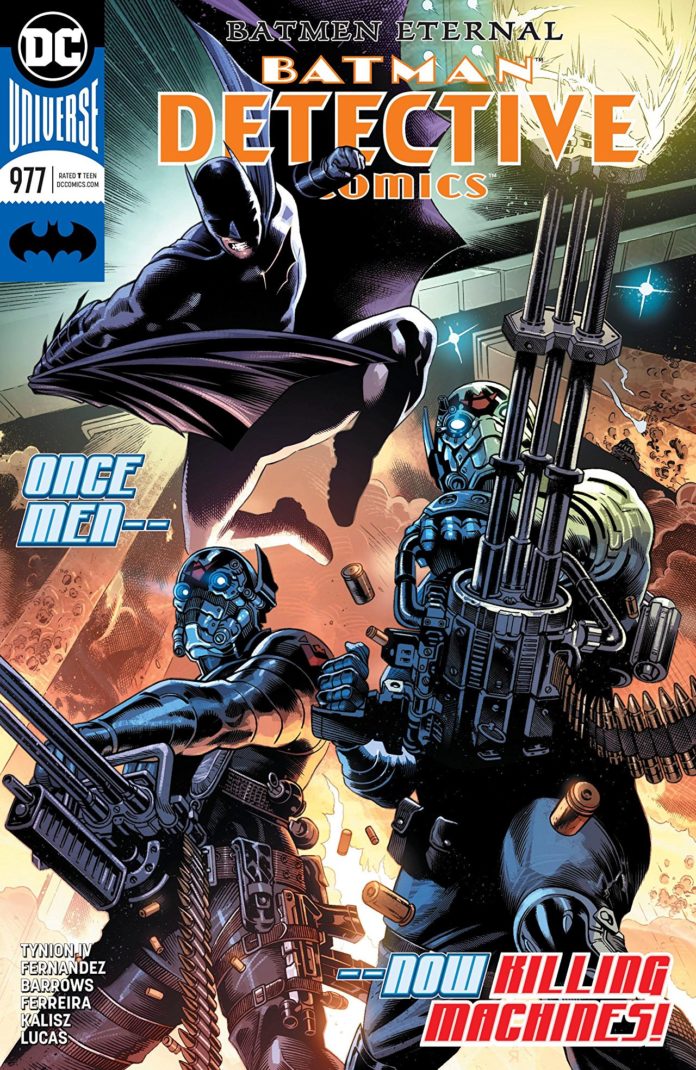 SYNOPSIS: “BATMEN ETERNAL” part two! Batwoman has reunited with her father, and leadership of the Colony is in her hands…but should she take it? And if she does, what is she supposed to do about a problem like Batman?

Detective Comics #977 continues taking the reader on a journey that revolves around Batwoman’s choices. Her assassination of Clayface has turned the Bat-family not only upside down but also against each other. Characters with a bond as strong as Batman and Red Robin are now questioning motives and themselves. Tynion a master at creating deep emotional bonds between reader and character now has become a master at creating jaw-dropping conclusions. All building up to his final issue coming in Detective Comics #981.

The issue draws you in from page one. As you flip though the pages you question everything you see. How did we get here? What timeline is this? Is this really happening? Tynion nails Bruce and Tim’s relationship, how Tim will drop everything for Bruce and later on how Tim confides in Bruce. Tynion through out the run has shown us some wonderful, emotional moments. Continuing the trend is this Batman and Red Robin conversation at the end of the book, it’s one of the best he has written.  While I have not been a huge fan of the Colony I will say that Ulysses is fascinating.  His intelligence level and ability to create technology is beyond that of the Bat-family, almost Luthor like if you will. There is more to meets the eye here and I’m excited to see what he knows and what his actual motive is.

This is one of the finest artistic adventures in Detective since Rebirth began. It was a pleasure to have an all-star team bring us the interior artwork. Javier Fernandez, Eddy Barrows and Eber Ferreira all contribute to this gem.  The first 9/10 pages have a Neal Adams vibe with the panel placement and all the subtle details with some great action to top it off. Huge shout out for bringing the 90’s Robin Red Bird back in the background, love a good wink/nod. The one thing I wasn’t a fan of was the “Arkahm Knight” like look to the Colony Soldiers, that is my one nitpick.  The main highlight of the book is the end conversation between Batman and Red Robin. This scene was both wonderfully drawn and written. Batman leaning over the ledge of a building, Red Robin appears from above, discussing family tragedy and strategy on a shadowy rooftop waiting to pounce on criminals.  Fans that love Batman and a Robin will eat this ending up. It is definitive dynamic duo.

Tynion and this star studded artistic crew have done it again.  Just when you think he can’t top himself, you open up the book and are wowed from page one.  The story just gets more interesting as you read on but still leaves you asking questions. Batwoman and Ulysses are really starting to capture my attention whenever they appear.  Tynion is finally getting me interested in the Colony now that Batwoman has gone rouge.