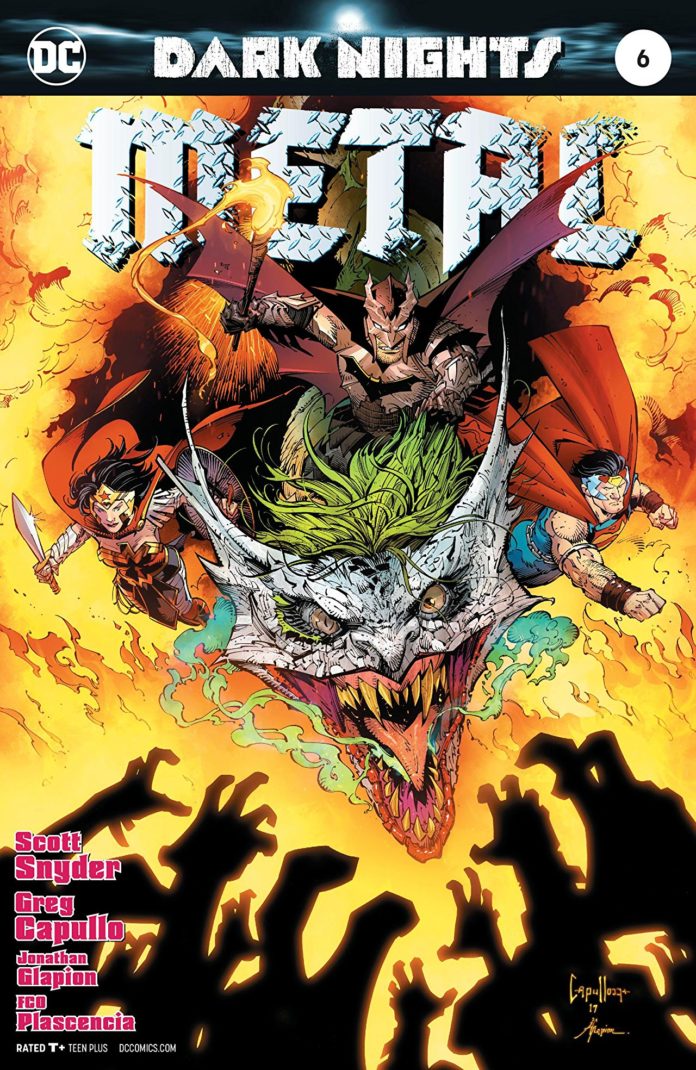 SYNOPSIS: All roads lead…to darkness. In the devastating and epic conclusion to DC’s cataclysmic event series, heroes from across the universe make their final charge into the unknown to battle the forces of the Dark Multiverse! Space and time, dreams and nightmares, all will collide—and what is left at the end will leave the DC Universe irrevocably changed!

One of the most Batsh*t crazy Batman stories of recent memory wraps up this week in Dark Nights: Metal #6. Let’s try and rehash what’s happened thus far.

Oh screw it, a lot of weird stuff has been happening. If you’re reading this, good chances are you’ve been following along.

Full disclosure: this story hasn’t been my up of tea. That’s not to say it isn’t good, it’s just not my type of story. So, I’m going to look at what I enjoyed in this issue.

Batman finally takes on the Batman Who Laughs, and has a surprising ally: The Joker. These few pages are flippin’ awesome. I loved the way they took him on, and the chilling dialogue TBWL and Mistah J are spewin’ was eerie and delicious. The fight ended a little abruptly, and didn’t give a definitive answer on anyone’s fate. I guarantee TBWL will return to the DC Universe.

I also enjoyed the epilogue. Bruce invited over the entire Justice League, and then some, to show his appreciation for them, as well as warn them on what’s to come (a weekly series called No Justice coming in May). I found these pages to be all about characters and bonding, which I enjoy reading every now and then with the DC heroes.

Obviously, Greg Capullo nails every panel in this issue. He’s been fierce throughout this entire story, and I mean that in a good way. He was let off the leash for Metal, and his pages have been so imaginative, horrific, and entertaining. Though the story hasn’t been my favorite, I’ll look at anything Capullo draws.

As for the rest of the story, why don’t you tell me what you thought? I’ve tried from straying too harsh on this book, because I understand I’m in the minority. I love Scott Snyder’s storytelling, and will blindly follow him wherever he goes. It’s just with the Dark Knight, I like him staying a little more grounded than dark multiverses, Barbatos, forges and whatnot.

So to Metal, I bid you adieu. It’s been a strange but good-looking ride, and I’m ready to see what’s coming next. What I can be thankful for is the Dark Batmen: seriously, those one-shots were great. – Ryan Lower

BATMAN AND THE OUTSIDERS #10 Review