SYNOPSIS: As the full scope of the Scarecrow’s plans is revealed, a bloodied Dark Knight fights for his life, and all the lives in Gotham City, against an unrelenting, unstoppable opponent. The shocking conclusion to “Fear State” is here…Will Batman ever be the same? 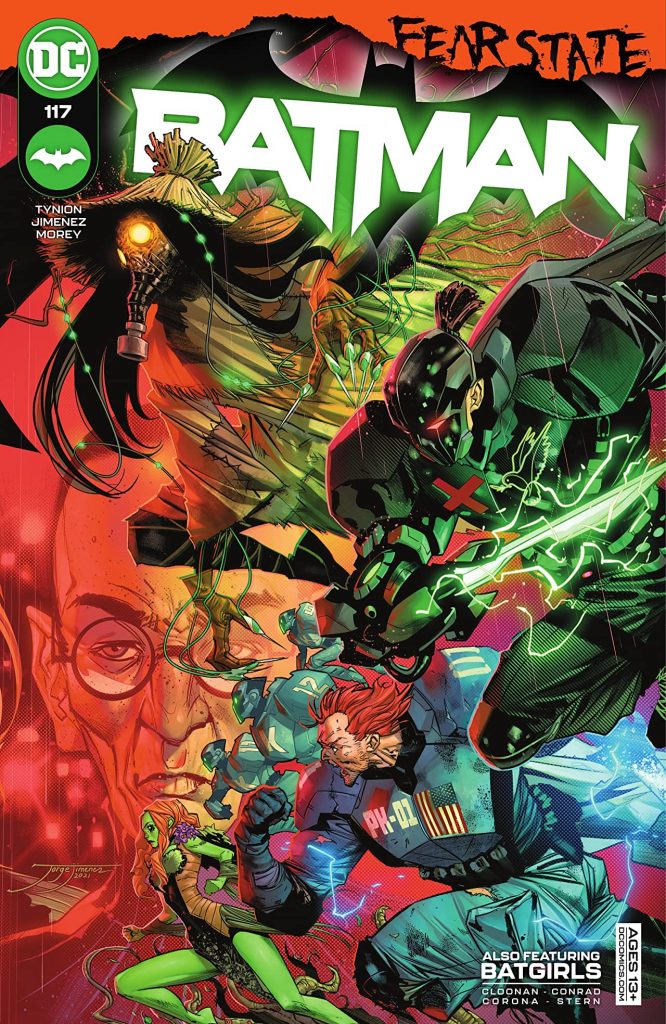 Towards the beginning of BATMAN #117, there are two caption boxes that inform readers to read other books so that we understand what’s going on in this panel.

To understand what’s happening in a BATMAN book, you have to check out other books too. While that may seem like good business, it’s a slap in the face to comic readers.

James Tynion IV’s big event finally comes to an end in this issue, and I couldn’t be more ready. There’s a confrontation with Batman and Peacekeeper-01, The Dark Knight has a talk with Miracle Molly, and Simon Saint is confronted by a group of the Bat-Family because….you have to read other books to know why…and Poison Ivy is confronted by Poison Ivy.

In summary, there’s a lot coming to a head here, but in a whimper instead of a boom. Writer James Tynion IV does have a few good moments though, specifically when our hero is talking to Miracle Molly at the end. It’s inspiring and shows us the core of the character.

Artist Jorge Jimenez does a great job with penciling Batman’s big battle with Peacekeeper-01. I’ve said many times, he is the saving grace of this book. His action is superb, and he has a great, subtle mix of realism sprinkled in his images that also take advantage of the medium. I wish he’d had a better story to draw for.

This “Fear State” event was sloppy, convoluted, confusing, and a cash grab. It’s a low point for the BATMAN title, which truly is a bummer. I’ll miss Jimenez on the book, and look forward to Tynion’s future works in other books. I just don’t think he was a good fit here.

A new creative team comes to BATMAN next month, and I’m looking forward to it. – Ryan Lower

Jeffery Wright: THE BATMAN’s Batman is “The World’s Greatest Detective”