SYNOPSIS: Nightwing and Babs have fought through the fear-stricken Gotham streets, but now their fight takes them to the skies above Gotham, with the Batgirls and Tim Drake (Robin) in tow! Now aboard the Magistrate’s Skybase-01, they have made it their mission to bring the airborne leviathan down, prevent Seer’s disinformation from being broadcast, and save the innocents aboard. But in this paranoia-stricken city, not everyone is who they seem… 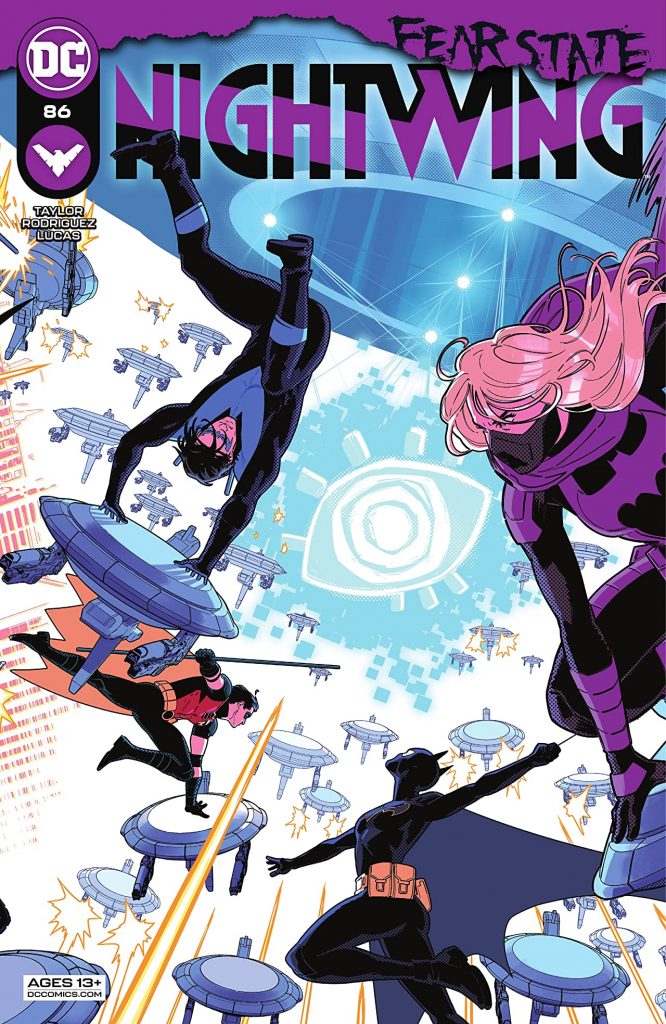 The FEAR STATE conclusion is here! We’re one issue closer to next month’s release of NIGHTWING #87, which plays out as one continuous image and I can’t wait to witness it.

Nightwing, Batgirl, Robin, and other allies prepare to make their final strike against the Magistrate and the Seer, Batgirl/Oracle’s evil counterpart.

I’ve been indifferent to Seer since she was introduced in this series, however, she has a cool ruthless villain moment here that makes me curious to see (no pun intended) more of her.

Robbi Rodriguez’s art is on par with the previous FEAR STATE issues and he has one very touching panel on the first page that ties in with the “fall” theme.

It super-belatedly dawned on me this crossover has a cyberpunk vibe that we haven’t seen in NIGHTWING since “The Bleeding Edge.” I’ve sang this song before but I wanted that arc to continue for a few more issues and it’d be wonderful to see this story and that one merge in the future.

If I had to criticize something here it would be that the jokes in NIGHTWING #86 are hit and miss. A majority of them are clever enough but I did roll my eyes at a couple. C’est la vie.

I will say that I was appreciative of one quip Nightwing had where he asked his friends to remove a disguise they had adopted so they’d know who to punch in the big fight. Respect for continuity, and safety, is always a win.

No spoilers obviously, but I do want to say that the ending to this issue genuinely made me curse out loud (in a complementary way).

NIGHTWING #86 does what it set out to do: successfully conclude a crossover that temps people to pick up the new BATGIRLS series when it comes out! – James Armstrong