SYNOPSIS: When fifteen-year-old Selina Kyle, aka the future Catwoman, becomes homeless, she must confront questions of who she is and who she will become.

She rejects human cruelty, but sometimes it seems as though brute force is the only way to “win.” And if Selina is to survive on the streets, she must be tough. Can she find her humanity and reconcile toughness with her desire for community…and love?

From Lauren Myracle, the New York Times best-selling author of books like ttfn and ttyl, comes a new graphic novel that tells the story of a teenage Catwoman, as she struggles to find her own identity while living on the streets of Gotham. 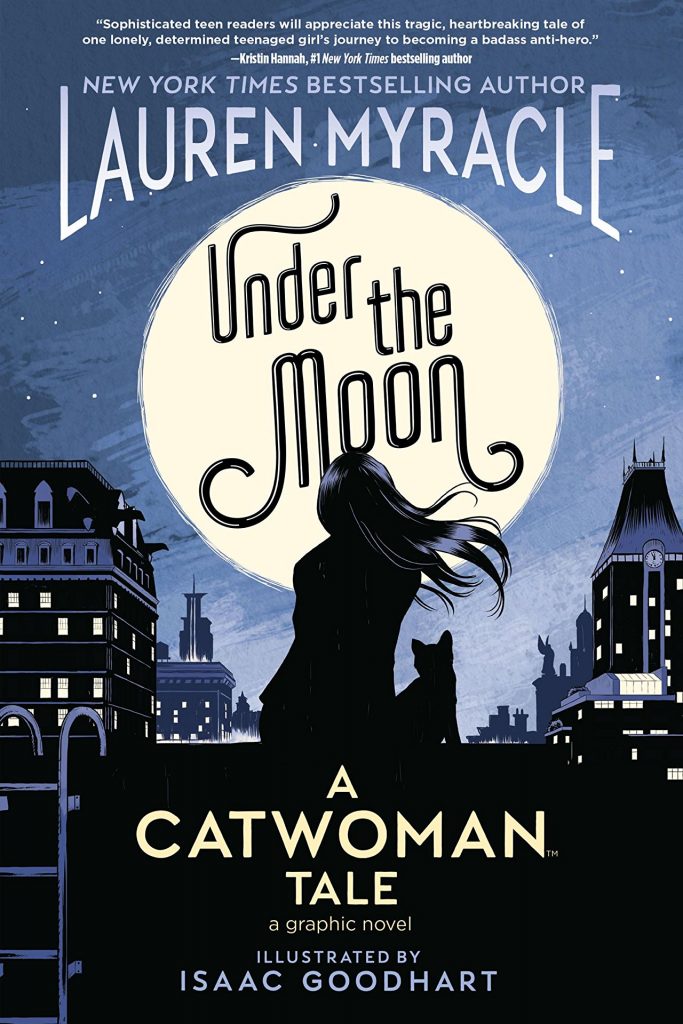 There’s a new series of books on the streets.  From what I can tell, DC Comics has decided to target the teen demographic more aggressively by releasing standalone graphic novels portraying some of their most popular characters in “coming-of-age” stories.  The book in question today is Under the Moon: A Catwoman Tale by Lauren Myracle.  Myracle is a fairly well-known young adult author, and though I’ve never read any of her books before this one, I’ve certainly heard her name come up in YA circles.

There.  I’ve done it.  I’ve saved you an hour or two of reading.  You can thank me later.

Here’s the deal: I really don’t believe that anyone who reads BOF or listens to the BOF podcast or watches the BOF vlogs is going to enjoy this book; the target demographic just won’t be reached amongst our populace.  That’s not to say that YA books can’t be consumed and enjoyed by adults – I’m just saying that while I’m certain some teenage girls imbibe BOF content, I’m guessing they are in the minority.  And this book is for teenage girls.

Maybe.  Maybe it’s for teenage girls.  More on that at the end of this review.

The book opens by showing us Selina’s life – her mom is neglectful and keeps bringing home equally neglectful and abusive boyfriends that poison Selina’s life.  Mom’s most recent catch is Dernell, an oaf of a guy with a heavy hand and a mean streak.  After Dernell kills a cat that Selina finds on the street, Selina leaves the house, never to return.  She begins a life of thieving, homelessness, and as mentioned above, parkour.  There is a subplot that weaves through this tales pages of a murdering dog on the loose – the Gotham Growler – but nothing all that interesting happens with that, so it’s probably best not talk about it.

I’ve got some issues with this book – some minor, some major – but before we get to those, let’s chat about the artwork, which is really one of the only things that this book has going for itself.

Isaac Goodhart is the illustrator here, and I have to say, I really dig his artwork.  Shades of blue and white prevail, and occasionally lavender-infused imagery fills the pages.  His style reminds me a bit of Charles Burns.  The characters are solid and consistent, and he creates some fantastic layouts for the pages.  Overall, this is a VERY  attractive-looking volume.  No complaints there.

But the story and the characters are so weak, it almost hurts me physically.  Let’s start with the girl about whom this entire book is about: Selina.

She’s just not likable.  When life becomes too much at home, she runs headlong into a life of stealing and uncontrollable emotion, and she even cuts herself to process the pain.  We’ll address that part in greater specificity later on in the review.

Yes, we as fans of Batman and his masterful universe all know that Selina becomes Catwoman, diabolical thief and anti-hero supreme, but how she gets from points A to B don’t hold enough water to have me mentally take that leap.  Selina spirals out of control after a series of hard knocks, but I’m just not convinced that what happened to her was enough to justify her reaction.  Her entire world collapses too quickly.  It’s almost as if she was looking for a reason to quit school, become a drifter, and generally give up on life.

Her mother’s abusive boyfriend kills the cat she brought home, and her mantra for the rest of the book is, “When I take care of things, they die.”  Ooookay, Selina.  ONE cat died. ONE time.  Get over it.

After the cat dies, she wanders into the night and promises to herself that she will take on the qualities of a cat – to be stealthy, fierce, and fearless.  The problem with this is that the cat that just died showed nothing but fear, zero stealth, and zero ferocity (he dies by falling off a window ledge after being so paralyzed by fear he couldn’t jump down).

And here’s another major problem: whenever the people in Selina’s life who care about her try to show concern and reach out to help her, she purposefully shuts them out because they can’t get inside of her mind to find out what’s wrong.  In being unwilling to share her burden, she becomes a self-important loser in this story.  She won’t let anyone in, and then immediately blames them for letting her down.  Narcissism, thy name is Selina.

At one point in the book, she literally blames someone for not being a mind reader.  The person she blames?  Bruce Wayne.

Ah, Bruce Wayne.  You’re such a GREAT character.  Some may even say the best fictional character ever written.  If only Lauren Myracle understood you at all.  Sadly, she does not.  Bruce Wayne in Under the Moon is a latte-sipping pretty boy who says things like, “Last night’s homework was from hell, AMIRITE?”  (Yes, that’s verbatim from the book.)

If you pick up this book (I would advise checking it out at the library before purchasing), and you find Selina to be a solid, admirable character, please let me know.  I’d love to be shown something that I missed.

Anyway, in her life of self-imposed homelessness, Selina stumbles across a guy who trains her in parkour and invites her to an underground lair where his two accomplices are planning a book heist.  I won’t dive into the particulars here, other than to say that the outcome is egregiously transparent and we get no backstory on how this small group of people came together and how they are able to assemble a very expensive-looking control center.  I thought they were homeless or something, but what do I know?  Either way, nothing is explained here.

I’ll wrap this up by saying this: I don’t know who this book is for.  On the surface, it appears to be a book for teenage girls (the accompanying illustrations even have an innocuous, sometimes cutesy feel to them), but there are so many things that lead me to believe this should come with a Mature warning.  For instance, Selina drops a BUNCH of f-bombs, and at one point, a character grabs his crotch and pretty much outrightly threatens that he would like to rape Selina.  And lastly, there’s the cutting thing.

In the back of the book there are a list of resources you can contact to talk to someone about self-harm, abusive relationships, and animal abuse.  This is great, and helpful to someone who may be facing these issues, but it left me even more confused.  If one of your goals is to solve or prevent harmful coping mechanisms like cutting, why would you show your main character cutting herself to process her pain?  Why even present this as an option to the young girl that is going to pick up this book?  I understand that you may want to comfort a teen who has used (or is using) cutting so they don’t feel like an outsider, but how about we show our protagonist dealing with a difficult situation in a healthy way?  Wouldn’t that be more helpful?

So there you go.  The message of the book is incredibly off-putting and oftentimes downright confusing.  The characters aren’t likeable (or are outright clichés).  The main character herself is not someone you’d want your daughter to emulate.  It’s hard to give this one a letter grade, so I will just let the review speak for itself. – John Funderburg