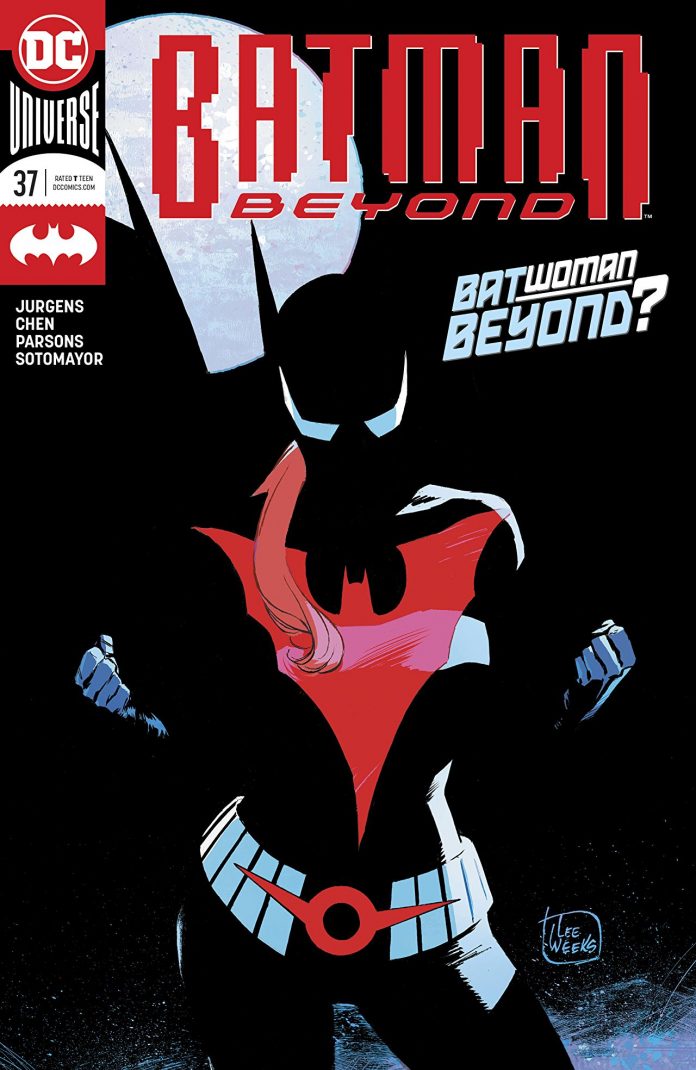 SYNOPSIS: In the wake of his fateful showdown with False Face and the Splitt, the Batman of tomorrow has gone missing! With the Caped Crusader AWOL and Neo-Gotham facing the threat of one of the deadliest villains it’s ever known, a new hero is needed! Bruce Wayne will turn to friends both old and new in order to keep his city safe, but that won’t be enough. Fortunately, a new and mysterious protector will arrive on the scene, taking flight to save the city!

Our newest adventure begins on a bit of a down note, Terry is still missing and amnesiac following his ordeal with False Face. However, his suit is missing from the Batcave and Alfred’s monitor systems went dark while the suit was taken. Meanwhile, random street crimes are being stopped by an unseen force, the only evidence left at the scenes are Batarangs.

I really need to hand it to Dan Jurgens, he seems to be venturing out of his comfort zone with this story by making the hero somebody who isn’t Bruce or Terry and he does a great job of crafting this air of mystery surrounding who is currently wearing the mask. We also have appearances by Jack Ryder, who is pretty much becoming a mainstay in this series and a good way to get some exposition and commentary out of the way without bashing you over the head with it. Our new villain is also revealed, and I’m incredibly excited to watch this conflict play out.

Sean Chen (of Ironman and X-Men fame) joins us as the penciller this time around with Sean Parsons as the inker and Chris Sotomayor as the colorist, and man, I love this combination. Chen’s designs are absolutely fantastic and the colors are perfect. The art, on the whole, is quite possibly the best of this series so far, at least in my opinion. I’m a stickler for consistency, and this team definitely nails it. The proportions are all as they should be, the backgrounds are what you expect Neo-Gotham to look like, and the look of the major villain for this arc is awesome.

It’s still early in the arc, but coming off of what I think was a very good, very interesting narrative from the last arc, I think Jurgens is crafting an above-average story with a character or two that we haven’t seen in quite a while. – Matt Whaley