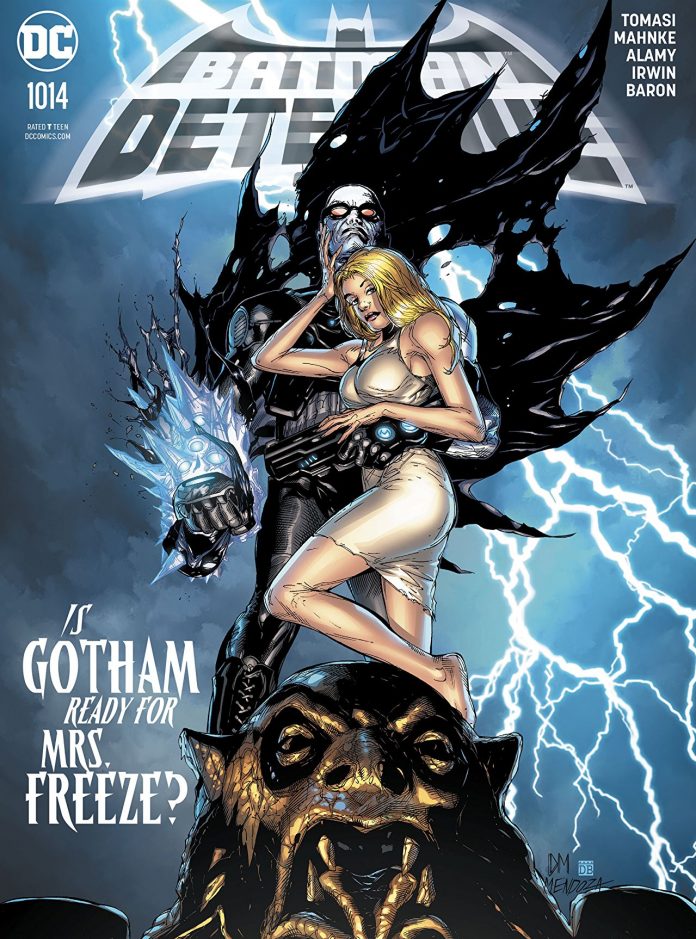 SYNOPSIS: Nora Fries has been the apple of Mr. Freeze’s eye for a long time. For years he has toiled and suffered to try and cure her of her ailments, and bring back the life they had together. He has finally done it, but will Nora Fries be the same person she was when she was frozen? Or is there something broken that can’t be fixed?

Detective Comics #1014 will go down as one of the greatest Mr. Freeze stories of all time, the issue where Mr. Freeze finally won! Tomasi has really taken the book to the next level with this arc.  He has teased us with greatness and is now ready to release that greatness for all to read.  Tomasi gets his hands on one of the most tragic villains of all and you won’t believe what he has done!

Tomasi has given us a new Freeze erasing the putrid New 52 take. Tomasi’s Freeze is a bit brasher but at his core, he still has the same motives and drive, Nora.  The moments Freeze and Nora have in this issue captive you. The tension, passion, and love bled through the pages.  Here is where Tomasi is a pure genius. We have witnessed great scenes/stories about Freeze proclaiming his eternal love to Nora in the past. What is different here is that Nora accepts and responds with open arms. She’s in the moment, not really agreeing with the methods taken but the man of her dreams saved her life. That’s all that matters to her, they are finally together again.

My only gripe is that the story ties into a larger company crossover involving a Lex from somewhere bent on Multiverse domination or whatever. Not my thing but I’m not going to let that define this issue.  Tomasi, as he has done from his first story, gives us some wonderful Batman/Alfred moments in the cave. Alfred has never been funnier in all the years I’ve been reading Batman books. That English wit is always on full display.

While DC’s newest power couple dominates the book it won’t bother you and you won’t say there isn’t enough Batman.  Once you get a look at these two you are drawn in from the first panel.   Fresh, bold and daring, you didn’t realize you wanted this story until Tomasi wrote it. Part Bride of Frankenstein, part Bonnie and Clyde, all Batman.

Artist Doug Mahnke is yet again on the top of this game.  In this issue however, he is met page for page by colorist David Baron.  Mahnke already draws magnificently and what he does here in this issue that caught my eye is his backgrounds.  These backgrounds are not too detailed or busy and this allows for an old school comic book feel.  This allows Baron to swoop in and use reds, blues and greens as if they were almost the whole background like those old silver age books.  Mr. Freeze’s blue skin atop a red background really stands out.  Several panels explode off the page.  This is some of the best Freeze artwork I’ve ever seen.

The splash page where Freeze and Nora break into Wayne Tech is like a Fantastic Four/Mortal Kombat hybrid, just glorious to behold.  What really takes the cake comes early in the book. The Freeze/Nora moments; the facial expressions really sell the emotion in the book.  You can read so much of what is going on from Nora’s eyebrows alone.

I cannot be the only one who busts out laughing at Alfred wearing that Flash mask right? I can’t help it, seeing “the Flash” in the cave this way brings a huge grin to my face, pure bliss.

Detective Comics feels timeless since Tomasi found his groove, stories that capture the imagination but are not long enough to lose focus or seem bloated. I appreciate the risks and liberties Tomasi has taken. Creating DC’s new Bonnie and Clyde, something I didn’t see coming.

Detective is on a historic run here, Spectre, Joker, Deadshot and now Freeze. Add this title to your pull list this week! It should have been there several issues ago. – Peter Verra

THE BATMAN Theme and Reflecting on its Predecessors