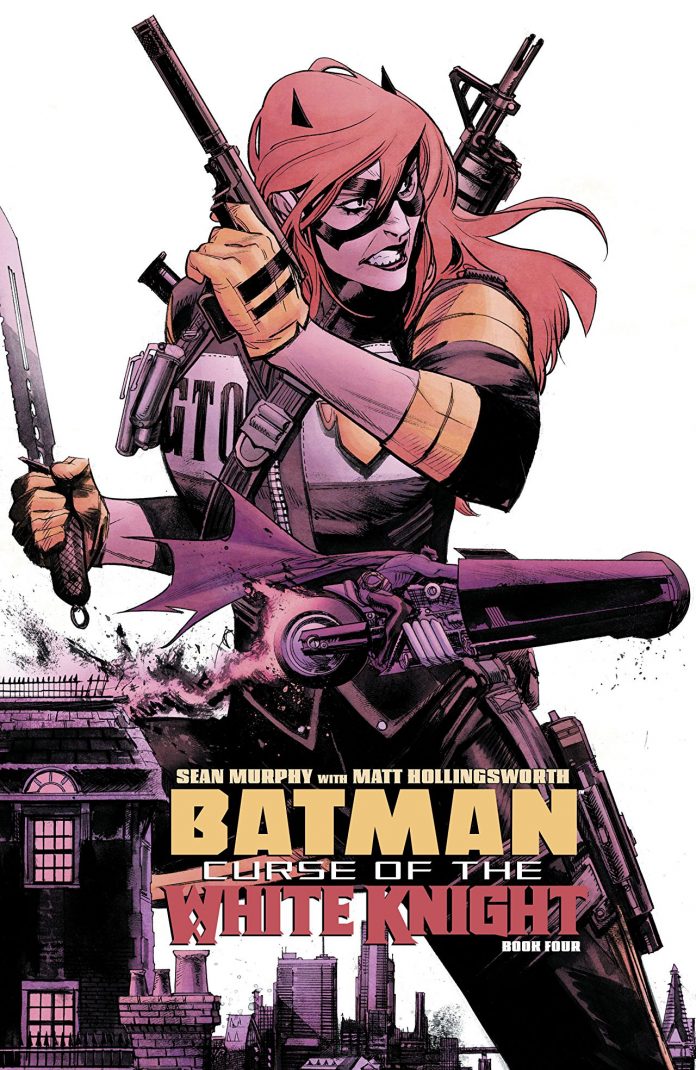 SYNOPSIS: After a shocking tragedy strikes the Bat-Family and Montoya takes the reins, Babs defies the GTO and goes rogue in the hunt for Azrael. When her new methods prove almost too effective, Batman intervenes-leaving Harley to her own devices in the wake of her own emergency.

As if last month’s CURSE OF THE WHITE KNIGHT didn’t deliver enough of a gut punch, Sean Murphy gives us a one-two knockout with this week’s issue #4.

SPOILERS ahead for anyone who isn’t caught up.

We ended last month with a shocking attack where Azrael killed Gotham’s favorite Commissioner, Jim Gordon (who had just handed over power to Renee Montoya). This month, we open up with somewhat of a prologue, seeing our characters react to this heartbreaking moment, which is no more effective than that panel with the Dark Knight right before the title page.

Can it get any worse for our heroes? Yes, it can.

We experience the aftermath of the big loss, with some of the heroes arguing amongst each other, feeling somewhat lost in which direction to head now. Meanwhile, Batman checks in on the new life he helped bring into the world the last issue and has an emotional breakdown with Leslie Thompkins. She then informs Bruce of a mysterious meeting her and Alfred experienced in the past, which may start to explain why “curse” is in the title of this book. Our issue ends with Barbara taking justice into her own hands, which leaves us with the second knockout punch of the issue, leaving it open to whether its a temporary or finite loss.

Sean Murphy is extraordinary. I’ve reviewed all of his BATMAN: WHITE KNIGHT issues as they came out, the trade paperback, and now all 4 issues of this story. It’s getting really hard to find new ways to praise his work. Each issue, he’s delivering us new and exciting moments for our favorite hero and his supporting cast. Moments that are true to these characters, yet unexpected and exciting for this incarnation.

His art is top-notch too. No surprise there. While dealing with his emotional beats, we still get some awesome easter eggs, including a great panel featuring four Batmobiles. It’s not distracting to what’s happening in the issue but is a great visual for all of us fans. Murphy also draws a mourning Batman like nobody I’ve seen before. Sure, we’ve seen a sad Dark Knight before, but nothing that hits like it does here.

Another chapter and another high recommendation for CURSE OF THE WHITE KNIGHT. This is turning into the book of the year (yet again), so catch up and get emotional with the rest of us. – Ryan Lower