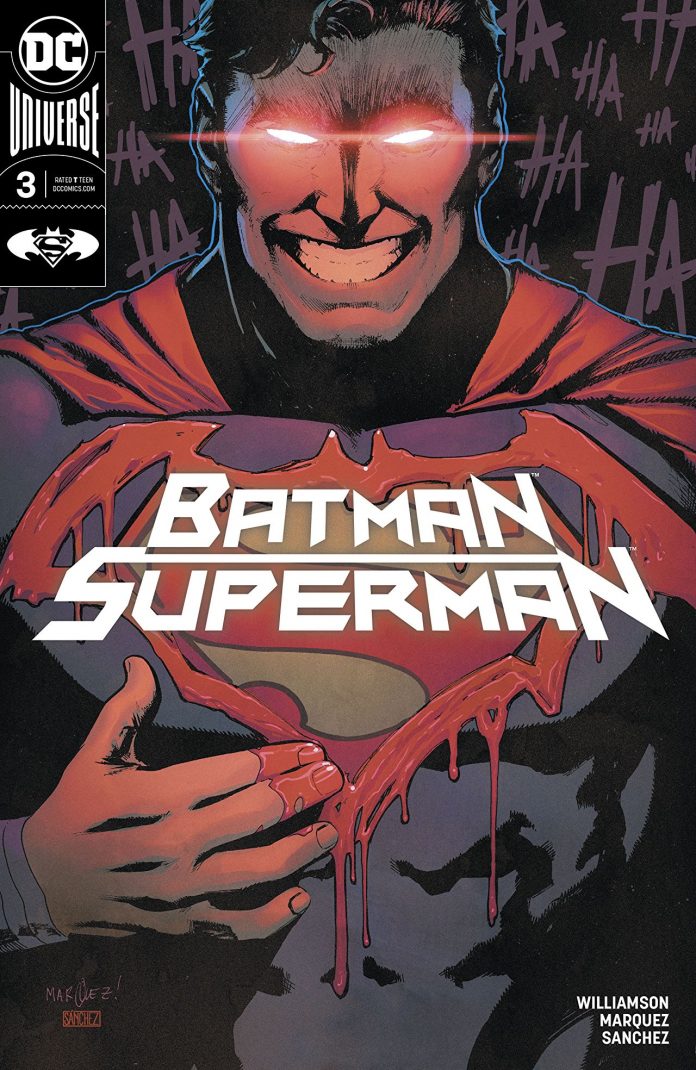 SYNOPSIS: “Who are the Secret Six?” part three! Is Superman the newest member of the Batman Who Laughs’ Secret Six? It certainly looks that way, and Batman may be powerless to stop the Man of Steel and his own demented doppelgänger. The Dark Multiverse’s most dangerous Bruce Wayne is loose in our world, and he has our world’s greatest superhero at his side. Who do you turn to when there’s no one to trust?

We’re three issues into BATMAN/SUPERMAN and the title continues to deliver in all the ways I could ask it to. What it gets right, it gets really right. What it gets wrong, adds up to mere nitpicks in my opinion. Let’s start with the one thing that is less than awesome and then get into all the good stuff in BATMAN/SUPERMAN issue #3.

If this book has a weak point, it’s that it builds some elements up to be major story components that will have overarching reaches and serve as foundational elements to the narrative. Last issue, I spoke about the minor let down of not getting much of “The Secret Six” after it was positioned as the defining focus of this storyline in issue one. Instead, the secret was barely alluded to and required the reader to do a bit more work than ideal to connect the dots between potentially six characters infected with The Batman Who Laughs (TBWL) toxin and the namesake of this run.

In issue #2, Superman’s mission to learn TBWL’s master plan by appearing to have been infected by Shazam felt like it was going to be another major focal point. However, in issue #3 that thread plays out in about 2.5 pages. We learn that Superman was truly infected but was able to hold back the effects of the serum for a while thanks to his Kryptonian DNA. Actually infecting the most powerful on Earth feels a bit like a weak plan and Superman blows his cover pretty quickly thanks to his response when TBWL references Clark’s dead Kryptonian parents and his plans to kill everyone in existence including Lois and Jon. It is a bit of a let down based on the setup, but it does provide a look into the intelligence of TBWL and a sign that doing things Batman’s way isn’t going to cut it against his dark counterpart.

Everything else in this issue is awesome.

This book delivers on big action in a really fun way. We get Superman and Batman vs. TBWL, a showdown with an infected Commissioner Gordon and his Superheavy bat-suit, and the duo (defeated?) in a battle against a surprise infected hero. The story zips along at super-speed providing a high adrenaline story that miraculously doesn’t feel thin or lacking in the character development. Joshua Williamson deserves a lot of credit for his ability to set the stage with looks into the characters’ thoughts and natures before, during, and after the mayhem. I found the opening and closing of the issue particularly strong as Williamson employs a mirrored narration tool highlighting the differences and similarities between Batman and TBWL. TBWL may very well be the most over-exposed new character in the DC multiverse, but his presence feels welcome and justified by the story Williamson is telling, as opposed to some of his appearances which fall a bit flat or redundant.

A key aspect of his necessity here is to provide a villain that required Batman to think differently than he normally does. We’re used to the Batman with the master plan at this point. He’s been making the smartest moves of our heroes for decades, but when trying to defeat his evil other-half, we are provided with an opportunity for Superman to take the lead on tactics and decisions in order to eliminate TBWL’s strategic advantage of knowing Bruce’s thought processes. It’s a fun reversal that we haven’t seen much in more recent history.

David Marquez’s art is still gorgeous. I’ve written at length about his approach to character design, costume presentation, and physique/body composition. Those are all present here. His characters seem as natural in motion as they do in discourse and his panel framing is really well-formed. Every page is a visual treat for the reader and the quality is consistent from page to page. The only small complaint I have is that the physical locations for the issue didn’t provide much need for background settings. Instead, we get a lot of panels with well-drawn characters in vague or slightly generic looking scenery. It makes sense for super-prison cells or the Fortress of Solitude, but a little more detail would be nice.

Overall this is another excellent addition to this young series. It’s not to be missed by fans of either titular hero and looks to being tied in more directly to the larger story being told across the DC Universe and Justice League more precisely. If you’re not reading this title yet, do yourself a favor and get caught up. You won’t regret it. – Garret Grev Jared Leto’s Joker Set To Get His Own Movie