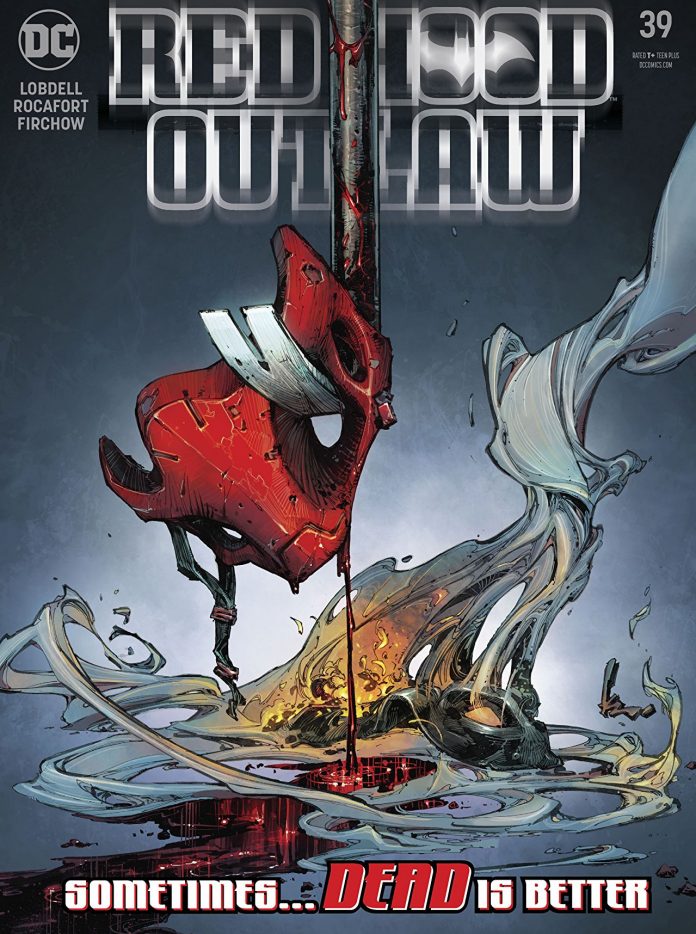 SYNOPSIS: “Generation Outlaw” continues! Class is in session, and Red Hood’s students still have a lot to learn. With Doomed running amok, each villain-in-training decides to use the chaos in order to stake their claim as the one to beat. But while Red Hood tries to teach them a valuable lesson about power and responsibility, Doomed’s actions could, well, literally doom them all!

Starting off with a cover that references the tag line for the movie Pet Sematary will always catch my attention during Halloween season. What horrors await Jason Todd inside? The cover alludes to his death via crowbar at the Joker’s hands, but for those expecting some connection with A Death in The Family, well, you’re going to be disappointed.

Instead, we pick up where the last issue left off as Generation Outlaw encounters Monster Arm and his crew…only to have the Red Hood promptly shoot Monster Arm during his long opening monologue! It’s a move that shocked not just his students, but their opponents as well and happens to be my favorite part of the book.

What follows is 3 double-page spreads of cartoonish action. Thanks to Cloud 9 it looks like the characters are tussling Looney Toons style, with onomatopoeia swirling about as Red Hood stands idly by, commenting on everything.

Jason’s narration works for this story, showing his lack of polish and experience teaching, but also adding a humorous slant to the proceedings. He certainly isn’t Bruce Wayne, although it’s worth noting that while he seems to encourage his students in their committing violence, he is drawing the line at killing, at least in this case. It’s hard to ride the line between angel and devil and I’d love for his students to actually call him out on it and have Generation Outlaw turn on their mentor. Maybe someday. For now, I’m still having a hard time seeing these kids as that villainous. They seem more misguided, looking for a role model of any sort, not the next Legion of Doom.

The story gives way from Generation Outlaws to The Outlaws, who, confused over the sudden sentience of Pup Pup and resizing of Ma Gunn, inexplicably find themselves back on Earth as the sigil of Doom shines in the skies above.

I’m happy to have Artemis and Bizarro back on Earth and one step closer to reuniting with Jason, but this feels lazy and unearned. They are simply all sitting in a room talking when this unfolds around them, making them unknowing participants in their journey home. Ma Gunn’s appearance gets brushed under the rug and Pup Pup’s explanation gets pushed aside for their arrival in a place Artemis seems to not be fond of, though I have no reference for why she knows it so well. Told like this, the characters have no sense of agency.

While I’ve got issues with how some of this played out, I can’t say I have any with the art. Rocafort’s style looks like nothing else on the stand and his layouts and paneling are always interesting. Firchow’s coloring makes everything pop and adds distinction when multiple characters are in the scene, even when they all have similar uniforms. While the issue’s story felt light to me, the art did not disappoint.

Red Hood: Outlaw continues to be a mixed bag for me. Pretty to look at, but nothing of real substance happened, outside of everyone returning home because the plot demanded it. It was certainly entertaining on the first read-through, but didn’t hold up on revisiting. Despite some misgivings, I’m looking forward to seeing the Outlaws reunited again. – Javier E. Trujillo