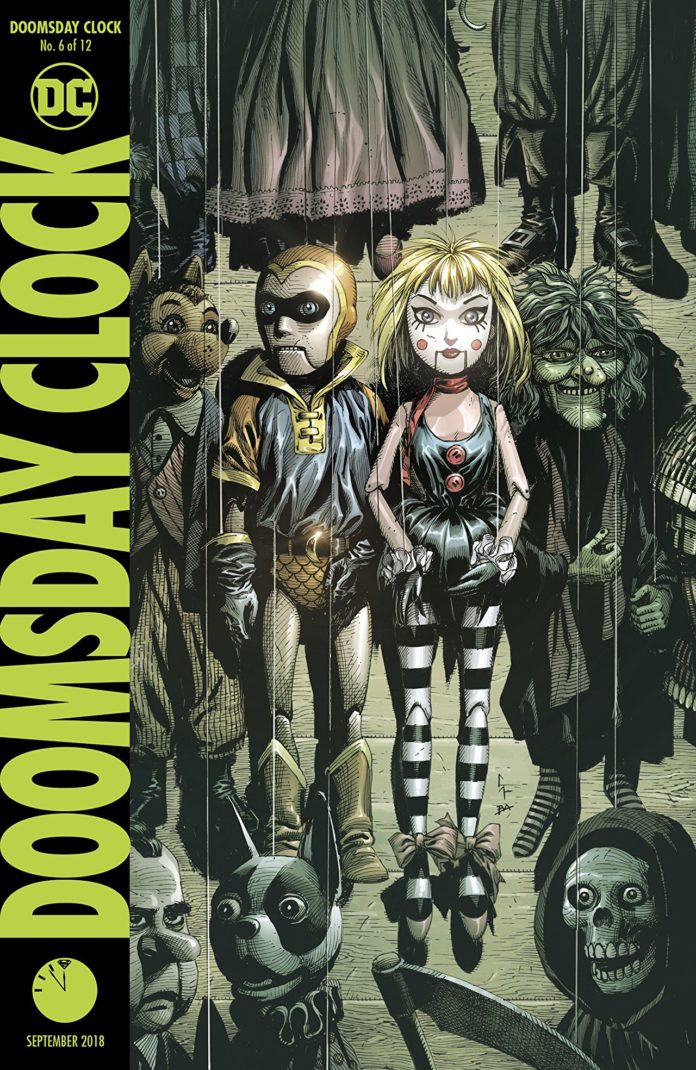 We have reached the halfway point of Doomsday Clock, from superstars Geoff Johns and Gary Frank. It’s taken us a little longer than expected, but it’s been a great ride.

Last issue, the Clown Prince of Crime finally entered the picture, and he plays a pretty big role here. Mime and Marionette are escorted by the Joker and his men, but find a way out. Appreciating their unpredictability, and violent talents, he doesn’t get mad and eventually accepts their apology. The three then continue on to a meeting of villains below Gotham, which ends in a violent interruption from the Comedian. Meanwhile, we find ourselves going back in time witness the origin of Marionette and the Mime.

Though we can grow a little impatient for the release of each chapter in this story, the pacing of each issue is never a problem. Clocking in at over 30 pages, I blew through DC #6. It’s fantastic. Johns has been planting the seeds for 5 issues, and now he’s letting worlds collide and characters to interact. But the heart of this issue is definitely in its flashbacks. Marionette feels like the Watchman world’s Harley Quinn. She has spunk, sass, and charm. She’s also unapologetic and unpredictable. Johns has struck gold with her, and I can’t wait to see what he puts her through the next 6 issues.

This is a Batman site, so how does The Dark Knight fit into this issue? He was served up to The Joker last time, and spends these pages getting transferred, chained, in a wheelchair. He’s paralyzed thanks to a new toxin, the “Relax-a-Bat”. His dialogue is irrelevant (“juh, juh”) but that’s okay. Our hero is going to bust loose and play a large role in the coming issues.

Gary Frank is a premiere talent. I’ve said before I can understand why this book takes a while to get out. So many pages follow the Watchman formula of 9 panels, and this art is exquisite. The detail on the settings, characters and atmosphere are second-to-none. But there’s something about the eyes. Frank does such a good job bringing emotion to the face, and making the eyes the focus. I love it. My personal favorite part of this issue (to look at) was the gathering of the villains. Seeing the Penguin, Two-Face, Riddler, Scarecrow and more for the first time was exciting and worthy of a nerd freakout.

I know I’ve mentioned this book can make us impatient, but that’s a compliment. Each issue is really, really good, and this may be the best one yet. Johns and Frank have set up their dominoes for six issues, and I feel like their about to tip it over. So settle in. Doomsday Clock has found its groove. – Ryan Lower