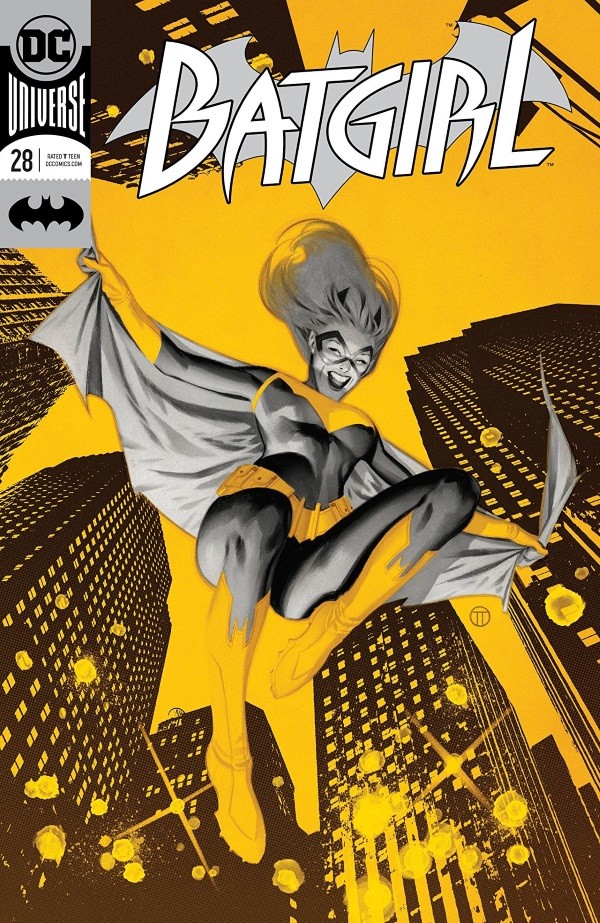 SYNOPSIS: Even millennial superheroes are moving back in with their parents! While recovering from the injuries she suffered battling Grotesque, Barbara Gordon’s been living with her police commissioner dad while she recuperates. To get Barbara out of her funk, Jim Gordon hires her to do some I.T. grunt work at the GCPD. Unfortunately, he just gave full security clearance to one of the best hackers on the planet! Batgirl now has access to the police database in hopes of capturing Grotesque…who also seems to be using the database as well! Is this an inside job?

The main cover for this issue is provided by Julian Totino Tedesco, his first for this series. It’s a fun, if rather generic, image, with a style and texture similar to some of the variant covers from Joshua Middleton, who turns in another fantastic piece for this month’s issue. I love the way he uses the two light sources of Barbara’s laptop and exterior light pouring in through the clock face of her secret clock tower base.

We jump into this issue where the last one left off, with Batgirl, a dead body, and the police on the scene jumping to conclusions. Babs uses her physical skills to escape rather than try to explain her way out of it, and these crazy GCPD cops just let the bullets fly! Sheesh, irresponsible – but I guess we needed some action in this issue. After this, we learn some more about what’s really going on with the new Grotesque, and there are a few new wrinkles. And a bunch of green stuff. I’m not too invested in this villain, but maybe I would be more so if I was also reading Nightwing, as there’s some crossover going on.

Babs makes her way back home and promptly gets into another argument with her Dad. It’s kind of a retread of a scene from the last issue, but I suppose that’s true to family spats. Fights with loved ones rarely resolve completely over one interaction. Like before, the two share their frustrations and fears, express their love and support for each other, and end up on a good note. Also, daaaamn, check out the Commish’s pecs at the bottom of page 11. Homie’s been doing his pushups.

Unable to sleep, Babs dons her night gear and heads to her old Clock Tower HQ to do some research. She does some hacking, reevaluates her memories, and… well it doesn’t make a lot of sense but it leads her to the next phase of the villains’ plan and sets the stage for the next chapter in this story arc. To the museum!

More importantly, Batgirl’s new/old costume she’s been wearing has a little backpack under the cape, the straps of which wrap around to connect to the bat symbol on her chest. It looks cool and all, but my question is: what’s she got in there? Is it just utility belt overflow, or is she packing a lunch? Looks just about the right size for an egg salad sandwich and a plastic baggie full of potato chips. And it’s yellow so it could hide the stains. I mean, it would be silly not to use it for that. – Rob Veatch III

Classic Comics – THE BRAVE AND THE BOLD #200