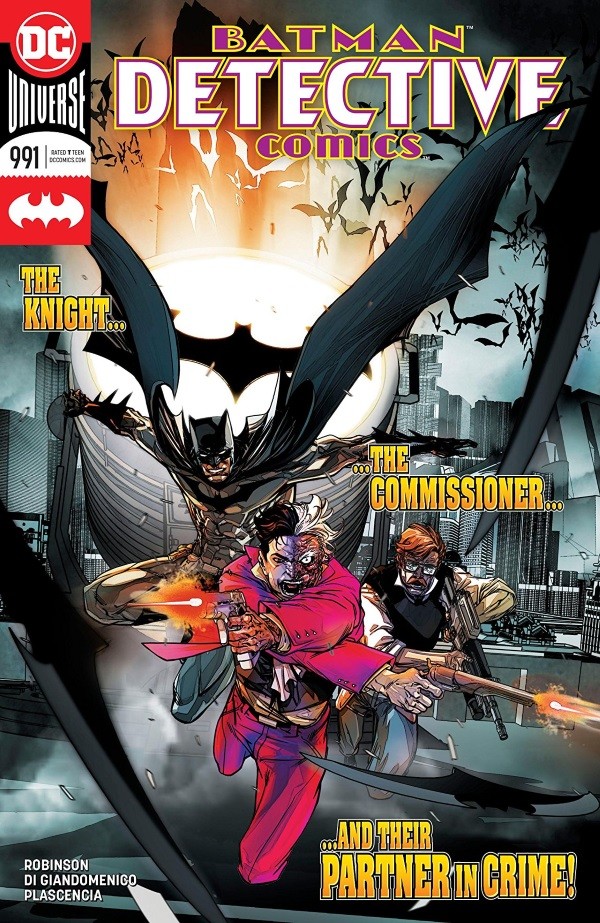 Detective Comics #991 is James Robinson’s deepest story since coming back to Gotham. I will even say this one issue is more expressive than his recent stint on Wonder Woman. The reader will get vibes of golden, silver and modern age stories all in one.  That might be the most impressive thing about the issue.  There is a lack of action that you will notice since the book is unbalanced in favor of story and depth.  That does not take away from how well-written Two-Face is in the story.

Robinson has done something that I don’t think we have ever seen with Two-Face.  He has embraced wholeheartedly everything about the character.  As you read, you will find yourself saying, “that’s a golden age moment” from Two-Face’s less serious days. Then before you can react Robinson delivers a moment reminiscent of O’Neil/Adams or even The Long Halloween.  The number two, the spilt conversations with both personalities, this is a beautiful homage to the character.

Sprinkle in some wonderful moments with Gordon and Batman on a rooftop. It doesn’t get more Bat-tastic than this BOFers!  The story is pretty heavy as you are dealing with both Dent and Two-Face.  Robinson was doing a fine job in previous issues balancing the weight and stress within the story with action pieces until now.  You will need to go back and do some rereading, as there is a ton of dialogue to breakdown, Dent really went out of his way to confuse Batman and Gordon. Unlike most villains, Batman and Gordon do have a soft spot for Harvey Dent and Robinson does a great job having those moments come though.

Providing the interior artwork for the issue is artist Carmine Di Giandomenico.  Di Giandomenico art is nothing short of fabulous. Aerial shots of Gotham’s skyline, heavy emotion, Di Giandomenico makes you look past the lack of action.  The angles and shadows used to create a Batman who is stoic and heroic.  I will put this issue up with any Barrows issue from Tynion’s run.  The panel placement and shadows are worth noting when Dent or Two-Face are talking allowing the reader to focus on the dominant personality. I cannot praise Di Giandomenico enough, the panel backdrops have a great amount detail and you can see the effort and time in each one. I’d love for Di Giandomenico to return to Detective again.

I always believed Batman doing detective work in Detective is a must. Robinson’s latest murder mystery is satisfying a craving that I feel we all have had for some time. Robinson has crafted another classic story post Rebirth. While this particular issue is heavy the artwork from Di Giandomenico and how Robinson has written Two-Face are remarkable and allows you to look past the lack of action. I say this story is a must-have for your pull list!