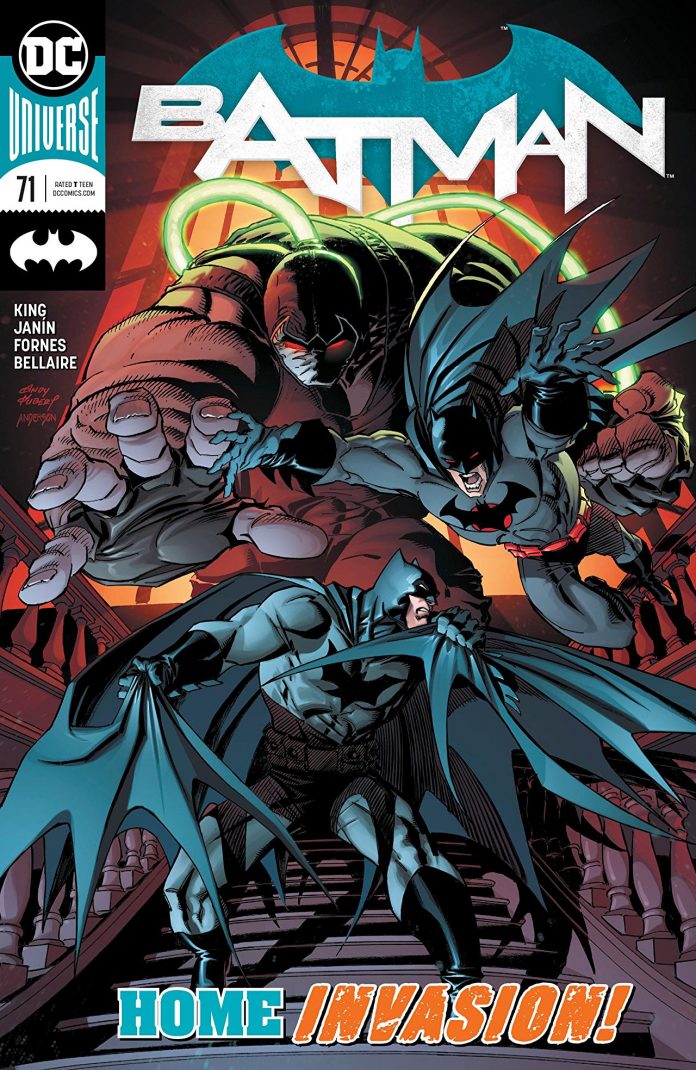 SYNOPSIS: “The Fall and the Fallen” continues! Will it be father and son working together, or tearing each other apart? When it comes to the Waynes, expect a little of both. In the quest to get Bruce Wayne to hang up the cape and cowl, Thomas Wayne is going to have to use a little tough love. Only, not all the muscle behind it will be his own.

For weeks, Batman was strapped to an evil dream machine that pumped his head and heart full of “Knightmares” to make him question his life, love, and everything in between. He never had any idea where or when he was, and neither did we.

Finally, in issue #70, Batman freed himself from the bowels of Arkham Asylum and turned the tables to terrorize his tormentors. All but two. The two who put him there in the first place. Another reality’s version of Batman (who’s also his father, Thomas Wayne), and the Devil of Santa Prisca himself, Bane.

And as Batman pinned the last of Bane’s lieutenants against a wall the hard way, he promised the painfully appointed messenger that he was going to do two things: go home and take a nap, and come back tomorrow his an army of his own.

Tomorrow becomes today in issue #71; the “Knightmares” might be over, but the time shenanigans clearly aren’t. Writer Tom King immediately drops us into two timelines that alternate and ultimately culminate in a way that’s probably as far away as possible from how you thought this one would go.

The “Earlier” portion of the story, drawn by Mikel Janín, shows Batman’s assembling of the army he promised to bring to Bane’s doorstep. The rest of the issue, drawn by Jorge Fornés, depicts a fallout that’s damn nearly as surreal as the frights of fancy our hero’s been dragged through recently.

As always, the book looks like a million bucks. Janín’s depictions of the Bat Family marshaling to their patriarch’s side high above Gotham City are handsome and bold, while Fornés brings weathered realism and intense intimacy to the aftermath (in which, ironically, most of the “action” actually happens). It’s so effective: Janín’s pages will get you fired up, regardless of how Fornés’s pages are slowly showing you what’s up. (Unless, of course, they aren’t. It’s open to interpretation.) Colorist extraordinaire Jordie Bellaire is there when it all crashes together, slamming the heroic hues with which she imbues one half of the issue against the murkier, earthier tones she applies to the other.

When Selina Kyle deliberately disappeared before her wedding to Bruce Wayne at the end of issue #50, I worried we’d get yet another batch of stories of Batman unpleasantly dealing with loss and grief. It’s been done. A lot. But King has kept things original and unique, albeit occasionally unpleasantly.

This issue really doubles down on the tough stuff, which means you’ll either hate it for taking such a swerve or love it for doing the opposite of what you thought it would do.

I trust Tom King, so I’m happy to roll with it.

Even if you don’t like it, there’s one thing we’ll all agree on: It’s far from over. – John Bierly