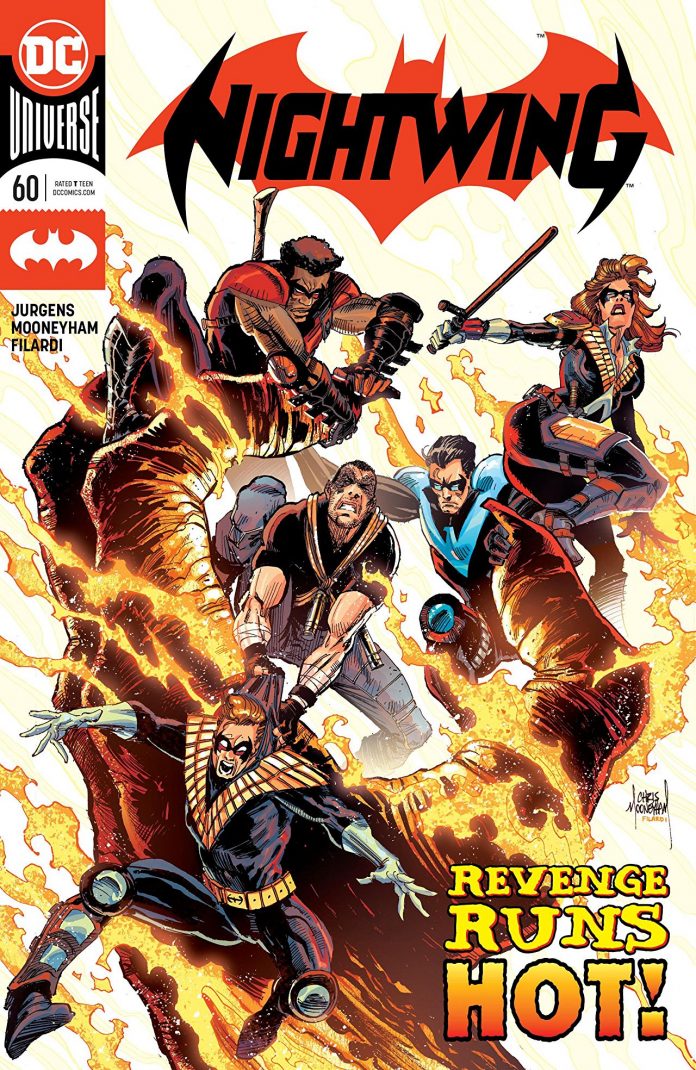 SYNOPSIS: Detective Alphonse Sapienza may be a natural-born leader, forged through his many years with the GCPD, but does that give him what it takes to lead the Night-wings when their lives are endangered as never before? As fires that seem to have a mind of their own rage through Blüdhaven targeting cops, the team is up against its greatest test yet. Joined by Ric Grayson, how will the Nightwings save the city’s finest from a red-hot vendetta and the city’s newest villain, Burnback?

If anyone out there has been taking a break from NIGHTWING because of the whole Ric Grayson name change, you’ll be happy to know that he lets someone call him Richard in this issue!

Not that Grayson’s name should matter too much. I mean, it’s what you *do* that defines you, right?

After helping the new Nightwings rescue someone from a burning building, Grayson realizes that despite his memory loss he has an automatic instinct to put himself in danger to help others. It’s not an entirely new sentiment as he had a similar revelation while taking down the Scarecrow.

Grayson also shows a bit more humor than usual, coming up with nicknames for some of the new Nightwings, calling Detective Sap “Nightwing Prime” and Malcolm “Nightwing Red.” I will say that’ll make reviewing these issues a little easier!

In an aside, Sap does get the best, most-comic book-y line of the issue while contemplating his decision to become Nightwing Prime by saying, “Wear a badge long enough and you’ll see more than your share of sad endings.”

I’m happy that the team dynamic continues to have some drama. When the new Nightwings welcomed Grayson to the team I was worried the follow-up issues would skip ahead to them as a fully-functional unit. But, along with some hesitant team members, we have Nightwing Prime still cautious about letting Grayson enter the inner circle.

However, it’s the inner circle stuff where the issue stumbles. We got some great background info on Nightwing Red in NIGHTWING #59, and here Dan Jurgens and company try to link a character from his past to the string of arson attacks in Bludhaven. It’s a real stretch and just comes out of left field.

Had there been a few panels included where Colleen or Detective Svobota found evidence that leads the team to suspect this person maybe it would have clicked better. We’ll see how it plays out.

All in all, a fair issue but a bit of a retread with a rushed plot development. – James Armstrong

What Should Warner Bros./DC on Film Learn From ENDGAME and the...