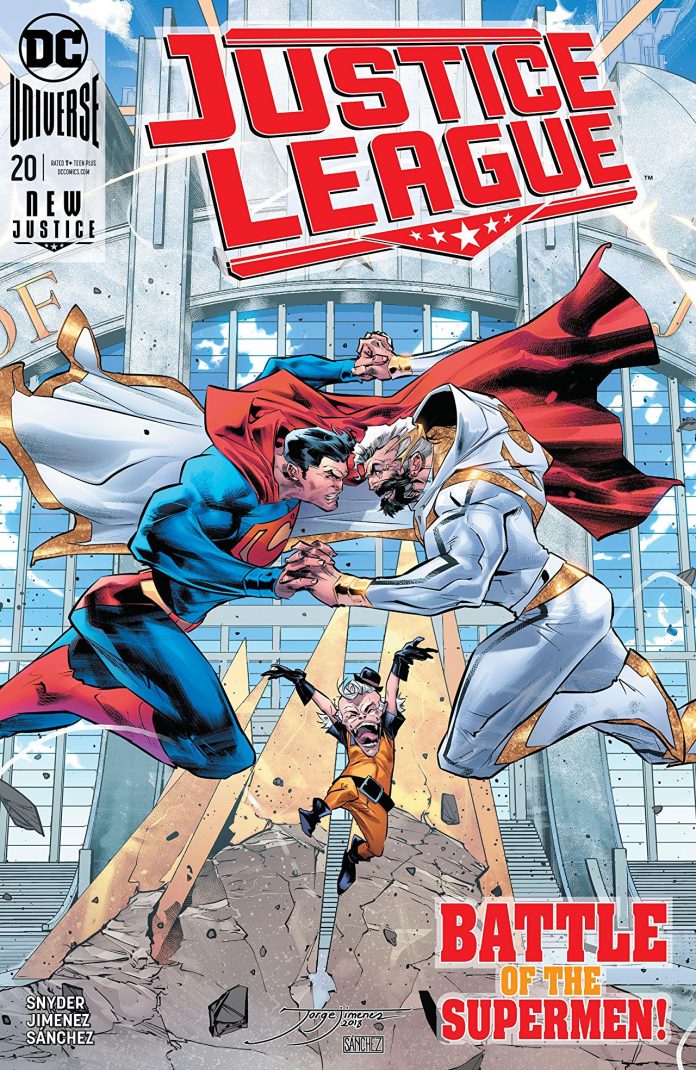 SYNOPSIS: “The Sixth Dimension” part two! The Leaguers come face to face with their future selves in the Sixth Dimension and explore the path that lies before them. Meanwhile, Superman is trapped on a world with no light and hundreds of dead Supermen! Can the Man of Steel escape before his powers.

The Justice League, led by who they believe to be a future Superman, has arrived in the “6th Dimension,” a kind of central-control level of existence beyond space, time, and imagination.

They aren’t alone however, as they are met by older versions of themselves who have established the 6th Dimension as a new base of operations, one with an expanded scope of impact.

Meanwhile, the actual Superman is hopelessly trapped in a sunless prison universe designed to be his doom.

The Justice League meets more than an aged Superman in the 6th Dimension, as every attending member also encounters a future version of themselves. Some have merely experienced the passing of time (white-haired Clark,) some have new relationships (Martian Manhunter and Hawkgirl as parents,) and others have taken on expanded roles and responsibilities (Whoa…Green Lantern and Flash literally remaking reality!)

Justice League #20 is written by Scott Snyder and drawn by Jorge Jimenez and immediately follows the conclusion of issue #19. It is really a treat to have Snyder and Jimenez back together again as the content they produce is of the highest quality here. The two work so well together, each elevating the other’s work and it should be noted that, for the second concurrent issue, both men share plotting credit. It’s a detail that shouldn’t be missed as the two are truly crafting these issues together. The results speak for themselves.

There are two segments of the issue that exemplify the partnership between the two creators.  Following the reveal that Superman is not actually in this future dimension but in a bleak, sunless, desolate prison universe, it is clear that things are not all as they seem. As a result, there is an uneasy feeling of tension that outlines every scene and character interaction. The words and artwork are so bright and promising, but on some level, we know that the hope is false and Snyder and Jimenez are intentionally building dread in the reader’s mind in place of the optimistic future they present. It’s skillful work on a level that I don’t believe we’ve seen on this title to this point.

The creative team delivers again in a double page spread of backstory. We’re finally given a bit more information on the Perpetua’s role as creator of the multiverse and a member of a group of “Super-Celestial” beings. Using the 7 unnatural energies, she formed the multiverse into a vicious weapon and unsuccessfully tried to use against the others of her kind. Snyder parses out details slightly, but it’s Jimemez’s art that allows what is given to take shape and engage the reader through clever use of panel work, character staging, and representative design. As a reader, I’ve been hungry for insight into Perpetua’s character and backstory for some time. While there is plenty more to reveal in the future, the work here was engaging and satisfying enough to stave off frustration and keep me looking forward to the next issue.

Justice League #20 is a high point in the title’s current run and moves the New Justice narrative forward with a bit of reveal and a lot of intrigue. It cannot be missed by anyone already enjoying this run, a more classic JL line up, or a good superhero mystery. – Garret Grev