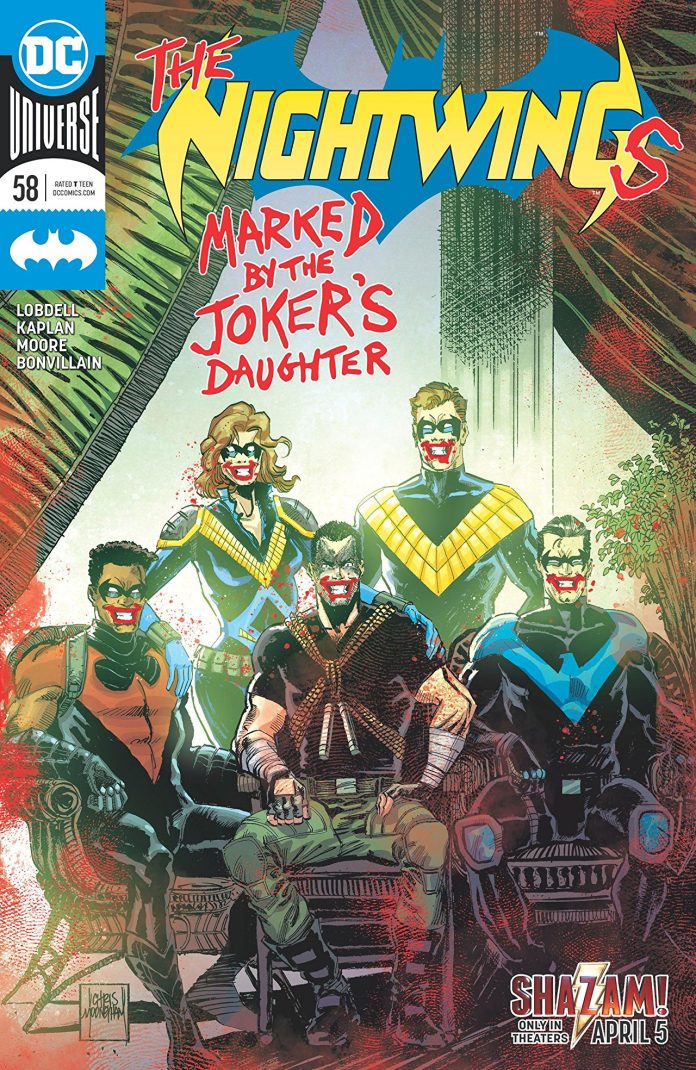 SYNOPSIS: The Joker’s Daughter is back! Or is she? While she wasn’t shot in the head like Nightwing, Duela Dent might be facing an identity crisis even more traumatic than Ric Grayson’s. Fortunately the new Nightwings are doing their best to protect Blüdhaven-learning as they go-allowing Ric to try to help steer Duela away from the life of a homicidal zealot of the crazy Clown Prince of Crime!

This month’s issue takes place right where the last one left off.

Councilman Pollard, the man trying to close Bludhaven’s largest homeless shelter, has had his face mutilated by “The Joker’s Daughter” Duela and is being forced to suicide bomb a club full of well-off society members.

In the ensuing panic, Duela declares, “Just wait until they get a load of me.” That’s gotta be a reference to Jack Nicholson’s Joker. This was all the more pleasing since whenever I hear about a daughter of The Joker it reminds me of a rumor that such a character was envisioned for the abandoned third Joel Schumacher Batman film.

Although, as I wrote in my last review, Duela has a long history in the comics and I was way off on where she came from. Nevertheless, had such a movie been made it would have been in continuity with BATMAN ’89 giving us a Jack Joker daughter. I truly hope that the “get a load of me” line was tossed-in as a way to imagine what might have been!

The Nightwing team, still enjoying some goodwill following their victory over the Scarecrow, respond to Pollard’s bomb threat and have their first clash with their new nemesis.

Beforehand, we revisit one of my favorite subplots from a previous issue and learn a bit more about Zak, the youngest and most reluctant member of the Nightwing team. Apparently, Zak’s dad was also a police officer and wasn’t excited about his son becoming a cop, thinking he’d feel responsible if Zak got killed.

This creates an interesting dynamic since Zak’s sister Colleen, also on the Nightwing team, became a police officer before him and no mention is made of their father being reluctant to see his daughter join the force.

Ric Grayson is still happy to let the Nightwing team take the lead in crime fighting, but his limited membership leaves him yearning to do some good. This may not include dawning a mask again but it’s a world away from the practiced apathy he demonstrated following his amnesia.

Ric’s change of heart is noticed by Barbara Gordon, who shares a sweet moment with Ric before leaving town.

NIGHTWING #58 is a quick, solid story. Maybe a little too quick since as soon as I was done I swore there should be at least four more pages to go. – James Armstrong

OPINION – The Case for a Doctor Fate Movie by Robert...