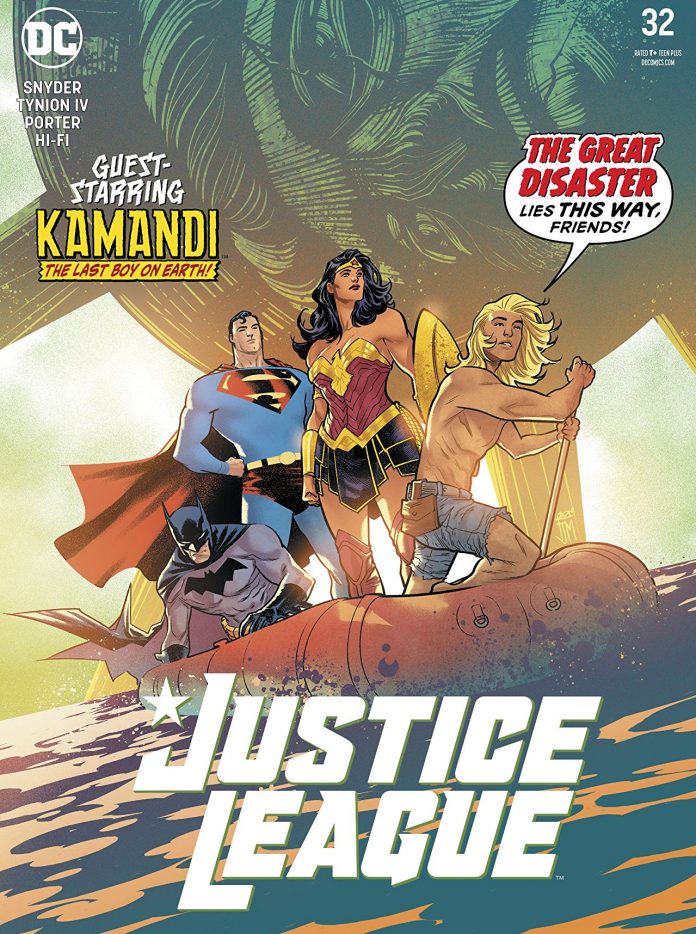 SYNOPSIS: “The Justice Doom War” part three! Things are getting dangerous across the time stream. On one side of time, the Justice League team finds heroic purpose; on the other, it’s a future full of chaos and trial. It’s the Totality in action. If they can’t stop Lex’s Legion across all fronts, there may be only one other option: embrace Doom!

Weezer is one of my favorite bands of all time. I loved their first two albums more than any albums I had ever heard at that point in my life (I was young.) Their third album “The Green Album” came out later and it was super fun, full of hooks, singable lyrics, and everyone liked it a lot. But something felt like it was just off. It wasn’t bad, I still really enjoyed Weezer’s music, but something felt like it had slipped away

I’m starting to get a similar questioning feeling about Justice League.

Not really a bad one, just something tickling at the edges of my reading experience starting to ask “Is this as good as it used to be?” All the same great elements are there. It’s still an expansive and in-depth story being told with near-countless characters with our heroes battling to save all of existence, but the edges seem to be fraying just a bit.

Scott Snyder and James Tynion IV continue their ongoing story arc in Justice League #32. The things from my last review (you can read it here on BOF) still work and elements that didn’t land as well still don’t.

Green Lantern and Flashback in time-fighting the Legion of Doom from puppeteering the Attack on Pearl Harbor is still great. The writing in this section is just fantastic, providing some excellent character interactions between “our” Green Lantern and The Flash, and their respective counterparts. These moments really land, as the characteristics of each person are on display and play off each other well. They also begin hinting at — and unraveling a bit — a larger connection between them all beyond having the same moniker and color motifs. A surprise (and well-timed) appearance from an unexpected hero serves as an exclamation point on this, the best element of the book.

The Future stuff still feels off. Komandi’s re-introduction was fun last issue and continued to show how expansive of a canvas Snyder and Tynion are working with, but his inclusion hasn’t had any real impact on this story, save for setting up an awkwardly long and wordy monologue for Wonder Woman. It’s a prime example of Tynion’s worst tendencies and felt strange and distracting.

The Justice Legion looks cool, but the dialogue between “our” Batman, Superman, and Wonder Woman with their future counterparts is lifeless and nowhere near as well-executed as the League members’ in the past. There’s a near fight, fight, and future fight teased for next issue, but otherwise, there isn’t much of note in these sections that really moved the plot along.

Now, there are some other things that succeed here to varying levels. The space battle between the Thangarian fleet and Luthor’s forces looks great, the Legion of Doom’s interactions with Apex-Lex are great and hint at their concerns with Perpetua’s plans in the face of Luthor’s pure faith in her, and the final page teasing at the battle to come in the next issue were strong. However, the art on this issue was not as well executed, unfortunately.

I mean no disrespect to Howard Porter, who took on the art duties for the issue, his work itself is just fine. I think there are some issues with perspectives and proportions, but they actually come off more as a stylistic choice than miss-execution. Characters’ head-size and body proportions, for example, were tough for me to look at and pulled me out of the story the first time I read the issue. Facially, characters are a bit blocky and cartoonish, but Porter’s movement is strong and dynamic, and he’s able to build great battle scenes with real kinetic energy based on figure staging and framing. So, while the art feels odd or out of place, I believe this is really a rough transition in approaches and style to Mr. Porter from the beyond talented Jorge Jimenez.

Overall this is still a quality book but does not reach the heights of previous issues. The run has hit a series of B grades for me and that’s disappointing from what had been a Grade A book. – Garret Grev