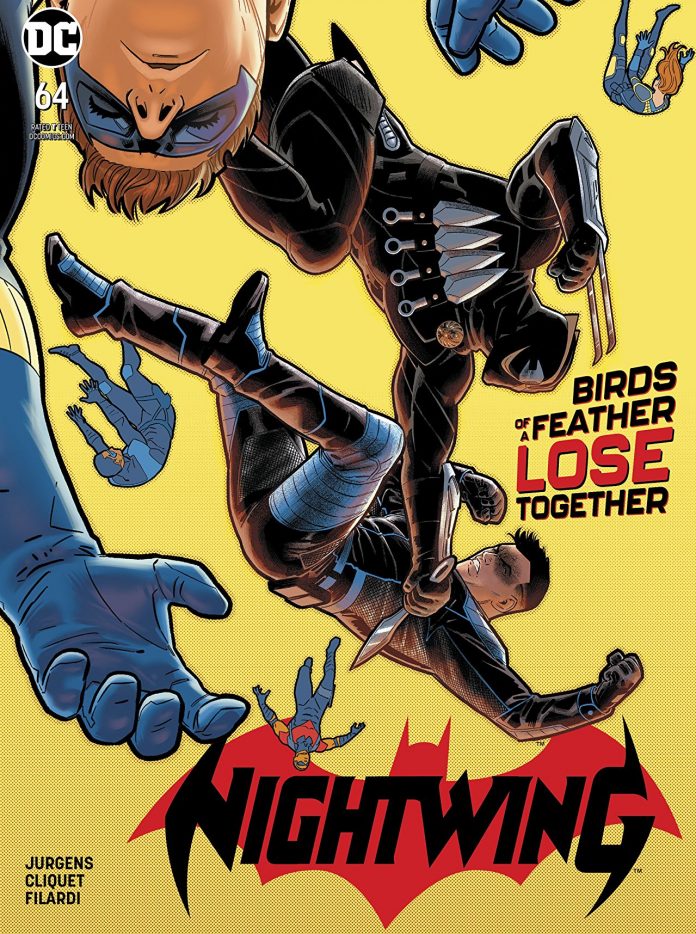 SYNOPSIS: Blüdhaven explodes in violence as a riot erupts in the streets. Ric can’t face this alone, so he’ll have to enlist the support of the Nightwings. Meanwhile, Talon has taken Bea captive to lure Ric into his grasp and reintroduce him (for the first time, in Ric’s memory) to the Court of Owls.

NIGHTWING #64 ends with the kind of twist that you really need to meditate on to fully take it in.

As of writing it’s the middle of the night, I just finished reading the issue hours ago and after reflection…I think I’m down for what Dan Jurgens is planning. A part of me is concerned that it could just turn into a retread of a previous story arc but mostly I’m excited to see what we’re in store for.

Anywho, Talon has struck! Team Nightwing member Zak Edwards has been wounded, perhaps fatally, and the rest of the Nightwings are racing to stop Talon before he hurts anyone else.

If only Talon hadn’t appeared in the middle of a city-wide riot.

Bludhaven is still experiencing rampant looting set-off by the power outage in the last issue. Team Nightwing responds as best they can, getting some cheers along the way but mostly struggling to control the situation. It’s not just a physical toll but an emotional one as well, as one member of the team wonders out loud if the people of Bludhaven are even worth fighting for.

Racing through the street does lead to my favorite moment of the issue. Grayson, in costume, leaps onto a moving fire truck and asks the crew if they were headed to the same place he was … and they just go along with it and answer his question. No second thoughts about chatting with a vigilante while responding to a call.

In the last few issues, there have been moments where I thought Grayson (drawn again here by Ronan Cliquet and colored by Nick Filardi) has white hair around his sideburns, which seemed odd since he’s still young…or at least young for a 79-year-old comic book character. In NIGHTWING #64 it was more clear that Grayson just shaves around his ears and it’s pale skin showing.

It’s not the best look for Grayson but I imagine this haircut does makes it easier for him to put on his oil grease mask.

There were two pages (specifically pages 11 and 19) where the color grading for some lettering looked a little off. Look closely at the backward ambulance lettering and the sign for the Prodigal Bar and tell me what you think. They look hastily pasted on.

NIGHTWING #64 opens a new door in Grayson’s journey that once again puts his past life in conflict with his new one. – James Armstrong

Colin Farrell Can’t Wait to Get Back to Work on THE...