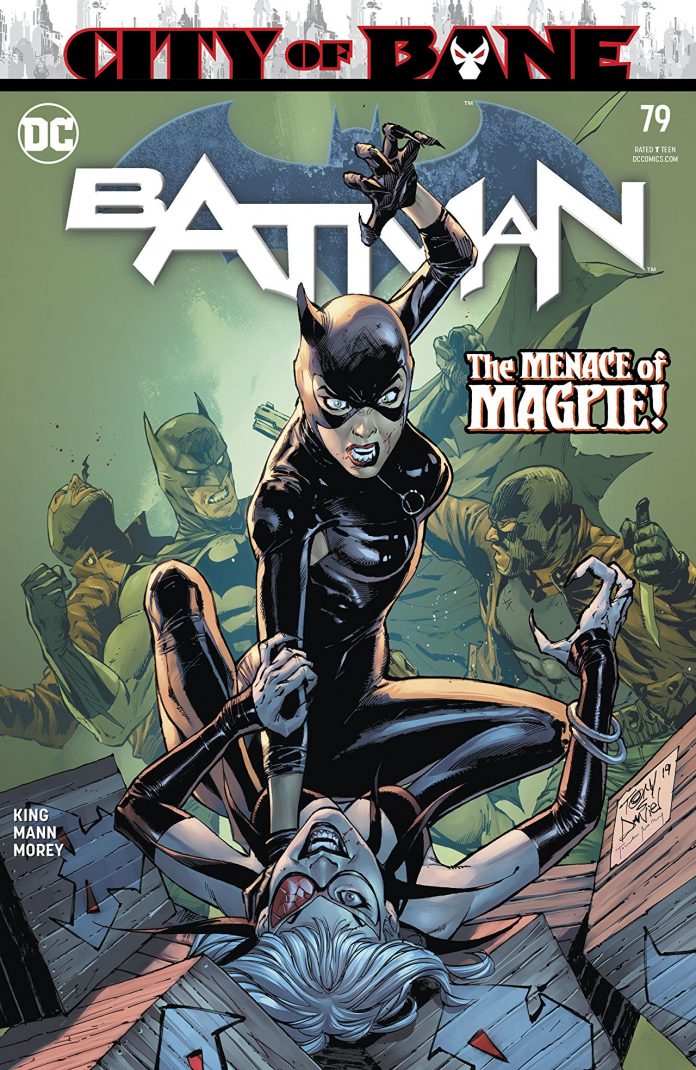 SYNOPSIS: In the concluding chapter of the two-part “City of Bane” interlude, Batman and Catwoman pull a job to stop Bane’s supply ship from smuggling dangerous cargo into Gotham City. It’ll send a message back to the big guy that his reign of terror is soon to be over…but what does it also signal for the future of Bruce and Selina?

BATMAN #79 still doesn’t address that crazy, impossible thing that Bane did in front of a captive Damian Wayne two issues ago as Not-Thomas-Wayne lectured his not-grandson on the consequences of breaking Bane’s rule of no Bat-Family allowed in Gotham City. In fact, there’s even an editor’s note that says #79 takes place before #77; this means that #78 happened before that one, too.

So, though we don’t find out what happened when Bane — who, as I noted in my previous review, has a whole slew of illusionists, hallucinogens, mind-benders, and shape-shifters in his employ — did the thing, writer Tom King finally does resolve that long-running spat between Bat and Cat over whether they met on a boat or on the street. The answer has a heavier hand than Hellboy, but it’s sweet.

In between scenes of Bruce Wayne (as a MAGNUM P.I.-ified Matches Malone) and Selina Kyle learning how to love each other again (which turns out to be just like riding a bike), Batman and Catwoman train for a big heist of Bane’s Venom from a supply ship off the coast of Hawaii by clobbering their way through the Aloha State’s criminals, creeps, and costumed villains, all of whom put up a bigger fight than the shipment’s big boss, Magpie. The action is great, but make no mistake: This one’s all about Bat and Cat.

And just because they get the stuff, we still don’t know how they plan to use it. Please, please, please tell me that “City of Bane” doesn’t culminate in Bruce’s and Selina’s shooting up a bunch of junk literally to beat Bane with a taste of his own medicine. (I thought the sans-Venom Bane that King gave us earlier in his run was a lot more interesting than the drugged-up version anyway.) There’s a lot of beautifully written and cathartic emotional stuff in these last two issues that ticks all of my boxes, but I hope this tropical detour turns out to have been worth it in the bigger picture. I continue to believe it will be.

Yet again, art admiral Clay Mann and color commando Tomeu Morey hand in a master-class clinic of handsomely depicting people, places, and things. (The sunset panels King originally teased in a Tweet for issue #78 actually do appear here, thankfully.) Selina’s posture when Bruce finds her sitting on the beach. The flex of their muscles and the power in their poses across seven panels of strength training. Their lean, lithe limbs in the moments before lovemaking, the variety of villains (especially the samurai guys) they tussle with, the energy in their action, the emotions in their faces and eyes. All of it is perfect, and it’s perfectly framed by lighting that brings alive every imaginable variation of dawn, daylight, dusk, and darkness. The orange lights of Magpie’s yacht write their reflections across shimmering waters that linger beneath clouds kissed by the ivory lips of a glimmering moon, while teals and ambers lend their glows to lovers in a lagoon. All of it is gorgeous. All of it is glorious.

My fellow romantics will discover much to savor here, while those losing their patience with King’s deliberate pacing can hopefully find enough character stuff to ease their frustrations. That being said, I’m ready for Bruce to get the hell back to Gotham and send the devil back to Santa Prisca the hard way. – John Bierly