SYNOPSIS: After learning of the deadly League of Lazarus tournament, Damian Wayne has a new mission: winning the tournament and prove he is the greatest fighter in the DC Universe! But first he must find the secret island where it’s all going down! This brand-new solo Robin series will force Damian Wayne to find his own path away from both sides of his family! New mysteries! New supporting cast! First appearances of new characters! And lots of fights! 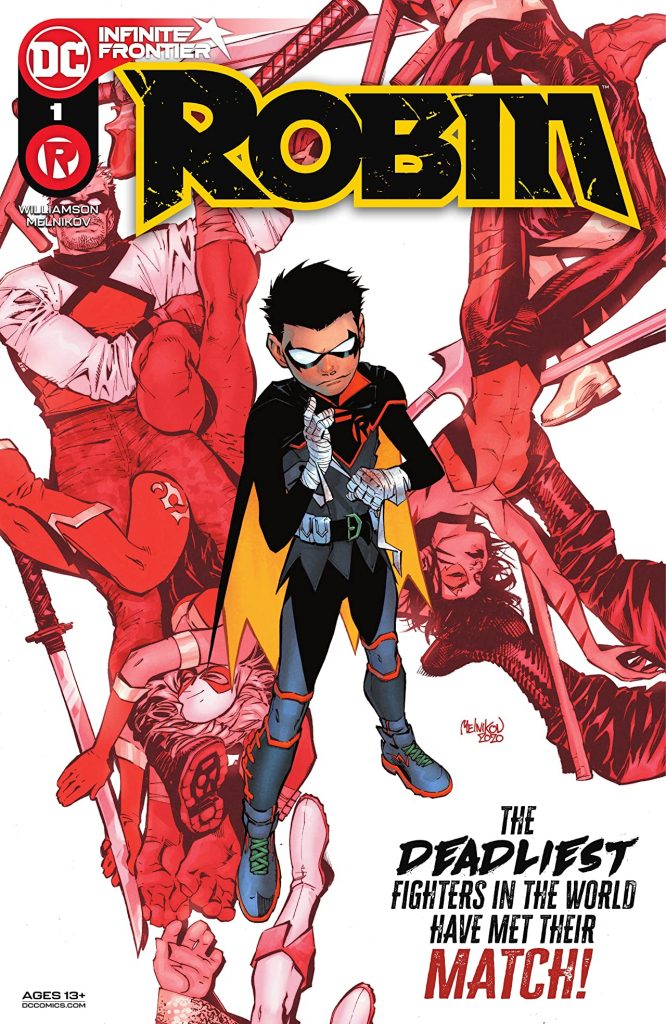 Cover dated January 1991, I was all of 13 years old when the first Robin mini-series came out. I was roughly the same age as the protagonist, Tim Drake, and that gave the series a sense of relatability to me as I could place myself in those situations and ponder how I would handle it. To me, it felt like Tim was in way over his head, traveling abroad with strangers and taking on a dangerous martial artist and crime lord going by the name of “King Snake” without a Batman in sight.

Tim survived his inaugural adventure, leading to Robin II, Robin III, and finally his own ongoing series, Robin. Tim made it all the way to 2009 before transitioning to a new title, Red Robin, after the arrival of Damian Wayne and his taking, some would say usurping, the mantle of Batman’s partner.

Robin: Son of Batman and We Are Robin followed, but neither title has had the longevity that Tim Drake’s solo book had.

Damian as Robin has known his fair share of fan controversy, being divisive right from the moment he drew a sword against his father’s throat in Batman #656, not to mention decapitating the Spook and pummeling Tim into unconsciousness the next issue. This Robin, the son of Bruce Wayne and Talia al Guhl, was lethal.

Under the respective pens of Grant Morrison and Peter J. Tomasi, Damian’s character gained depth and a small fanbase. I softened to him and began to enjoy the character. He even died, causing his father to go against the Justice League and travel to Apokolips to resurrect him.

That brings us to 2021. I’m 43 now and reading Robin #1 again, but this time Damian Wayne is striking out on his own, starring in his own solo book as he fights his way across the DCU.

It’s no accident that this new Robin #1 has Damian fighting King Snake when we first catch up to him. My mind immediately snapped back to thirty years ago, but instead of feeling worried for Damian, I wondered if King Snake would make it out of the ring alive! After all, his son, Bane, killed Alfred in front of Damian’s eyes. Was payback due?

Williamson gives us lots of little character moments. Yes, Damian is as overconfident, brash, and arrogant as he ever was, but Williamson also shows a softer side to the young hero. He’s generous with his treasure, helping out a family in desperate need, and also reads some manga in his downtime. That feels frivolous for one usually so serious but makes him feel more relatable, while at the same time, his commentary on the story shows that like his dad, he’s always thinking about having a plan.

The most telling moment is that while he’s reading, the ghost of Alfred comes by to visit. Clearly, death is still weighing heavily in his mind and I appreciate that Williamson is acknowledging this in his narrative. It feels like that infamous issue of Batman came out forever ago and the ramifications are still being felt, rightfully so. The fact that Damian started off by coldly addressing Alfred as “Pennyworth” and looked down on him as just a servant when he first joined the Bat-Family, to now viewing him as a grandfather he is mourning speaks volumes to how he’s grown into his relationships.

I’m not terribly familiar with artist Gleb Melnikov and his name is relatively new to the DC roster, but he impressed me right from the opening page! His style is evocative of so many other artists, like Greg Capullo, Humberto Ramos, and Jorge Jiminez, and is an excellent fit for this title. His Batman is perfect, too, and Melnikov establishes a moody Gotham City that I hope we return to very soon.

I’m going to put myself out there and say I like this new Robin costume for Damian. It eschews the typical red, yellow, and green and favors black and grey with red highlights. It definitely feels more like a “Future-Batman-in-Training” outfit, which befits Damian’s usual attitude. What’s also interesting to me is the lack of green, a color also associated with Ra’s al Ghul and the Lazarus Pit. Could this be a subconscious refuting of half his heritage?

The main thrust for this title is Damian seeking out the League of Lazarus tournament, something hidden from him by his mother and grandfather. It feels very timely as a new Mortal Kombat movie is being released and there are a few similarities to that fabled tournament.

Given the spotlight Tim Drake got in Future State, I was a bit surprised that Damian is getting a solo book in this post-Infinite Frontier DC Universe (or is that Omniverse?). However, Williamson and Melnikov have already hooked me in, especially with former Green Arrow Connor Hawke lurking in the background. Williamson clearly has a grasp on DCU history and characters and Melnikov’s art brings youthful energy. This was a solid debut issue that had me get emotionally invested in Damian and delivered a shocking cliffhanger of an ending! Don’t let any preconceived notions of Damian stop you from giving this book a try! This book oozes potential and promises to be lots of fun in the months ahead! – Javier E. Trujillo

SYNOPSIS: The penultimate issue of the acclaimed return to Batman Black & White is here with a look at some of Gotham City’s most twisted and compelling souls. 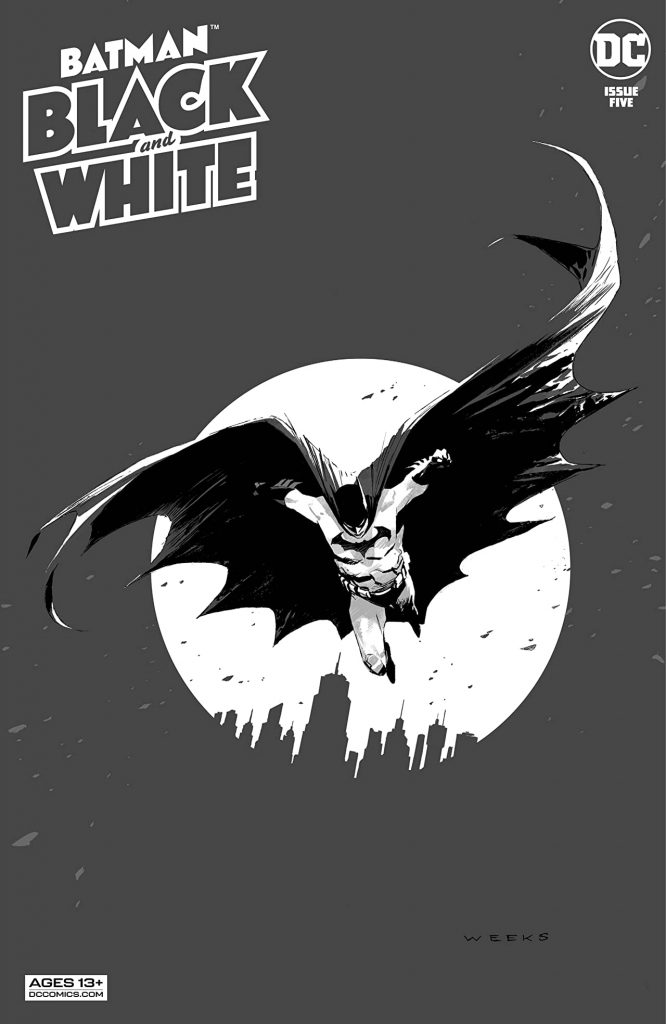 Jorge Jiminez draws and writes the first story in this issue, “A Father and Son Outing”! If you’re a fan of Morrison’s Batman, like me, you know his saying that “Victory is in the preparation” and Jiminez crafts a fun story showcasing just exactly what that means. Jiminez really nails all the thought that Bruce puts into what should be a run-of-the-mill bust and it highlights how experienced and honed he is as Batman by this point in his career. Jiminez depicts a Batman that is powerful and frightening as Bruce coaches his son. Despite all this, there’s just one thing Bruce didn’t factor in and it made for an amusing ending for this reader.

Following in Jiminez’s footsteps, Lee Weeks writes and draws “Signals”. The story focuses on Jim Gordon and an unresolved case leftover from the beginning of his career. The black and white coloring really brings out the noir aspects of this tale as Gordon tries to go on his own, without relying on his fellow officers or The Batman. Weeks’ art, as always, is detailed and gorgeous. In particular, I love how the specter of Batman emanates from an unlit Bat-Signal, his cape melting into the darkness that is his city. Eagle-eyed readers will notice tributes to past Bat creators at a train stop. Gordon’s emotions are palpable under Weeks’ pencil and I wish he could draw Batman every month.

Ever wonder what happened to Gilda Dent after The Long Halloween? Well, in “Blue” Detective Comics writer Mariko Tamaki and penciller Emanuela Luppachino conjure up an answer. Tamaki weaves in flashbacks to Gilda’s wedding and dissipating marriage to Harvey Dent with Electrocutioner’s bachelor party in the present day. For her part, Luppachino works in the old wedding rhyme of “Something borrowed, something blue” subtly into the art, as Gilda tries to make, in her mind at least, good luck for Electrocutioner’s fiancé. Luppachiono’s art brings elegance to the proceedings, even as things begin to spiral out of control. Tamaki emphasizes the discontentment that was always present in Gilda’s life, even when she didn’t realize it. A spirit of unfulfillment runs deep, until possibly the last page as Gilda takes matters into her own hands so others don’t suffer a similar fate.

Kieron Gillen and artist Jamie McKelvie bring the most fun and most discombobulating tale of the issue with their entry, “The Riddle”. The duo employs a “Choose-Your-Own-Adventure” style of storytelling that sees The Dark Knight give chase to The Riddler, with a plethora of surprises along the way, some (well, most) fatal. I really can’t say more about the story other than it captures the essence of the tv show’s death traps, presented with some immaculate line work that makes it easy to move from panel to panel, even when you have to jump forward two pages, then back one! Give it your best shot as the true riddle is how to get to the final panel!

Arguably, we save the best story for last. Jamal Campbell does double duty on “The Man Who Flies”. If you think this is a play on the iconic story “The Man Who Falls” written by Denny O’Neil, you’re correct as Campbell parallels that story’s rise of Bruce Wayne as Batman by showing us the ascent of Dick Grayson as first Robin, then Nightwing. Campbell takes us through a lushly illustrated visual history of Dick’s storied life as he descends through the canyons of Gotham, revealing all that has made him the man he is today-a man who soars. I found it incredibly moving and a visual feast. If you’re a Dick Grayson fan, this is the perfect love letter right now for a character that’s gone through a lot of recent trauma, dovetailing perfectly with what Tom Taylor is currently doing on Nightwing, so much so, that this could easily be seen as a prequel to his run.

Batman: Black & White has perhaps its strongest entry yet for this volume. Once again, several known artists get to stretch their wings creatively by also writing their own stories and rise to the creative challenge admirably. The ones done by writer/artist teams are no slouch either, giving us different ways to look at Batman and his supporting cast. For me, there is not a bad story amongst this bunch or one that I would even say is weak, as can be the case with these anthologies. So, take a trip back to Gotham, where criminals are a superstitious and cowardly lot and Batman always wins! – Javier E. Trujillo