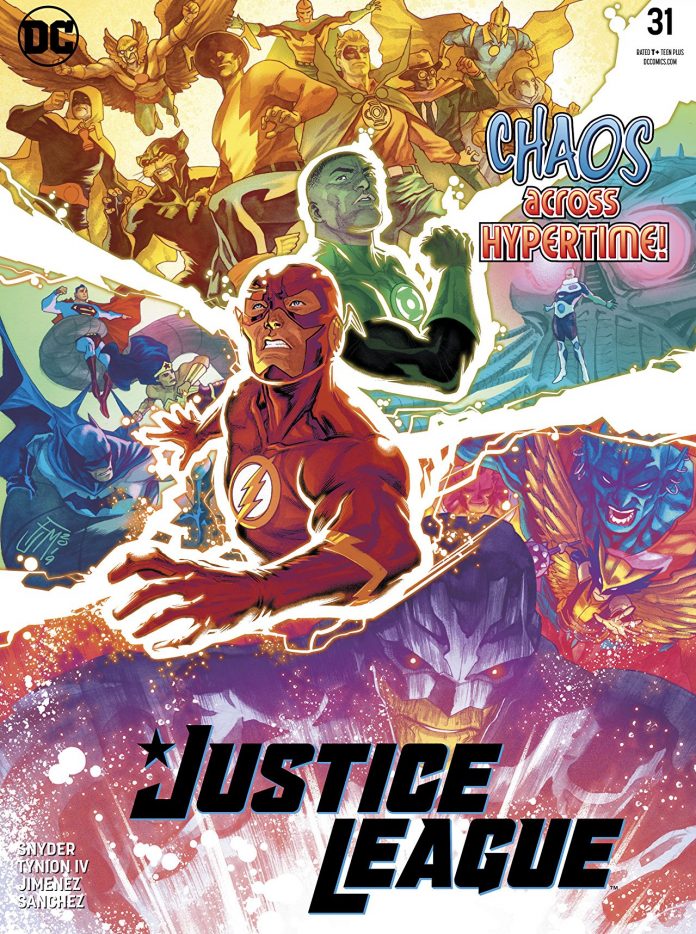 SYNOPSIS: “The Justice Doom War” part two! The culmination of Lex Luthor’s plan hinges on his beating the Justice League to the prize, ratcheting up the peril as the Year of the Villain continues! The Totality has shattered and its pieces have been tossed across space and time. Thus, the Justice League must also split apart, forming three search teams to comb the past, present, and future to re-combine the Totality before the Legion of Doom can get its villainous hands on the cosmic weapon. What allies will our heroes find in these other timelines? In the future, it’s the Last Boy on Earth, Kamandi! But in the past, there are the familiar faces of the Justice Society of America!

Justice Doom War Part 2 arrives just one week after Part 1 due to a bit of a change-up in DC’s release schedule. Last week, I raved about Justice League #30 based on the skillful writing of Scott Snyder and James Tynion IV, and masterful art by Jorge Jimenez, all of whom are back on board for issue #31. The results aren’t as strong however, which is a disappointment based on how well this chapter of the story was set up. It’s not bad, but the intrigue of half of the Justice League meeting the Justice Society in Earth’s past can’t totally balance out some clear strains on the plot and dialogue that does little more than service story mechanics.

Let me start with the less-than-great stuff.

I’ve been dying to see more of Perpetua for months and months, and now that she’s here the character is relegated to trading dialogue with Apex-Lex that doesn’t tell us anything new about the characters. We’ve heard about her goal of reshaping her multiverse into a weapon of Doom enough times that the opening page of the issue feels like a throwaway. It’s a retread for ongoing readers and is handled in a manner that is too uninteresting for new readers to latch on to. I want more from both Perpetua and the new incarnation of Lex, but this issue doesn’t deliver that.

The half of the League that has traveled into the future provides some fun with the classic Jack Kirby character Kamandi, the Last Boy on Earth. However, things get a bit muddy as the team transitions from searching the future for a shard of the totality into them shrinking into miniature form in order to hop from sections of Hypertime that Braniac has bottled in order to enact a search of his own. It may be that I missed something along the way, but this development seemed oddly formed as a plot concept and I found myself glazing over a bit and just “going with it.” Obviously these books require a suspension of reality, but the Snyder and Tynion seem to be leaning a bit too far in the belief that the readers will just go along for the ride and never provide a narrative imperative for this choice. What exactly is “hypertime” and how is Braniac able to bottle it within his ship that exists on the same plane of reality with the main storyline? Maybe it doesn’t matter, but the execution felt odd and clunky, pulling me out of the story to ask “why?”

I mentioned it before, but Flash and Green Lantern’s meeting up with the Justice Society in the past was the highlight of the book. It’s fun to watch these characters size each other up while trying to solve the mystery of why they are unaware of each other’s existence while sharing some major similarities and mutual acquaintances. There’s a really intriguing twist toward the end of the book that shows the Legion of Doom playing an influential and potentially reality-altering role in a major moment in history that I won’t spoil here. The character work is great, with Flash getting some light-hearted cracks in the conversation and John Stewart assuming the 40’s Green Lantern shares a similar background and origin.

I’ve written at length about the wonderful job Jimenez is doing on this run, so I won’t go into that yet again. Instead, I’ll focus a bit more on Alejandro Sanchez’s colorwork. The entire book is rich and powerful, with varying color schemes depending on which timeline is in focus. The earthy tones of the 1940’s contrast with the desolate palate of the devastated future, and the current timeline set largely in space is vibrant with bold blues, purples, and greens. It’s really lovely work.

Overall, it’s tough not to be a bit disappointed with this issue due to its wooden dialogue (Wonder Woman, Mera, and Superman are also victims) which is partially offset with some strong work on Mera, Shayne, and the cast of characters in the 1940’s. The art is excellent as always and the colors burst off the page. A less-than-stellar Justice League issue is still a good read and you’ll likely enjoy the end result (and basically have to read every issue at this point anyway just to keep up!) – Garret Grev