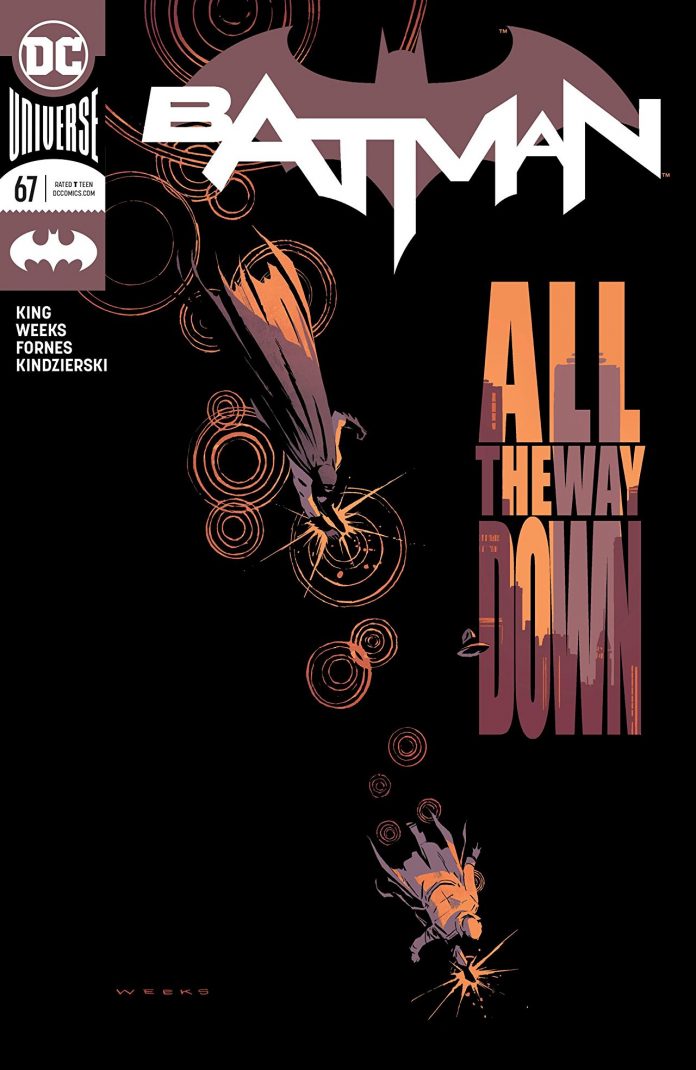 SYNOPSIS: The “Knightmares” continue as Batman chases a new foe in an impossible race. Over rooftops, across alleyways, up and down the streets of Gotham City, this lightning-fast crook outsmarts the Dark Knight at every turn. Is that because the man under the mask is someone more familiar than he knows? Artist Lee Weeks returns to BATMAN for an all-out action issue unlike any you’ve seen before.

The fifth installment of Batman’s “Knightmares” arrives today from writer Tom King and artists Lee Weeks and Jorge Fornés, and figuring out how to write about this one has been MY nightmare since I read it three days ago. But Batman teaches us never to give up, so, here goes.

The black facade of a Gotham City skyscraper, punctuated only by a few lit windows, towers ominously against the dirty blue clouds of big-city dusk. At the center of its roof stands the Batman, cape-shaped dramatically by the wind into an accusatory finger of black leather pointed at a man standing on the precipice with his back to the ledge, his face obscured by the high collar of a trench coat, a fedora pulled low, and a dark mask that looks like something from one of Dr. Jonathan Crane’s notebooks of discarded Scarecrow designs. (This one would be the “Stealth Scarecrow,” I think.)

Between them lies a corpse that looks…not quite right.

“Maybe it doesn’t look quite right because it’s a small panel.”

Look at how deliberately Batman and the ledge-stander are posed. We don’t need to be The World’s Greatest Detectives to know that this poor dead soul’s depiction, therefore, is every bit as deliberate.

And then the issue goes where its title declares: “All the Way Down.”

Crashing into windows, bounding through bedrooms.

And every time Batman snags or snares his prey, the prey finds a new way to keep going down, down, down, flitting down fire escapes, bounding over banisters, soaring down stairwells.

In one of my favorite moments in the chase, Batman uses math (just as he did when he smashed onto Scarecrow’s van in the parking garage in THE DARK KNIGHT) to calculate how, when, and where to slam into the escape artist.

All the way down.

Did I mention the ubiquitous beeps?

I won’t say if you find out the masked man’s identity; since this is a “Knightmare,” it doesn’t matter one way or the other, because this story isn’t really happening anyway — at least in a time or a place or a way that we can comprehend.

(I will say that I loved the ending, which turns eerie and dreamy before stopping abruptly. Beep, beep!)

The real questions are who has taken Batman, where are they keeping him, what are they doing to him, why is he experiencing all these crazy things, and are these mashed potatoes even here? (Sorry, X-FILES reference…I found it fitting.)

One thing I do know is how great this book looks. Weeks and Fornés propel this issue’s unstoppable momentum with impressive poses that make us feel the elation of every leap, the stomach-curdling of every plunge, and the pain of every impact. There’s a lived-in realism to the artwork that adds even more urgency, because nothing feels exaggerated. This chase is serious business, and the artists deliver maximum movement and detail in every panel. You’ll love, love, love following the action in this one, with Lovern Kindzierski’s colors providing a handsome variety of warm and cool hues that make every part of the pursuit unique.

I feel as if I should be clever and grade this one a “BEEP +,” but, as it always is with Tom King, this one’s another “A” all the way…regardless of how aggressively it doesn’t make sense.

Days later, I still can’t shake this one, and I hope you love it, too. – John Bierly