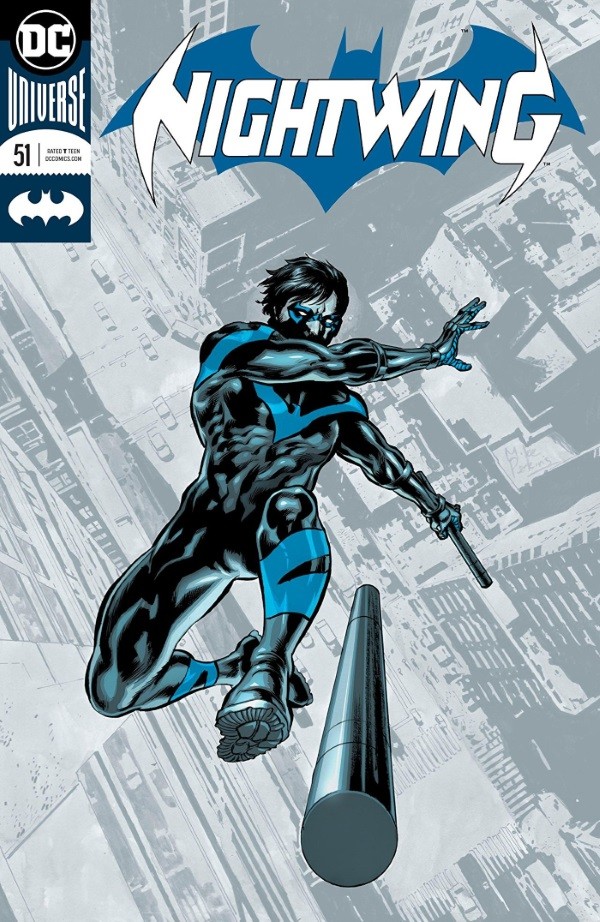 SYNOPSIS: And while Nightwing struggles to uncover the truth behind the “fear germ” that is killing people in their sleep, he must also try to overcome his own sudden struggles with heights and vertigo. He has lost his primary skill set as a hero and will have to focus on his brilliance as a detective instead. And a distracting love triangle certainly isn’t helping him focus…This new storyline spins out of events in BATMAN #55. Don’t miss the start of a new direction in Nightwing’s crimefighting career!

All in all, this was a swell follow-up to the major events of Nightwing #50. I’m glad Dick Grayson is incrementally getting snippets of the person he was while trying to repress what he sees.

This allows for more heart-to-heart moments with members of the Bat-Family and a sense of uneasiness as we are still unsure what Scarecrow’s plan will be. The panel where the Scarecrow’s true form is shown as he poses as a psychiatrist counseling one of his victims is an especially creepy highlight to this issue.

Then out of left field, we have a wildcard with a new, potentially violent Nightwing preparing to debut in the ashes of Grayson’s exit…

Grayson, today going by “Ric,” is having nightmares about his days as a crime fighter. An uplifting dream of Nightwing alongside Batgirl and Robin quickly goes south as their faces become warped images eerily similar to the Spyral scramble effect from Grayson’s secret agent days.

Ric awakens in the Prodigal Bar (prodigal son foreshadowing guys?) in time for Alfred to check-up on him and as gentlemanly as possible pay an outstanding bar tab.

I was particularly fond of Ric and Alfred’s conversation about forging your own destiny as it seemed to be alluding to Scott Snyder’s run on Batman when we got more background on how Alfred became employed with the Wayne’s. Plus, as a former British Intelligence officer, I have to wonder if Alfred is skillfully choosing his words to gradually undue Ric’s apathy toward his lost memories.

It would be splendid to see Superman/Clark Kent, Shawn Tsang or Damien Wayne have a similar heart-to-heart conversation with Grayson.

This issue also contributes to the great tradition of Bat-vehicles cameos.

We’ve seen the 1966 Batmobile, the Tumbler and the Batpod all appear in the background before. I was very happy that Alfred’s 1953 Rolls-Royce silver wraith, exactly like the one featured in BATMAN and BATMAN RETURNS got an extended cameo in this issue as Ric admirably gives the vehicle a mechanical run-down.

By the way, that moment reminded me of the garage scene in BATMAN FOREVER where Bruce Wayne and Dick bonded over repairing a Vincent Black Knight motorcycle. I may be in the minority, but the Batman and Robin elements of BATMAN FOREVER are supremely underrated.

While the loss of Dick Grayson has been told well in personal terms, my major beef with this issue is how standard Nightwing’s absence is felt in Bludhaven. Crime is up, the police are stretched thin, etc. etc. To me, it read like the same plot element that was used in SPIDER-MAN 2 when Spidey quit or when Oliver Queen got sidelined in season three of ARROW.