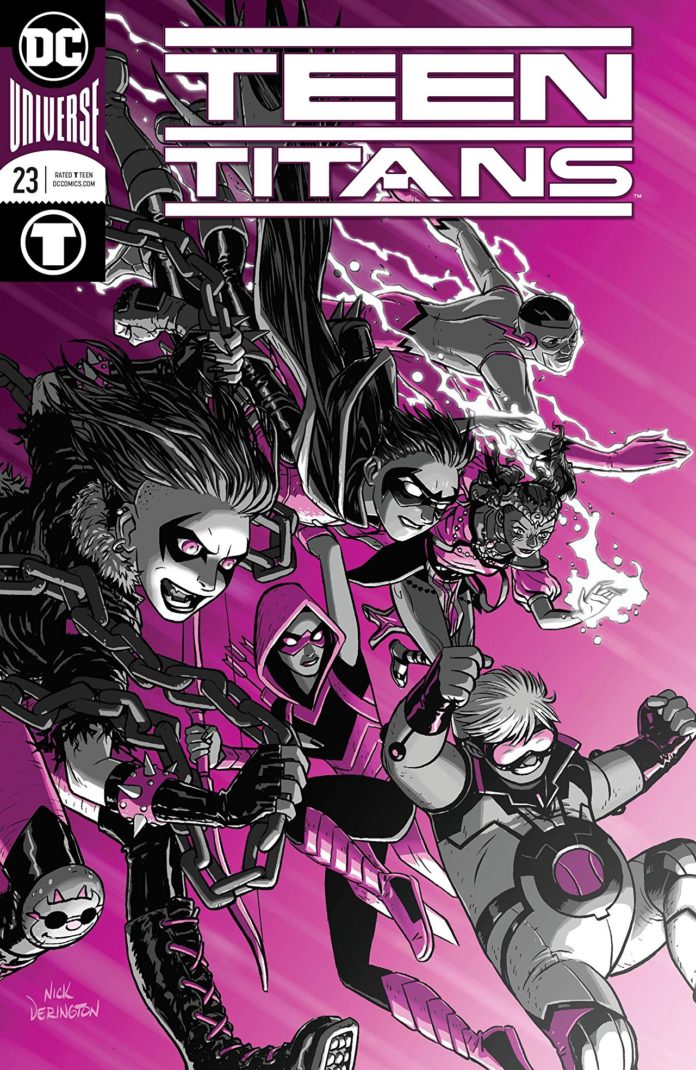 SYNOPSIS: The Teen Titans head to Gotham City, where they must thwart a plot to assassinate Commissioner Gordon! So who is the mysterious figure giving Robin his intel, and how does he know so much? Speaking of Robin, is he developing real feelings for the magical Djinn, or is he falling under the spell of her mystical ring? Meanwhile, more secrets come to light and more drama unfolds, putting Kid Flash and Red Arrow at odds!

I loved all the characters, I wanted to see more of them, I thought the writers and director involved were smart when it came to out-there humor, and who doesn’t like Will Ferrell?

The problem was it was just a bad movie that seemed to be trying to hard to give the audience what it though they wanted instead of just being good. It was not good.

That is where I’m at with this run of Teen Titans.

Issue #23 opens with two segments that follow up directly from events the reader saw in issue #22. The first covers an assassination attempt on Commissioner Gordon and the second continues on the “shocking” revelation that new Teen Titan Roundhouse did not die as was meant to be believed in issue #21.

The Teen Titans reunite with Roundhouse following the Gordon’s attempted assassination (Djinn pulling double duty as the fake-Gordon and also keeping him out of harm’s way with a sleep spell) and from there they are on the tail of the would-be commissioner killer. The reader is treated to a bit more of the blooming Djinn/Robin romance, and its impact on Robin as a leader and team member, Crush again acting with brute strength, and one pretty humorous look into the messed up parent/child relationships on the team. The issue closes with an unexpected end for Lady Vic (the previously mentioned assassin, who apparently doesn’t like kids) and an ominous message from The Other.

The biggest problem this book has going for it is that writer Adam Glass has not shown the ability to create meaningful stakes or emotionally impactful moments. More than that, it’s that Glass often relies too heavily on in moments that want to be those things and simply fall flat. We get characters that are (unconvincingly) killed off before the reader is invested in them. We get friction between team members that the reader doesn’t yet care about functioning as a team. We get characters coming back from the dead before there had been time for any mourning. We get a moment that involves the murder of an all-time iconic character that wants to be shocking but is so transparent to that it just doesn’t matter.

More disappointing, is that Glass is underutilizing what appears to be his strong suit; he can really pull off some nice character building, quieter moments. Maybe it’s an unfair thing to want more of in a comic about brash teenage superheroes, but the fact that when he delivers them they are quite good, and that he wants to shock and awe the audience with certain story points, we need more of them to care enough to make the book work.

Bernard Chang continues strongly enough as the book’s artist. Chang is at his best framing action shots and big pages. The fake-assassination of Gordon page is beautiful and the composition of the frame is geometric but explosive. Some of the other work here doesn’t fare as well as in previous issues. Proportions and body types seem to vary between some of the characters and their surroundings, and there are a couple of shots where structure and positions of characters’ bodies seem a bit sloppy and unnatural.

This book needs to figure out what it does well and stick to it a bit more. Glass could build these characters into people the reader really cares about individually and as a team. To do that he needs to slow the pace of the story down a bit until the reader has had a chance to be pulled deeper into their relationships and identities. There will be time to get into the fast pace and crazy action from there on. Unfortunately, this isn’t a great match with Chang style, as he really shines in energetic, fast-paced panels and big pretty splash pages.

I hope this creative team gets things figured out for issue #24.

And I hope if they ever make Anchor Man 3 it is not terrible. – Garret Grev