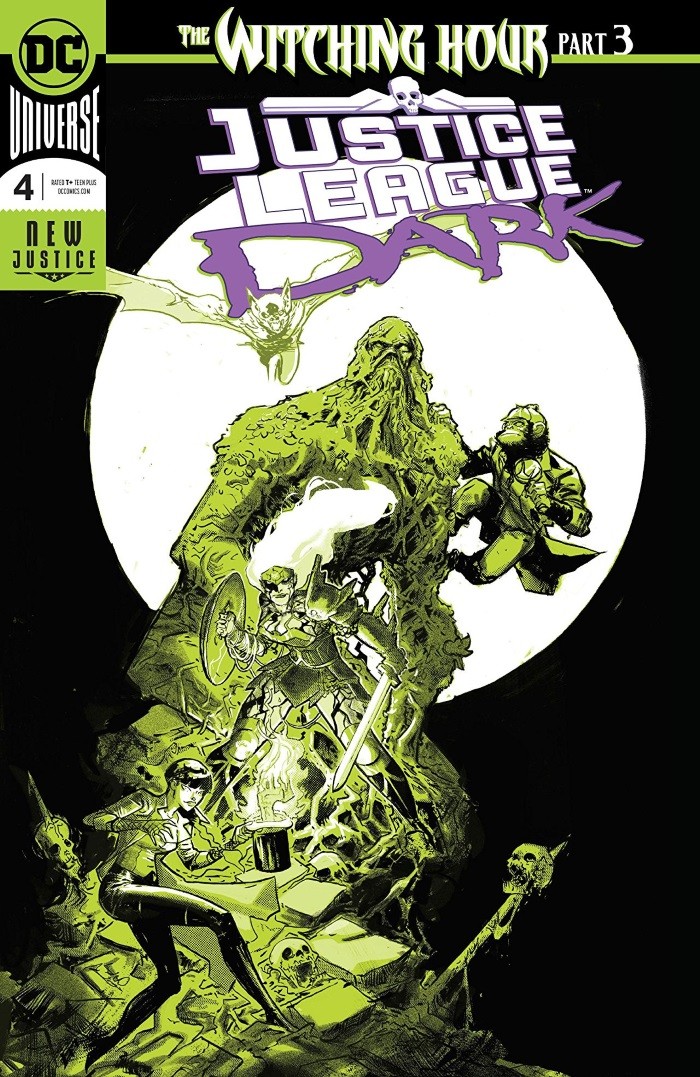 SYNOPSIS: “The Witching Hour” part three! Everything the Justice League Dark thought they knew about Wonder Woman and Hecate has proven to be wrong…and the Parliament of Trees is about to pay the price! Hecate knows this world isn’t strong enough to resist the Otherkind, so she’s going to burn it down and replace it with a world of her own…starting with that ancient grove!

Fresh off the heels of Wonder Woman #56, Diana, with the help of Circe, learns to wield the power of the Witchmark and opens a portal to Nanda Parbat in order to stop a possessed Manitou Dawn from burning the city to the ground.  Wonder Woman brings the rest of the Justice League Dark along with her, and an epic battle ensues.

Let me open on a positive note.

In the last couple of issues, Tynion’s words have been paired with different artists and colorists.  And while those artists have been serviceable, having penciller Alvaro Martínez Bueno and colorist Brad Anderson back for Justice League Dark #4 feels like coming home.  This issue is ABSOLUTELY GORGEOUS.  This is the strongest artwork in this series so far, and it is the main reason I would recommend picking this issue up if you’ve been enjoying this run.

Regrettably, the writing (still) is not the reason I would recommend picking this up.

I spoke about this in the last review, and I’ll say it again.  Tynion is strangling his story with exposition.  The imagery in this issue is so powerful and beautiful, and yet Tynion consistently draws our attention away to concentrate on his little gray boxes of narration, spoon-feeding the story to his readers, robbing them of the ability to use their imagination and sense of wonder to fill in the gaps.

At one point, Swamp Thing feels a disturbance in the Green, and Tynion writes:

“He could feel tulips wilting to black mush in the Dutch lowlands.  The mighty redwoods of California shed their needles in a dying gasp.”

Can you hear the slapping sound as my palm collides with my forehead?  This sentence has NO PLACE in a comic.  If you can’t trust the artist to show this to us, you need to stop writing for a moment and remember the medium you’re dealing with.  And the page on which this inane babble is placed is covered with one of the most beautiful illustrations in this issue.  So many times throughout this series, I’ve wanted to pull the pen out of Tynion’s hand, or shove his keyboard onto the floor and yell, “STOP!  Please, just STOP.  You’re killing your story with this incessant handholding!”

On top of this, the villain’s motivation continues to be problematic.  Hecate wants to end Magic because “humankind sits at a precipice of destruction,” and “Magic has become a liability,” and her end game is to “replace it (Magic) with something better.”  But she has yet to elaborate on what that “something” is (and I’m beginning to suspect that Tynion doesn’t know).  Hecate spends most of her time attempting to murder Rama Kushna because Hecate says that she’s done “poor work,” but what does that even mean?  Hecate doesn’t let us know.  The entire confrontation, as epic as it is, is rendered emotionally and logically empty if we don’t understand why the villain is choosing to attack.

“I don’t know. I’m of two minds – split nearly down the middle – on this issue. One the one hand, the artistry is simply magnificent, and on the other, the writing is atrocious. The grade I’m leaving below is based almost entirely on the artwork of Bueno and Anderson, but I must grade the issue as a whole. I desperately want the writing to be on par with the art – we’d we looking at A+ issues.

BOF Vlog #65: THE BATMAN-verse is Coming!