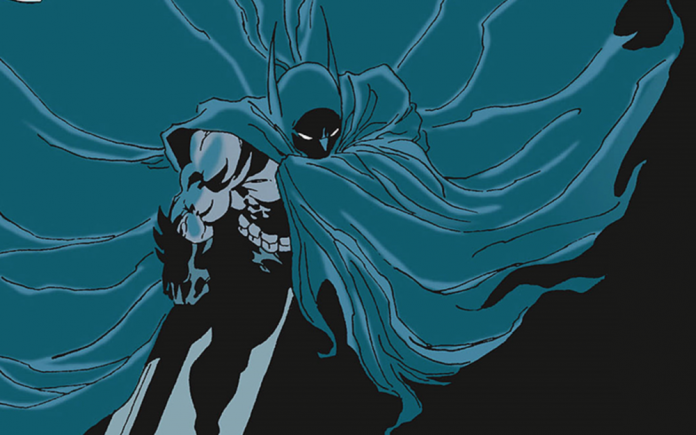 EDITOR’S NOTE: It is with great sadness that I have to report here on BOF that artist Tim Sale passed away at the age of 66.  Here is an interview I did with him back in 2007 and was published on the site on March 1st of that year. – Bill “Jett” Ramey

It’s with a heavy sadness that I must announce that Tim Sale passed away today. He passed with the love of his life beside him, and loves all of you very much. Please share photos and stories under this post, as we hope to share them with the community.

JETT: So, what are you currently working on and/or have coming up?

TS: My current comics project is SUPERMAN CONFIDENTIAL, with Darwyn Cooke writing and Dave Stewart coloring. That’s a six-issue story arc, and after that is unknown what I’ll do, but I am still exclusive to DC and in the contract, I still owe them about another 100 pages after SC is done, so I’m sure we’ll find something!

JETT: What first crosses your mind when you think about THE LONG HALLOWEEN?

TS: That it was a long time ago! I’m very proud of the work, and I think over the course of the series I really learned a great deal, and Jeph and I really learned how to work together. TLH and SUPERMAN FOR ALL SEASONS were the real coming-out party for Jeph and me as artists and friends and collaborators.

JETT: You know many Batman fans consider TLH one of the greatest Batman stories ever produced. What’s your take on that?

TS: Thanks! As I say, it meant a great deal to me at the time to do the work, to truly be a storytelling partner with Jeph, and it’s extremely gratifying that it was so well received. The mystery story format is perfect for Batman, and I personally love the genre, so that made it all the more fun. Film Noir, too. As Steranko once told me, “Where would we be without Venetian blinds?”

JETT: How much creative freedom did you have when working with Jeph Loeb on TLH and DARK VICTORY? Did the two of you discuss every little detail or did you have a completely free hand?

TS: By the time we got to TLH, Jeph and I had a lot of work together behind us, and had finally settled on a technique that worked best for us. Jeph had learned what I do well and don’t do well — or don’t like to do — and he has a great ability to write to that. By the time of TLH, Jeph was writing pretty much full scripts for me, in that there are page and panel breakdowns, with descriptions and much of the dialogue. In his mind, he is very much writing for me and so there are things he can rely on me to provide that he doesn’t have to mention, and references he can make to old movies or comics that he knows I will get. We will discuss the kind of story that we want to tell in the beginning, but from then on it’s Jeph writing and I’m kibitzing and editing slightly. As far as the art, I have free reign to cut or add panels and shift emphasis if I think it serves the story, but there is very little of that really.

JETT: Would you like to collaborate with Jeph on Batman again? Perhaps a sequel to DARK VICTORY?

TS: Sure, anytime. As far as a sequel, never say never, but I doubt it, and besides, we kinda think of CATWOMAN: WHEN IN ROME as our third in the trilogy. 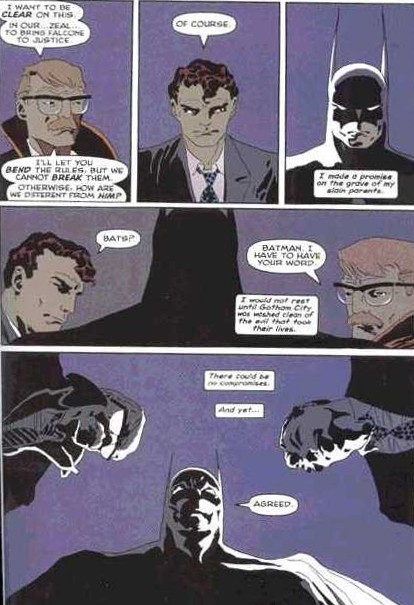 JETT: When you watched BATMAN BEGINS, did you see any of TLH in it?

TS: You know, I didn’t. Others did, and I know that both Christian Bale and Christopher Nolan mentioned TLH as an influence, but I didn’t really see it. Maybe I’m too close to it.

JETT: Rumor has it that TLH will have a BIG influence on the new Batman film, THE DARK KNIGHT. What aspects of your book would you like to see included in the film?

TS: I suppose I’d love to see the transformation of the crime-fighting trio of Batman, Gordon, and Dent into the Two-Face story, and how Gotham City is changed from being run by hoods to being run by the “freaks”, the supervillians. A mystery story would be nice, too, a real plot. But movies are a very different thing than comics and I’m not one to desire “faithfulness” in the details, I just want a good story, well told.

JETT: Are you excited about the upcoming release of ABSOLUTE BATMAN: THE LONG HALLOWEEN? Did you do anything new for it?

TS: Yes, very much. It’s been ten years, and I can’t wait to see it all big and shiny! I worked with DC designer Louis Prandi on the look of the volume, and Bob Harris and Robbin Brosterman oversaw it all and made sure things worked. DC was very inclusive of things Jeph and I wanted to do. There is a new cover and four new story pages that were penciled for the original comics but had to be cut for length, so I inked them up (ten years between pencils and inks!), and Dave Stewart colored them in his best Greg Wright imitation. There is a cover section with sketches and Jeph’s original story proposal in there too. David Goyer and Christopher Nolan provide the intro, how cool is that?

JETT: What work are you most proud of?

TS: I love both the Batman and Superman works I’ve done with Jeph, but maybe my favorite is the short story Jeph and I did in SUPERMAN/BATMAN #26, called “Sam’s Story”. Inspired by the awful, awful untimely death of Jeph’s teenage son Sam, it’s a very moving story of how Clark first experiences mortality when a classmate of his gets cancer. Makes me tear up just thinking about it, and I did my best to honor Sam and what happened. I think it may be the best thing that Jeph and I ever did together.

JETT: That’s awesome Tim, really. Is there a character/comic that you haven’t worked on and would love to?

TS: I don’t really have a strong wish list of characters, I’m more interested in the story and motivation, what’s the reason to tell this story? There are lots of characters that I think might fit that bill, but I’m nowhere near as good at thinking about how a character fits a storyline as many writers are.

JETT: Warner Bros. has commissioned a Justice League [JUSTICE LEAGUE: MORTAL] script for a live-action. Would you like to see one and if so, should Batman be included?

TS: For me personally, hey, I don’t even like Batman with Robin, much less a group of other costumed geeks. I like him best as a tortured, driven, solitary figure.

JETT: Any chance that you’ll be heading back to “Gotham” soon?

TS: No plans, but who knows? There are those 100 pages that DC will need from me!