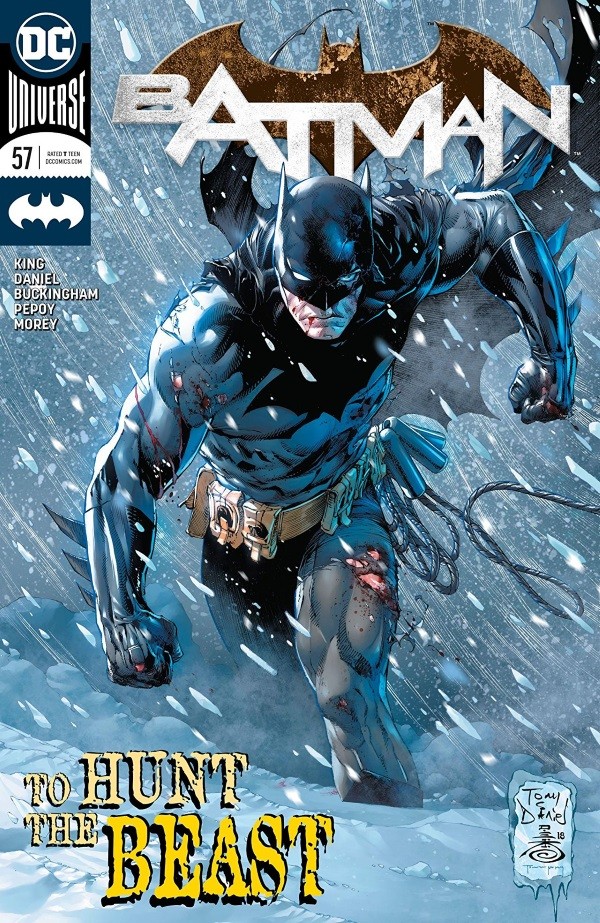 SYNOPSIS: The KGBeast isn’t working alone. As the Cold War between Batman and the Russian killer heats up, Batman’s nose for mystery gets to twitching when he suspects there’s more to the KGBeast’s attacks than initially thought. Not only does this tie back to the court case Bruce Wayne sat on involving Mr. Freeze, there’s another villainous Gotham ghoul in play—but whom?

Tom King’s “Beasts of Burden” concludes with a blistering symphony of Bat-payback that’s more savage and suffocating than even the most blustery of blizzards. Because what makes The Batman’s actions here even colder than the snow-smothered Russian landscape through which he trudges — to exact vengeance upon KGBeast for the bullet he placed across Dick Grayson’s brain — is that maybe it’s not even answers that our heroes after all.

Once Batman arrives at the little wooden shack KGBeast has holed himself up in (on the heels of some familial nastiness that happened there in the last issue), the battle happens fast. It’s brutal. It’s cruel. And it’s book-ended and interwoven with “The Animals and the Pit,” a bleak and bloody Russian folk-tale by Alexander Nikolaevich Afanasyev. As the story’s Pig, Wolf, Fox, Hare, and Squirrel conspire to survive each other’s intrigues and appetites, Batman and KGBeast unleash all of their training and every bit of their rage at each other in one of the nastiest showdowns we’ve ever seen in these pages.

Tony Daniel pencils and inks the Batman/KGBeast portions with a violence that’s visceral and dynamic. You’ll feel the crunch of every punch, the bite of every boot, and the anger behind every blow. The folk-tale pages, meanwhile, are provided by Mark Buckingham and Andrew Pepoy of FABLES fame in an absolutely brilliant move by DC Comics. The animals quickly change from innocent to sinister, with the artists switching seasons as effortlessly as they manage motivations; Buckingham and Pepoy lean hard into the story’s inherent ugliness with remarkable glee without ever losing that classic feel. Clayton Cowles letters the folk-tale pages with thicker, more childlike characters than the knife-precise words of the main story, while colorist Tomeu Morey’s palette is, as always, appropriate to every panel.

King ends it with a coincidence that annoyed me quite a bit, but it’s a character coincidence rather than a plot coincidence, so it’s ultimately harmless.

What’s not harmless is the way in which Batman goes after the man who shot his original son and soldier, and the finale of that fight is not afraid to shock and satisfy simultaneously. Don’t miss this one. – John Bierly