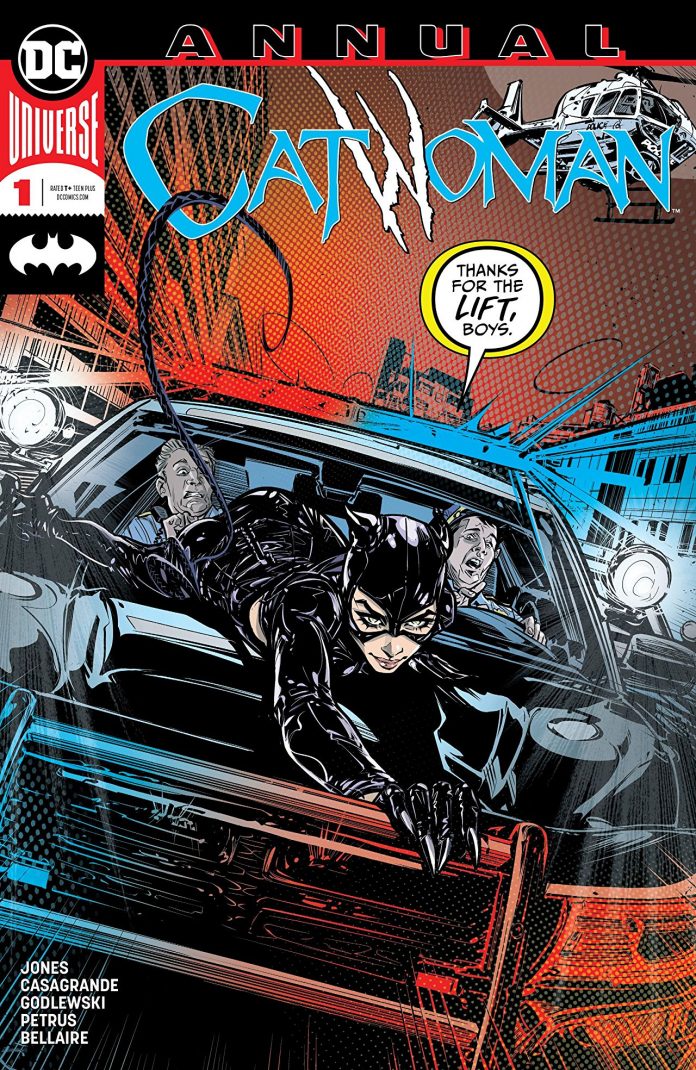 SYNOPSIS: Selina Kyle walks a fine line in the criminal underworld. A thief herself, she’s regularly on the wrong side of the law, while her personal life gives her crooked colleagues plenty of reason to distrust her. When Catwoman finds herself at the center of a dark plot full of violence and intrigue, she’ll have to decide which side she is on…and who she can trust. If a leopard can’t change its spots, and a leopard is a cat…can Catwoman ever escape her own destiny?

Out of the goodness of her cat heart, Selina takes in a struggling woman, a stray if you will, and helps get her rehabilitated and on her feet.  This stray, over time, surrounds herself with other strays who need a helping hand, and Selina finds that she now has a team of women who she is able to educate on the finer points of confidence schemes and high-end thievery.

Though not given a direct order, Selina’s team sets out on their own one night to steal a valuable spear from what appears to be an abandoned mansion.  Six leave to complete the job, but three are found dead the next day, apparently due to suicide.  When the authorities arrive, they find Catwoman standing over the bodies, but there is more going on than meets the eye!  With the Villa Hermosa PD on her tail, Selina must discover the true nature of these deaths before the next body found is her own…

Catwoman Annual #1 takes a brief respite from the ongoing storyline to tell a short story of Selina’s life and goings-on in Villa Hermosa.  It’s an interesting story that reads quickly and easily, but it isn’t exactly stellar.

One of the strengths writer Joëlle Jones has is a firm grasp of who Catwoman is – she’s not exactly a bad guy, she’s not exactly a good guy – she walks that line nearly perfectly and that’s what makes her such a compelling character.  She’s compassionate and caring while being unyielding and no-nonsense.  Jones amplifies these great qualities that Selina has in this issue, but unfortunately, we don’t get to see these other women “strays” as well-drawn as Selina (most of them are essentially placeholders).  So when a few of them show up dead, we can mourn the loss of a life, but we can’t really mourn the loss of someone we’ve known, so it’s difficult to feel the weight of the tragedy.  And the villain behind it all, if the reader doesn’t have previous understanding of his history, may be confused or disinterested in the outcome of this story.

The artwork for this annual, shared amongst three artists, remains consistent and quite good throughout – I didn’t notice when a shift was made from one illustrator to the next.  Characters are drawn well, and colors pop nicely.  Jones’ use of the recorded testimonial point of view and social media within the narrative help keep the look and structure of the story from becoming visually stale.  No complaints in the art department.

If you’ve been enjoying what Jones has been doing with Catwoman so far, you may want to think about picking up this annual, but I’m right there on the fence with it – it wasn’t bad by any means, but it wasn’t great.  Though the journey itself is interesting enough, the ending isn’t all that satisfying. – John Funderburg