SYNOPSIS: After the devastating events of Avengers: Infinity War (2018), the universe is in ruins due to the efforts of the Mad Titan, Thanos. With the help of remaining allies, the Avengers must assemble once more in order to undo Thanos’ actions and restore order to the universe once and for all, no matter what consequences may be in store. 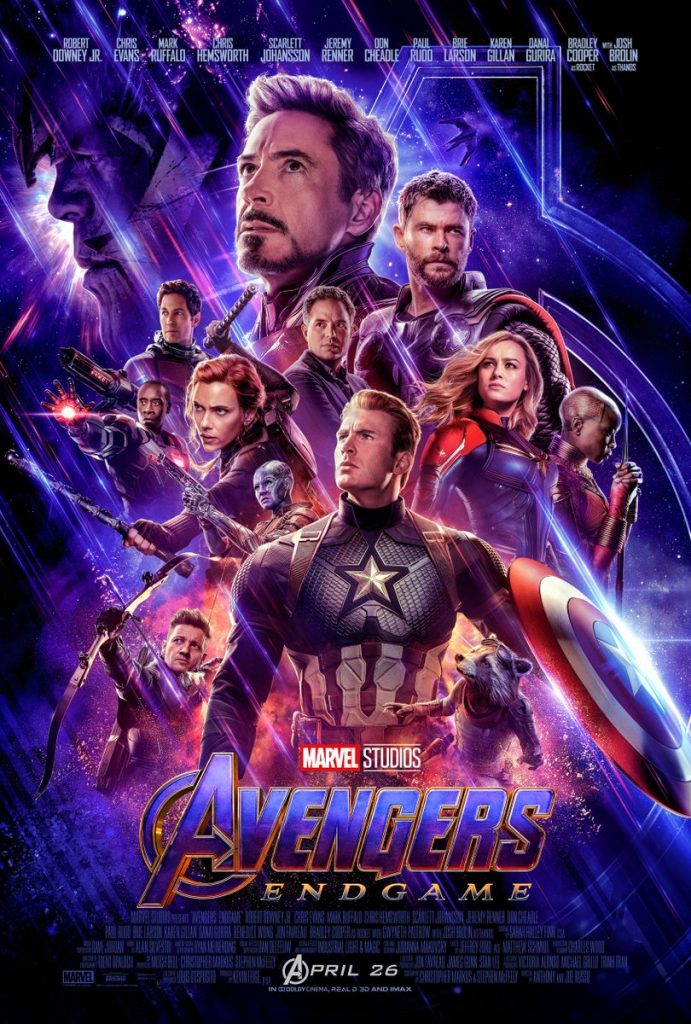 They are almost all in it.

Avengers: Endgame includes such a dizzying list of characters from every previous film that it’s close to being overwhelming.

That could partially explain the film’s 3 hour running time, but I think at least 30 minutes of it could have been cut without compromising the storyline.

Like a roller coaster, it begins with a slow pace and builds up to that first hill, not usually a very big one. Progressively, the hills get bigger and bigger and the speed increases exponentially until you are gasping for breath. You experience fear and exhilaration, and sometimes you just want the ride to be over.

I really liked this film, but I warn you – the gamut of emotions you’ll feel will be extraordinary.

It’s now 5 years since Thanos (Josh Brolin) turned half of all living creatures on Earth to dust using the Infinity Gauntlet powered by the Infinity Stones. Those who are left live in a constant state of melancholy. Some give into it while others try to find a way to undo it.

Natasha Romonoff (Scarlett Johansson) works practically around the clock because she believes the disappeared still exist. As she explains to Steve Rogers (Chris Evans), “Even if there’s a small chance, we owe it to everybody who’s not in this room.” Bruce Banner/Hulk (Mark Ruffalo), who’s changed in quite a surprising way, also takes an active role in the efforts. It’s not until Scott Lang (Paul Rudd) manages to escape from the quantum realm – where he ended up in the previous Antman film – that they come to an astonishing conclusion: time travel may be possible in the quantum realm.

Tony Stark (Robert Downey Jr.) has made the best of the situation by settling down with Pepper Potts (Gwyneth Paltrow) in an idyllic, country house, and has a really good life for himself and his family.  Stark has become averse to risk-taking, so he has to consider carefully whether or not to help deal with the quantum realm. Of course, Tony hasn’t lost his penchant for cynical repartee,  a constant in all of the Ironman films, adding humor, which is actually abundant in the film.

The remaining Avengers seek out Thor (Chris Hemsworth) who has taken a less noble approach to his sorrow. Other than re-stating Rocket’s (voiced by Bradley Cooper) observation, “You look like melted ice cream!” I’ll let you discover his problematic state of being for yourself, though I was reminded of Mr. Hemsworth’s skill as a comic actor!

Clint Barton/Hawkeye (Jeremy Renner), whose entire family was “dusted” in Infinity War, has taken a more nihilistic and violent approach to grief.  When he’s told there might be a chance to reverse Thanos’s mad destruction, he reluctantly agrees to help.

So THIS is the set-up.

The remaining Avengers will try to manipulate time in the quantum realm to retrieve the Infinity Stones before Thanos ever has a chance to use them. That’s all I’m going to say about the plot because the less you know about it in advance, the better.

The real magic in the film is the artistry of the actors. Together, they create an emotional environment of suspense, despair turned into a tenuous hope, heroic resolve, and super-human struggles.

They are, after all, superheroes.

And, oh yes, there is humor, but there’s also corresponding tragedy.

Chris Hemsworth said in an interview that he cried 6 times when he viewed the completed film. That sounds about right. It’s a fine film, but you won’t leave it without being profoundly affected. – Jo Hyde

OPINION: The New DC on Film Multiverse Can Unite Fandom