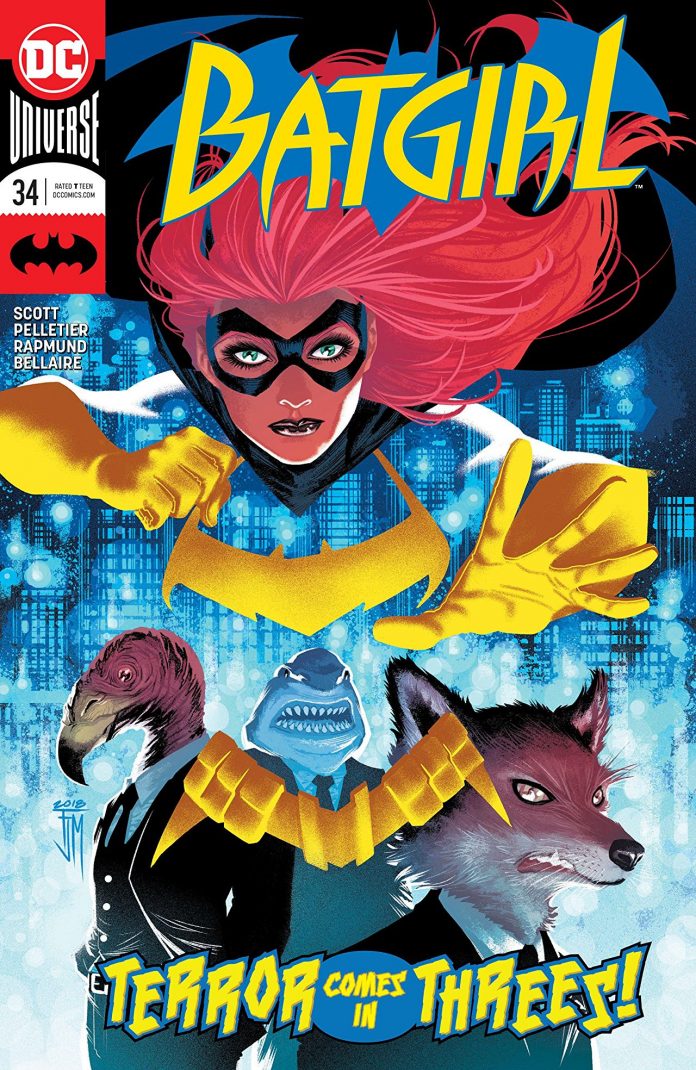 SYNOPSIS: When Barbara Gordon confronts her father about James Jr.’s return to Gotham City, the stress between them causes the two to finally break apart. As a result, Babs has to move into her own apartment…but her celebration is cut short when her check bounces! Batgirl returns to Burnside to find out if you really can go home again—spoiler alert: you can’t when the Terrible Trio has taken over!

Both covers for this issue, by Francis Manapul and Joshua Middleton, are DOPE. They’re very different in style from each other and either would grab my attention if I came across it while perusing the new comics racks.

This issue starts by introducing us to our new featured villains: the Terrible Trio. Paul Pelletier’s rendition of the Terrible Trio may be his most inspired character work on this series so far. He seems to be having fun with the different animal masks, body types and dapper suits. Fox, as presented here, bears a strong resemblance to Roald Dahl/Wes Anderson’s Fantastic Mr. Fox. The dialogue in this opening scene reveals the trio to be the ones who hired Cormorant to intimidate candidate Alejo, carrying forward the plot from recent issues.

Moving on, we catch up with Batgirl on her way to the campaign office. Whoa, she’s really just gonna slip in the window in-costume behind a room full of people? Playing a little fast and loose with that secret identity, eh Babs? Well, she sneaks by successfully and is in plain clothes at her desk before Jason Bard catches her for a little small talk. It’s mentioned in conversation that Babs just got a new apartment. Maybe this is me being picky, but it seems like it’s something we’re supposed to have already known about, yet this is the first mention.

Just as the office party is starting to get boring, someone finds a severed hand in a box! Always a surefire conversation starter. This brings in Commissioner James Gordon and things get heated between father and daughter, carrying over from a scene in the last issue. Barbara’s eyes look much more yellow in this scene than their usual green. I’m wondering if that’s unintentional, or did someone decide her eyes change color when she’s angry?

Batgirl retreats to her clock tower for some investigating, finding out some useful information about the victims and where she might find the perpetrators. She discovers a super-secret social event for elite Gotham scum… but is it a trap?

So after reading this one, I can say the last issue was mostly just an interlude between halves of this extended storyline. I’m interested to see where this Terrible Trio thing goes and how this political campaign plays out, but I also hope we come back around to James Jr. and see how Barbara handles his reemergence as a free man in Gotham. – Rob Veatch III