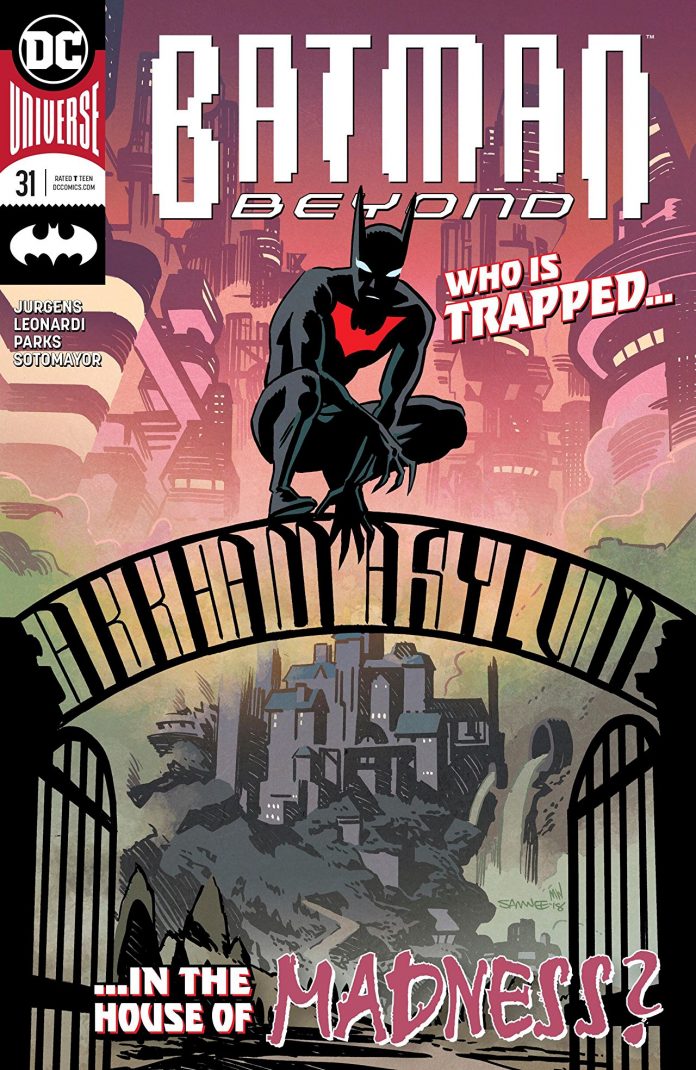 SYNOPSIS: With a series of spectacular high-tech heists, a mysterious new villain known as the Splitt is preying on Neo-Gotham. Only Batman is capable of stopping him, yet Terry McGinnis wants nothing more than to get his life back to normal after his destructive battle with The Joker. Making this even more difficult is the strange, enigmatic fate of Bruce Wayne!

After the conclusion of The Final Joke, the story of The Joker and Terry McGinnis has come to an end (or has it?).

Matt McGinnis is no longer Robin, much to his own chagrin and he’s struggling to adjust to not being by his brother’s side anymore.

This new arc begins with Bruce touring the restructured Arkham Asylum, which makes me think of Arkham Asylum: A Serious House on Serious Earth, with its emphasis on the semantics of “patient-friendly care” instead of the harsher sounding “inmate reform.” Meanwhile, more and more high-tech equipment is going missing by the day, typical fare for Neo-Gotham.

It’s a pretty basic story, for the most part, nothing groundbreaking, but nothing terrible either. Things start to pick up when the new villain is introduced. Splitt has a cool design (the suit is a little Deathstroke-esque, but it’s easy to overlook that) and his/her abilities are pretty novel. It’ll be interesting to see what direction this new villain is taken in.

Along with a brand new villain, we also get brand new artists for this arc. Wade Von Grawbadger, who is known for his work on Starman between 1994-1999, and Rick Leonardi, of Spider-Man 2099 fame, take over where Evan “Doc” Shaner left off.

I really like the art style in this issue. The first panel where Terry dons the Batsuit is incredibly badass and the age lines added to Bruce’s face add a bit more character to him.

There seems to be a decent foundation set here, and I’m really curious where Dan Jurgens is going to take us. – Matt Whaley