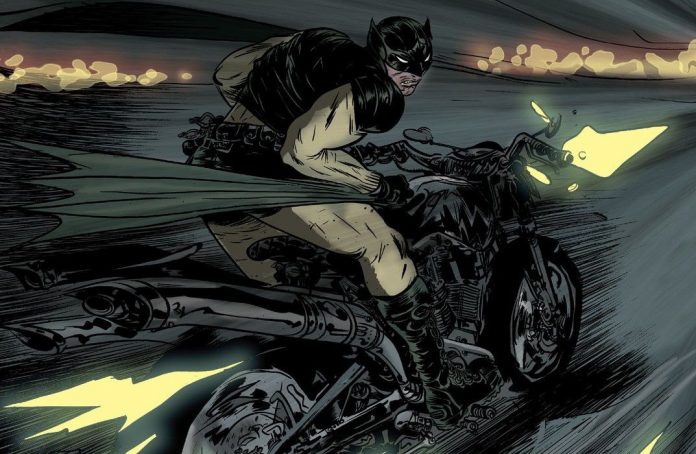 SYNOPSIS:  In Gotham City, 2039, a federal agent is murdered, leaving The Batman, a forgotten icon from the past, wanted for the murder.

A federal agent found dead… a gunshot Batman on the run…

Government corruption, mercenaries, holograms, false teeth, and a search for the truth…

Welcome to Batman: Year 100, a dark and gritty dystopian odyssey that offers a unique take on the Dark Knight that is unlike any other.

And it is absolutely bloody brilliant. 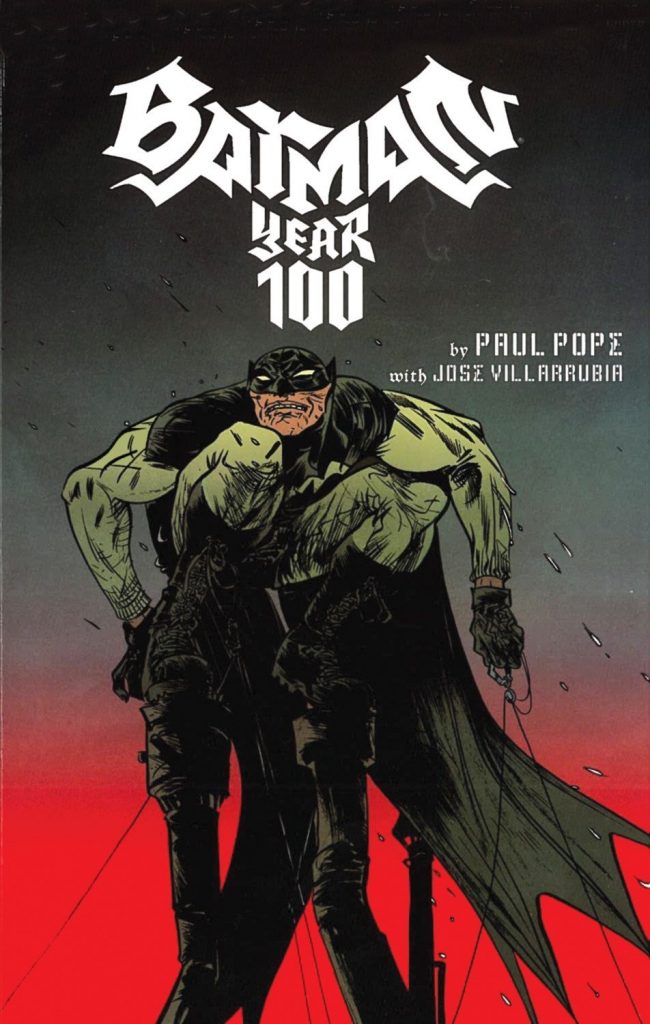 Let me just start out by saying that I don’t want to say too much about the story — it’s truly best to go in knowing as little as possible.  But I will say this: Batman: Year 100 is unapologetically a detective story first and foremost – Batman is caught up in a situation he does not fully understand, so he spends his time tracking down leads, pulling teeth from cadavers, and breaking into government buildings to pilfer blood samples.

I could say more, but if you’ve yet to read this book, I’ll let you discover most of its secrets on your own.

One thing I will expound upon that I think is fascinating about Year 100 (and then I’ll shut up) is that this story references multiple Batman timelines (and multiple “versions” of Batman) and claims them all as objective reality.  Essentially, Batman’s history throughout the years (in our reality) is actual canon in this storyline.  Writer Paul Pope does some sneaky maneuvering here in order to make this work.  It’s very similar to what Sean Murphy would also get away with in his book Batman: White Knight by using Jack Napier, multiple Harleys, and all those glorious Batmobiles from different eras and mediums.  Each of these separate, isolated pieces is pulled into one cohesive storyline.  You know in your head that all of these things shouldn’t exist simultaneously, and yet… they do.  And it WORKS.

Paul Pope is the brains behind the story (and the hand behind the artwork) for this incredible Batman adventure, and one of the best things he does is allow the narrative to unfold through the art.  He lets the story breathe this way, lets the panels speak for themselves, so it doesn’t feel rushed or text-heavy.  The beginning of this book opens with Batman being chased by dogs, and it is one of my favorite openings to any Batman book.  And none of the book’s opening is told through words.

But I think the most important thing that Pope does is get Batman right — while also showing us a version of the character that is quite different than any other previous iteration. 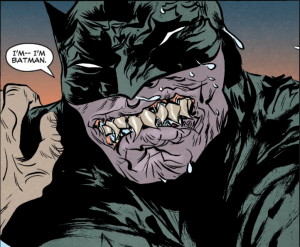 Batman is beastly in Year 100, overtly animalistic: an entity of mystery and deception. I’ve known Batman as a character for all of my life, but I was surprised at the amount of suspicion and fear that radiated off him in this book.  Tied into this off-kilter take is Batman’s use of tools, which is rather bewitching and ingenious.  Chains, clasps, and pulleys — a set of false, razor-sharp teeth — Batman uses each of these in wonderfully bizarre ways that lead to some pretty breathtaking encounters.  And speaking of tools, while there is no Batmobile in this story, there IS one of the sickest Batcycles in recent memory…

Which is a perfect segue to talk about design.

Pope’s art, colored pristinely by José Villarrubia, is what sets this book apart from all others, bar none. There is a franticness to the drawings — a bizarre energy that erupts from every page.  Each panel is buzzing with kinetic, frenetic pizzazz.  No other Batman book I’ve read looks or feels quite like Year 100.  I guess that’s why Pope won the Eisner Award in 2007 (“Best Writer/Artist”) for this book.  It also won the Eisner for “Best Limited Series” that year.

To wrap up: BUY THIS BOOK WHILE YOU CAN! Too many amazing Batman books have gone out of print.  Don’t let this one slip through your fingers, because you will regret it. – John Funderburg

Check out all of BOF’s Batman ELSEWORLDS reviews and retrospectives HERE!