SYNOPSIS: The stunning conclusion to “City of Bane” is here! How will Flashpoint Batman be vanquished from our dimension? What will become of Gotham Girl now that she’s betrayed all she knows? How will the Bat team cope without Alfred? Will Catwoman stick around? Who will rebuild Gotham City? Is Batman ever going to be Batman again? The event of the summer now closes out the year, setting the stage for a whole new path for the Dark Knight Detective. You don’t dare miss the extra-sized concluding chapter to Tom King’s epic run on Batman-and it all leads to the new Batman and Catwoman series! 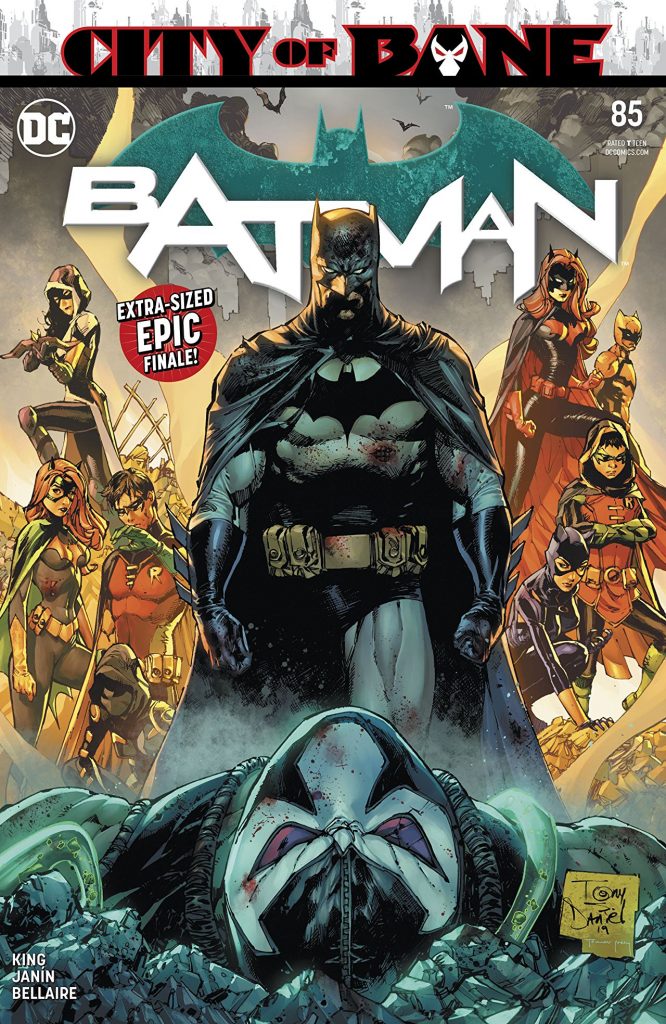 Tom King concludes “City of Bane” (and his tenure on this title) with today’s BATMAN #85.

I’ve loved this run, and I’m glad its ending’s energy will continue into King’s upcoming BATMAN/CATWOMAN series with artist Clay Mann (who drew some of King’s best BATMAN issues). The finale does several of the same things that have turned some readers away, but it also took some turns that soothed certain concerns I’ve had with the execution and pacing of the last several issues.

From the start, King has capably delivered big, innovative adventure with a lot of heart baked into every action beat. Those early stories were unstoppable: “I Am Gotham,” “I Am Suicide” and “I Am Bane,” and the phenomenal “The War of Jokes and Riddles,” which is one of my favorite Rogues Gallery tales of all time.

Romance was always a driving factor in these pages, too, and I don’t think any of King’s arcs did it better than “Rules of Engagement,” which pitted Batman and his new fiancée, Catwoman, against Talia al Ghul before comparing their love affair to the one shared by Clark Kent and Lois Lane in an investigation that turned into a date night. Issue #49 is, at once, one of the best Catwoman and best Joker stories ever told, and all of it culminated in the heavily hyped wedding that didn’t even happen in issue #50.

But King did the impossible in the intervening issues by making me not feel as if I’d been swindled by the fake-out on the nuptials. First in the issues with Bruce Wayne on a jury to clear an innocent Mr. Freeze for a crime that Batman had put him away for and again in a particularly great Penguin story, King proved he could give us interesting and original takes on something we’ve seen so many times before: a hurt and hurting Bruce Wayne in the aftermath of getting his heart stomped.

Several “Knightmares” issues, in which Bruce must free his body and mind from a crushing torrent of psychological torment, paired King’s fabulously crazy scenarios with a revolving team of artists for some of the most beautifully and brilliantly bonkers Batman tales I’ve ever seen. I also can’t recommended Annual #2 and especially Annual #4 enough. (Annual #4 is Alfred’s daily diary about Batman as he protects Gotham City, planet Earth, and even the universe against enemies foreign, domestic, monstrous, mythological, multi-dimensional, ancient, anachronistic, costumed, and cosmic, and it’s awesome.)

If “The War of Jokes and Riddles” is King’s “The Long Halloween,” “City of Bane” was, at least at its beginning, his unfettered take on THE DARK KNIGHT RISES with an unlimited budget. But as Bruce Wayne spent too many issues asleep on a couch before taking an admittedly awesome two-part detour to Hawaii (that did tie in to the main story) with Selina Kyle, even Bane took a backseat to Flashpoint Thomas Wayne. Thomas has exhibited some of the clearest and most interesting motivations of any character during King’s run, and I’ve really enjoyed everything King has done with him. But his very presence on our Bruce Wayne’s Earth often made the “when,” “where,” “how,” and “why” of the story feel confusing and convoluted. It didn’t bother me, because I loved the crazy.

I will always admire King for taking big and weird chances in these pages, and many of them pay off in today’s conclusion. Let’s first discuss what doesn’t happen: The cover shows Batman and the Bat Family defiantly staring down a defeated Bane, but Bane has been off the table since issue #82, and for the most part he remains so here. (But his one contribution to the ending of the story that bears his name is a big one.) DC’s solicit asks us now the Bat team will cope without Alfred, but Alfred is basically confined to a single panel here. That’s why I don’t think he’s really dead.

Bear with me on this one. As I’ve said before, Bane employed several shape-shifters and mind-benders. I can almost imagine a situation where Flashpoint Thomas approached Alfred and said, “Hey, I don’t want Bruce to be Batman, and you don’t want Bruce to be Batman, so what if we let everyone, including Bane, think that Bane killed you so that Bruce will possibly double-think his life choices and give up the cape to be happy with the lady. You’ll have to disappear, but at least you’ll know he’s free.” The big flaws here, of course, are that Alfred would never go along with it and that Flashpoint never met a cruel lesson he couldn’t resist, but I still feel as if we’re missing something. No other Bat-Family in this issues means no Damian, who was present (and, according to Thomas, responsible) for Alfred’s murder, and I guess I’ve never had any feelings about Alfred’s death because it still hasn’t landed for me in the actual story. Issue #85 is no different.

We do get a resolution for Flashpoint Thomas Wayne, but there’s also just enough of an opening left for his return. (I hope he doesn’t come back. King did some really remarkable things with him, and he said everything he needed to say about Batman via Thomas and Bruce, and I hope he leaves it here.) Gotham Girl gets an interesting epilogue that takes place at a location where she and Batman once shared an important conversation. Bane, as I said previously, remains barely a presence in his own story. The big question, then, is what does King do with Bat and Cat?

For the most part, I’m pretty happy with how it all plays out, and King’s solution is a bit of a narrative cheat that I predicted a long time ago. Though some will feel it’s a cop-out, I appreciate the sentiment enough to give it a pass as King transitions to his new Bat/Cat book in 2020. Regardless of how he settles things between them (for now), he firmly establishes Bruce Wayne as the one and only Batman, and I’ll always say amen to that.

Of all the superb artists King brought onto this book over the last three years, Mikel Janín was always one of the most memorable. It’s fitting, then, that he joins King in concluding his run, and his handsome work here (on 35 of the 38 main story pages, with a transparent three-page assist from Hugo Petrus) is off the charts. I’ve always said this book’s secret weapon was colorist Jordie Bellaire, so seeing her name in the credits was truly wonderful. There’s a lot of action and emotion and story in these pages, and Janín and Bellaire tell as much of the tale as King does.

There’s also three-page epilogue by incoming writer James Tynion IV, who himself is no stranger to Gotham City as he prepares to take the reins from King. I don’t agree with his reasoning here for why The Joker is keeping a particular secet, and Guillem March’s appropriately exaggerated art is as off-putting as the text demands. My Batman sensibilities have never gelled with Tynion’s style, but I know a lot of fans really love his writing, and I hope he cooks up something solid for all of us.

But for now, I’d like to thank Tom King from the bottom of my heart for creating MANY of my all-time favorite Batman stories from my more than four decades of reading the character. I’ve been writing reviews for Jett and BOF for over a dozen years, and I’ve never been more challenged by the gig or had as much fun with it as I have reviewing Tom King. I’ll be revisiting these stories and introducing them to friends for as long as I live…and just as all the best stories do, the Bat-tales King as told here will outlast us all.

Thank you, Tom. I can’t wait to see what’s next. – John Bierly