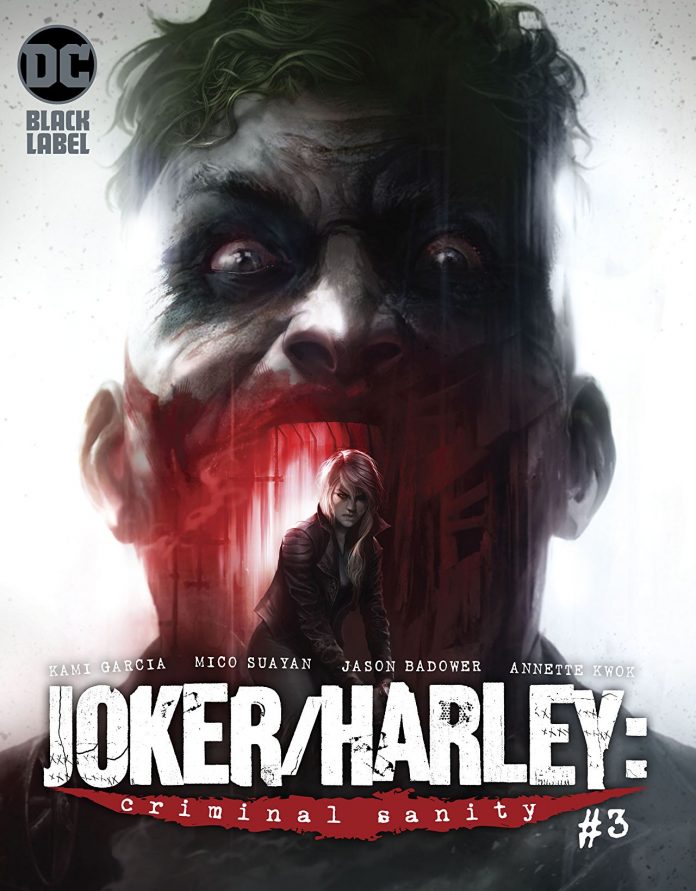 SYNOPSIS: Harley Quinn follows the evidence-and it leads her to a dangerous conclusion: she might know the true identity of the serial killer she’s hunting. But as Harley digs deeper into The Joker’s past, he is watching her…and leaving a trail of bodies in his wake. Gotham City has never needed a hero more!

Gotham is as dangerous as ever. A serial killer is manipulating corpses into haunting pieces of art, leaving a trail for the police and their special investigator, Harley Quinn. As the bodies, and images, pile up, she starts to cross off suspects and zero in on a killer clown…and his real identity.

That basically summarizes the latest issue of JOKER/HARLEY: CRIMINAL SANITY #3. This month, we move along in the story a little more, connecting a few minor dots and getting another gruesome murder scene. But after reading the last page, I couldn’t help but feel a little…unfulfilled.

Writer Kami Garcia does a commendable job continuing the patient, haunting pace of the previous issues. This story is a massive onion, and she’s slowly peeling back each layer. It’s just this layer seemed thinner than the previous. I didn’t feel like there was a payoff or big revelation anywhere. Plus, the book just sort of ended. Now, she’s done that previously (twice) that kept this series unique, but here it just bothered me for some reason.

Mico Suayan continues the gorgeous black & white, present-day images where there’s an extra focus on realism and shadows. Seriously, every panel is flawless. Meanwhile, Jason Badower takes over on the colored, flashback panels. While it still looks good, it’s noticeably more animated than previous issues with Michael Mayhew. Overall, the art still stands out in a highly stylized way. I dig it.

We’re only a third of the way through JOKER/HARLEY: CRIMINAL SANITY and this is the first time I felt it had pacing issues. While I’ve preached thus far that it’s a patient detective story, we didn’t get many revelations here to make the issue stand out. For a book that’s going to be bi-monthly, I think it could test the patience of readers. Especially when they’re paying $5.99 for each chapter. A worthy read, but maybe a little too slow here. But I’ll be back next month. – Ryan Lower