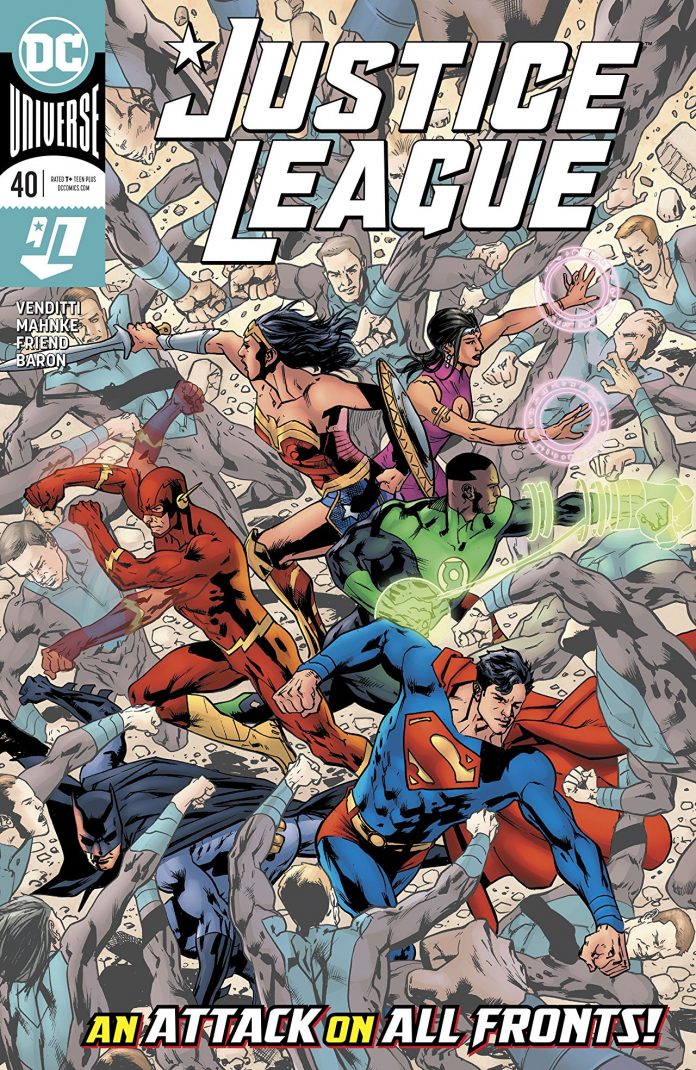 SYNOPSIS: The next chapter for comics’ premier superteam begins! An unexpected arrival from the stars brings a dire warning to the Justice League: A new breed of conquerors is on the march. Led by Superman’s nemesis Eradicator, a genetically engineered, super-powered strike team has come to subjugate Earth. To aid the Justice League, Batman makes the unprecedented decision of enlisting an ancient, unrivaled power, which calls into question who, exactly, is in charge. With the League on unsure footing, will they be ready to save the world?

What a difference a week can make.

Last week I read an issue of Justice League and wrote an issue review. I didn’t really enjoy doing either. In fact, I wasn’t even ready for Justice League #40 (literally, I thought it came out next week) and I certainly wasn’t excited for it given the disappointment I felt coming out of JL#39.

Now, I can’t say I know a lot of what’s going on in this issue. I don’t know when it takes place. I don’t know which version of a couple of characters appear here. I don’t even know if this is the “same” League that appeared in Snyder’s run. But I know this is one heck of a fun issue.

And I know that it opens in rural Minnesota.

After a potential threat crash lands in the Land of 10,000 Lakes, the league arrives in the most polite state in the nation to investigate. After a brief battle, seemingly fueled by confusion, we discover that the new arrival is Sodom Yat, an honorably discharged former-Green Lantern and contemporary of John Stewart. Yat, a Daxamite, warns of an impending invasion by a group of genetically modified brethren. But who is responsible for weaponizing this Daxamite and leading them on a quest to colonize and…eradicate…Earth?

Dang. I gave it away. It’s The Eradicator. You got me.

Yes, The Eradicator, the super-powered Krypto-tech designed to ensure the survival of the Kryptonian race and culture. The same Eradicator who played a pivotal role in my personal favorite comic mega-event, The Death and Return of Superman. But why is he so interested in the Daxamites, you ask? Well, because as writer Robert Venditti informs us, the Daxamites descend from a group of Kryptonian ancestors that inhabited an off-planet settlement. This is his chance to bring back an entire race.

As mentioned, Robert Venditti takes over the writing duties following the “Finale” of Scott Snyder’s run on the title and, from first impressions, he has something pretty entertaining in store for readers. Right away, it’s easy to get a taste for what seems to be planned. Inter-character dynamics and the nature of teamwork seem to take the forefront in the storytelling right away, with characters establishing and subverting their traditional roles.

In particular, there is a series of panels highlighting Batman and his tactical leadership of the team. It’s really fun to see human Batman calling out formations and giving strategic direction in battle after that aspect was largely absent in the preceding storyline. Even more interesting is seeing John Stewart move in on Bruce’s territory as the plot unfolds and Stewart’s experience becomes a key component. There is a bit of friction displayed here that I’m excited to watch unfold.

Speaking of roles on the team, the resident speedster appears to be having some trouble harnessing his abilities. When Flash’s speed isn’t as reliable when you need it, what role does he play on the roster and how does he respond?

“The Invasion of the Superman” opens with a strong first issue. The artwork by Doug Mahnke is as good as the writing. Mahnke’s pencils are a strong fit for DC’s “house style” with a more traditional approach than Jimenez, while not lacking visual interest. His character work is strong, with distinct body language and facial features for each character. I feel like this aspect of team books is often under-appreciated, but when drawing this many muscle-bound characters, I always enjoy it when artists make the effort to depict each uniquely. Mahnke’s panel work is linear enough to serve a fairly direct plot well, while not becoming too blocky or redundant.

Overall, this is a great issue of what seems to be a promising run on the title. I don’t know how or if this fits into the larger story being told at DC but I’m looking forward to the next issue. That’s something I wasn’t feeling a week ago and I’m very happy about it. – Garret Grev