BATMAN BEYOND #41 Review by Matt Whaley 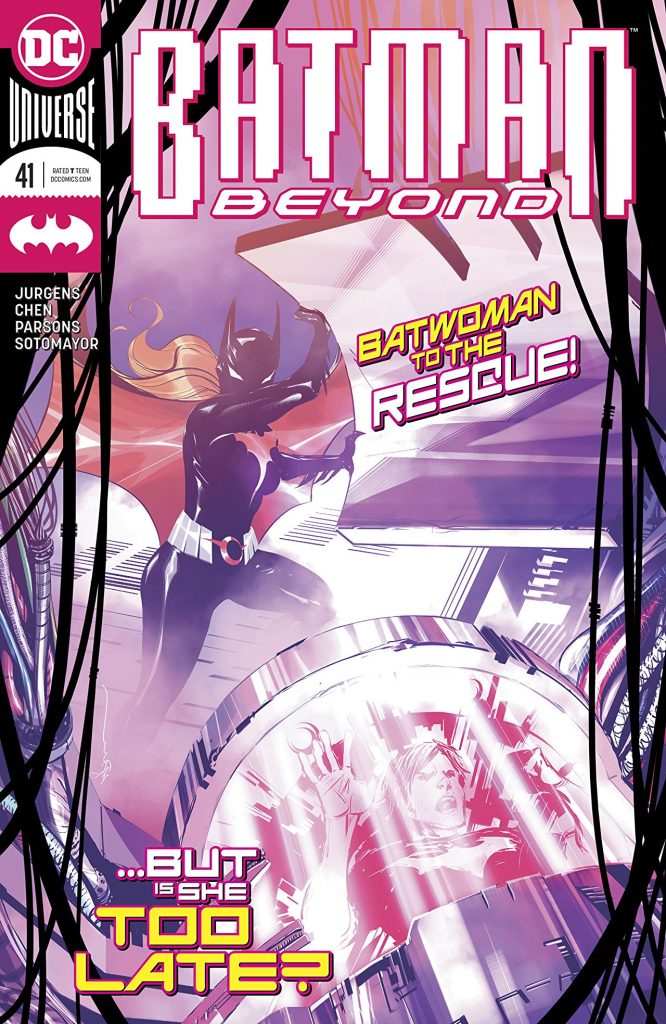 The woes that plagued the last issue are still present this month. The revelation that Batwoman is Elainna Grayson just didn’t land for me. It didn’t feel surprising or super impactful. That’s not to say that it couldn’t have worked with the character, the writing just didn’t make it compelling.

Dan Jurgens expands on her reasons for taking up the mantle in this issue, but not by much. There’s not a ton of action this month, but what action is there works fairly well. I like what they’re doing with Terry in this issue. Sure, it’s a plot device that’s been done countless times before, but with the character of Blight, it makes sense and it’s done well.

Once again, the art is great and the overall art style fits. Sean Chen and Sean Parsons nail it again this issue. The design of Blight as he’s melting down and running out of time is fantastic.

Overall, this issue just feels like a means to an end. Is it worth reading? Of course. Is it going to be a memorable issue with plot points that you look back on and think ”I’m really glad they decided to add that?” Probably not. Give it a read if for no other reasons than the great artwork and the fact that it tries to bridge the gap to the climax of the story arc. – Matt Whaley

RED HOOD AND THE OUTLAWS #43 Review by Javier E. Trujillo 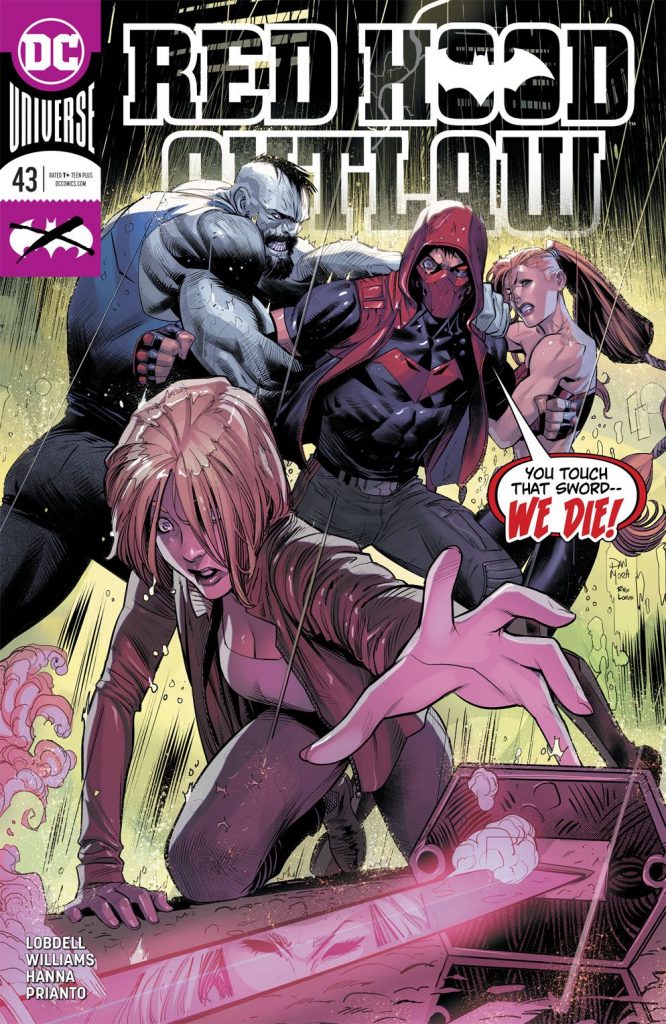 Right from the start, this book feels disjointed from the most recent DC events and from past issues as well. We open on a murdered Suzie Su who is narrating, which she can do as she is resurrecting herself. Apparently, her demise had something to do with Jason Todd and whoever killed her also stole documents from a safe at the Iceberg Lounge. Best not to think about it too much as we’re off to Germany to see what’s going on with Red Hood & The Outlaws!

We find our anti-heroes mid-fight atop a train in Wenzendorf. They appear to be tangling with some college-aged women, who seem to be more than a match for Jason, but nothing Artemis and Bizarro can’t handle. Christopher Williams provides the art this issue, with the reliable Scott Hannah on inks. Williams does a serviceable job on the art for me. He doesn’t blow my socks off, but he’s capable; if at times his faces are a little cartoony and simplified for my tastes. He does a fantastic job with the details in a two-page spread where the Outlaws get attacked from a new threat, bringing a sense of monstrous menace.

Colorist Arif Prianto dazzles, especially with the sunset effects as the train speeds along its merry way. He brings the scene to life with oranges, pinks, and purples. As the Outlaws retreat inside the train car, the light changes to reflect the new environment, bringing a coolness to the palette. When an explosion goes off, the vividness leaps off the page once again. The coloring was the most memorable part of the issue for me.

The story, unfortunately, wasn’t. The last several issues have felt like events have not lined up well. Every consecutive entry has me thinking that I’ve missed an issue or forgotten something. Several leaps forward in the narrative have been made without explanation and that continues here.

One glaring omission was the lack of Generation Outlaw. Are they still a group? Is Jason still teaching them? Are Artemis and Bizarro going along with this? Were they just with Ma Gunn and we didn’t see them?  From what I can tell, Year of The Villain is still going and their involvement seems to be primarily this title so you would think they would warrant a mention after trying to build them up over the last arc.

Appearances by Suzie Su and Isabel Ardila pick up threads that have been dormant for six months. The same goes for The Untitled rearing their heads. Everything feels tenuously connected and after waiting issue after issue for things to be further explained I’ve kinda given up. Will Isabel’s fate be mentioned in the next issue? Suzie’s sub-plot also seems like something that will get brushed off with a glancing mention down the road, if it all. I’m happy to see the Outlaws outlawing together again, but it feels like nothing really happened beyond a mention of B and Artemis being stronger friends and Jason feeling lonely. We don’t see any of that connection, though.

While the comic has competent art and a lush palette, the story feels a jumbled mess leaving me scratching my head how we got here. Action sequences are well-staged, but the connective tissue isn’t resonating with me. After longing for Bizarro and Artemis to be reunited with Jason, it feels like nothing came out of their absence. We still don’t understand how they got home even! With four different artists over the last five issues and gaps in the story, the consistency (and my enjoyment of this book) is suffering and I’m not sure how Lobdell will recover it. – Javier E. Trujillo 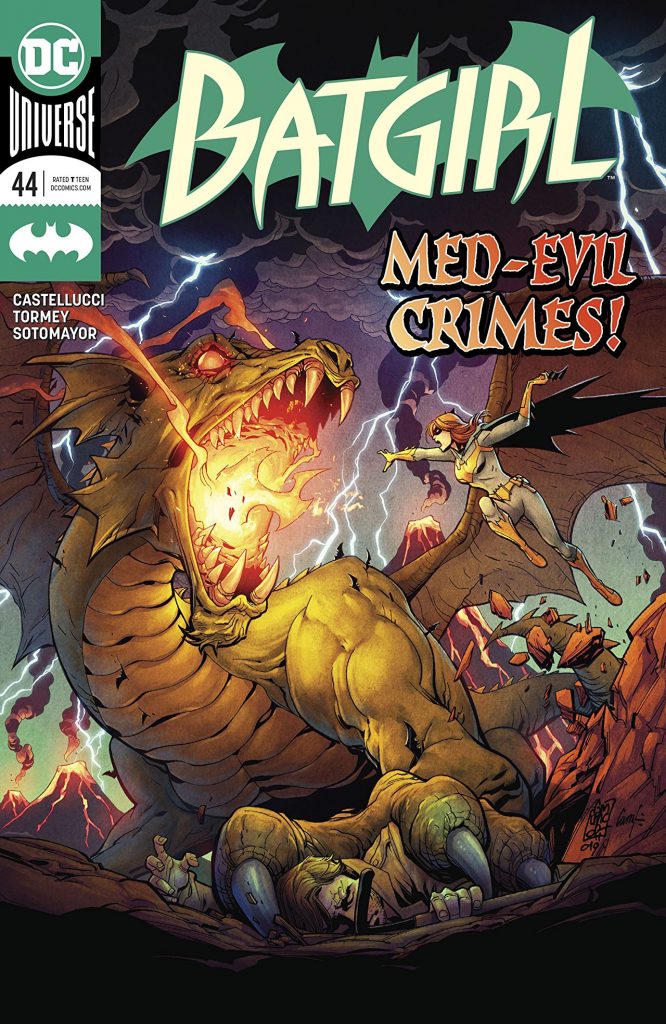 This is a pretty fun main cover from Giuseppe Camuncoli, Cam Smith and Jean-Francois Beaulieu. You got Batgirl taking on a freakin’ dragon, one hand cocked back with a Batarang, the other outstretched as if casting a spell to quench the beast’s fire. It’s a bold and eye-catching image, but hey, if you prefer a more traditional Batgirl pose with not one but TWO Batarangs, then Terry & Rachel Dodson have you covered on the variant.

As the main cover suggests, this issue is all about Batgirl versus a dragon (pay no mind to the synopsis pulled from dccomics.com, because it has nothing to do with this story!) However, this dragon exists in a fictional world as a metaphysical being fueled by the fear in our protagonists… or something like that, anyway. The main thrust of the story has Batgirl trying to figure out how to conquer that fear with love, courage, or whatever idea a fantasy author may decide is the necessary antidote to fear. This setup lets the art team focus on the dragon battling action, while Cecil Castellucci’s dialogue explores Batgirl’s newly emergent feelings for Jason Bard, and his for her. One section of monologue reminded me distinctly of Anne Hathaway’s love monologue from the movie Interstellar.

The writers have been working to show Jason Bard as a good, earnest guy over the past year so he can be a love interest for Barbara, but I feel like this makeover won’t hold up upon revisiting his original appearances as a backstabbing villain. But hey, maybe that’s the plan and there’s a turn coming up ahead.

Artist Cian Tormey kicks off this issue with a bold splash page featuring our heroine sailing through the air above the dragon’s fire, and with a set of impressively chiseled abs on full display. Hmm…

Pardon me while I go do some crunches…

…’kay, I’m back. Tormey goes into craggy detail with features like the dragon’s leathery skin, but keeps the inks restrained enough to avoid overcrowding and ruining the clarity and separation of figures. Colorist Chris Sotomayor uses a broad palette of vibrant colors, anchored by a consistent red-orange glow to set the mood of the fictional world of Unearth.

The action wraps up with the conjuring of a magical sword of unity, a revitalizing elixir, and a portal back to the real world for Babs and Jason, although the final page of this issue suggests something may have come back with them. I’m curious to see if the high fantasy elements continue to drive the story, or if we’ll ease back into more grounded Gotham City action. I’ll let you know how things shape up next month! – Rob Veatch III

The Top 10 “Inspired By” Batman on Film Songs