SYNOPSIS: As Gotham City continues its rise from the ashes of “City of Bane,” some familiar faces have returned to keep Gotham City exactly where they want it: Two-Face is back. But this time, he’s recruited some like-minded individuals to help him in his cause. With an elite team of split-personality special forces at his side, Two-Face and Batman square off in what could be their final battle, as a new ally arrives to help the Dark Knight…Harvey Dent?! 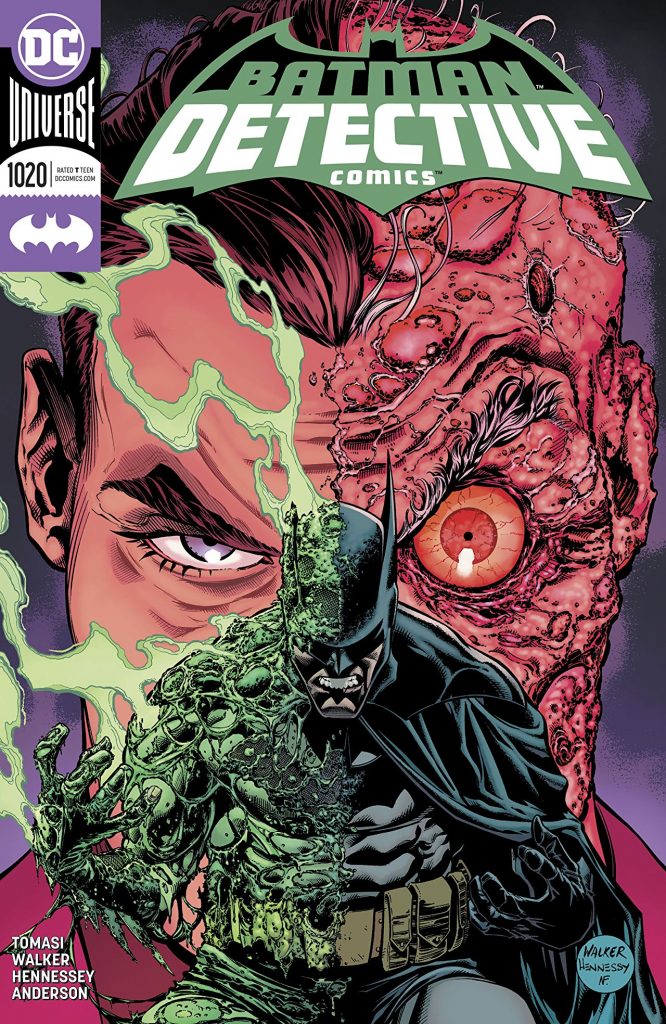 The journey that Peter J. Tomasi has taken us on since he took over writing duties on Detective Comics has peaked and valleyed.  Now, allow me to get back on my soapbox and proclaim how tremendous Tomasi is when he is on top of his game.  Issue #1020 is a wonderful Two-Face tale with a twist. Add in some of that old school detective work I love so much and you won’t find a more perfect Batman book this week.  Artist Brad Walker is back with the pencils, and his artwork is nothing short of magnificent.  Seeing the crime scene from the Dark Knights point of view is truly one of my favorite aspects of this book.  This Bat-fan couldn’t be happier that Walker is back in Gotham!

I’ve said it before in my previous reviews and I will keep saying it over and over again.  Seeing the Batman go through his due diligence on location at a crime scene will never get old.   The thought process, the forensic work.  It’s a thing of beauty, so often our Caped Crusader is depicted as more muscle than brains, more of a brawler, not in the stories that Tomasi is crafting.   The best thing about Tomasi’s writing is how often he is inside the head of the character.  The inner monologues of both Batman and Two-Face are as good as it gets.  Nailing how unstable Two-Face is yet at the same time he can switch it up and make Dent empathetic and almost ashamed of his actions.  It really is a sight to behold as you read the story.   What should not be forgotten is how well Tomasi even writes henchmen.  Batman takes down two of Dent’s thugs, kicking ass and asking questions but it’s the henchmen who sell the scene.  The mythological figure of Batman getting his perp to talk, there might not be anything more terrifying in the comic medium.

What stood out to me this issue was how Tomasi added that little something new to a character, with Arkham Knight it was the Harley-esque bit, with Mr. Freeze it was the Ted Bundy/Bonnie and Clyde aspect.  Keeping the history and the legacy of these characters is so important but to sprinkle in something new, something fresh helps keep the reader invested with new interest and I personally love that.  This still Two-Face, the anger, the ability to switch personalities on a dime, the “two” gimmicks are more than prevalent, but this religious cult aspect, wow.  Didn’t see it coming and when it drops on that final splash page I am begging for more.

Let me be the first to welcome back Brad Walker to Gotham City.  Walker returns after previously illustrating the Arkham Knight arc.  Walker’s artwork is just beautiful, from the rage in Two-Face as he duels wields pistols to that stern inquisitive look on Batman’s face, it doesn’t get better than this.  I love Walker’s panel placement; the long rectangles create a trail to splash page perfection.   Walker nails the crime scene investigation, that silhouette, the Bat-scowl.  This is as close to definitive as you can get.

Walker has a wonderful action scene that is every Batfans dream. Batman swooping down from above, flowing cape right into a sneak attack and a Tyson Fury hook.  It’s so wonderful to follow panel to panel.  One thing Walker does so well with both Batman and Two-Face is to use their eyes to sell their emotion.  I can’t get enough of the close-ups of their eyes.

The scene with Two-Face and the doctor is so interesting, as Two-Face’s personality changes so does Walker’s artwork, from the eyes along you know who is “in charge” at the moment.  The pain, the anger, the confusion, Walker does a really marvelous job of nailing all the emotions.

Detective 1020 is the book of the week, hands down.  It’s a vintage detective story, with beautiful artwork and one hell of a plot.  Two-Face is back in town with a new angle and Tomasi seems to be at the top of his game one issue in.  The pairing of Tomasi and Walker is a sight for sore eyes.  Both writer and artist knocked this issue out of the park nailing character motives and actions, it really doesn’t get better than this.  This is a must-have on your pull list! – Peter Verra