SYNOPSIS: Bruce Wayne and Batman have come undone. Powerless after learning the truth behind his family’s name and legacy, Bruce prepares to shed all of his secrets and make one final appeal to the people of Gotham as Azrael takes control of the city. 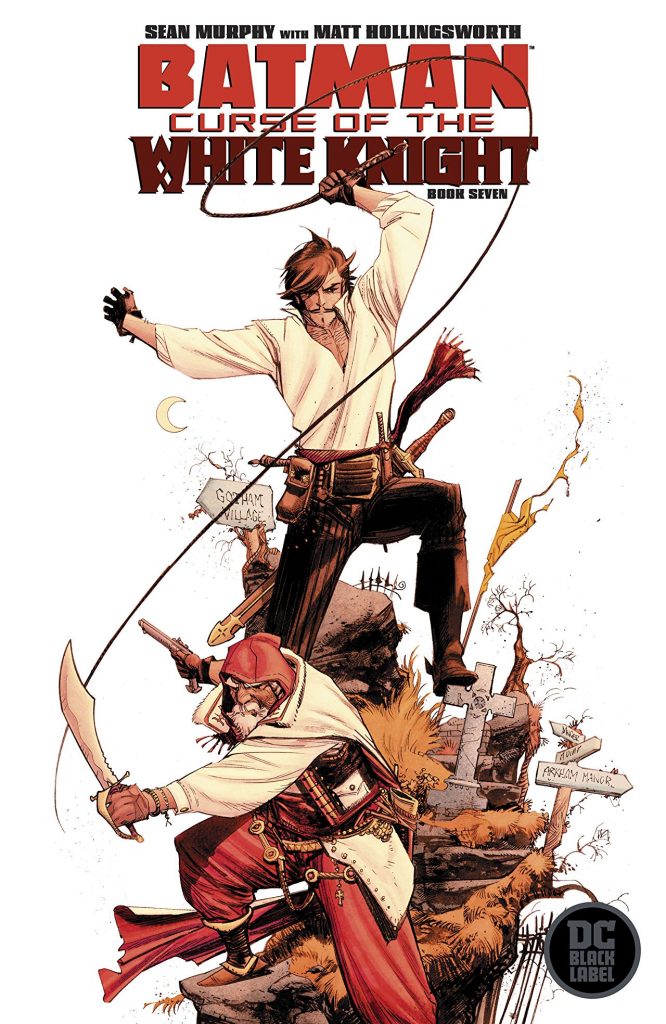 The penultimate issue of Sean Murphy’s CURSE OF THE WHITE KNIGHT slows down the action but braces us for next month’s showdown finale.

After a shocking ending to the last issue (which we should be used to by now), Bruce Wayne spends this month in reflection mode; thinking about Alfred, Gordon, and the citizens of his city. What will it ultimately take to achieve this goal he set out to accomplish so long ago? Perhaps the people of Gotham should know everything and make the decision themselves.

Meanwhile, Azrael (in a clear nod to Azbats from KNIGHTFALL), is in final mode. He’s run out of time, medicine, and allies. He’s prepped to take on The Bat and doesn’t have much to lose.

Murphy has concocted another worthy chapter of his successful WHITE KNIGHT sequel. He came out of the gate with excellent action and homages to the character of Batman and has since scaled back and made this a more personal journey. The finale of the original story was a big action set piece with tons of characters and explosions. This finale won’t require that and instead should feature Batmano A Azbatsmano. And it works. This whole journey has led to this, and Azrael has a lot to answer for.

My only confusion in this entire story is with reliance on the Wayne legacy. While yes, the reveal of Bruce’s heritage was surprising, it’s been played out over a lot of the issues. I’ve somewhat forgotten about it, and am not really connecting it with the present. That could just be me, and I understand how that can affect Bruce’s mind, but I’m more concerned with him taking down the current threat that’s hurting his allies.

Otherwise, no complaints (sound familiar?). Sean Murphy has cemented himself as one of Batman’s finest writers, and already owns a spot on the “best artists” shelf. Issue #7 plays out on a smaller, more personal note, and he really focuses on detailing emotion on every character’s face. We don’t question what anyone is feeling because Murphy has emoted it so well.

A great chapter in a great story. I can’t wait for the finale…but I also dread it. The gloves (and cowl) are off, and anything can happen.