SYNOPSIS: The mysterious master criminal known only as the Designer once brought together Gotham City’s greatest criminals to plot the perfect crime, and now his plan has been unleashed upon the city in all its might. Batman will go to any length to uncover the grand design, but Catwoman is the one who holds the greatest secret. If Batman wins against the Designer, he will lose everything. 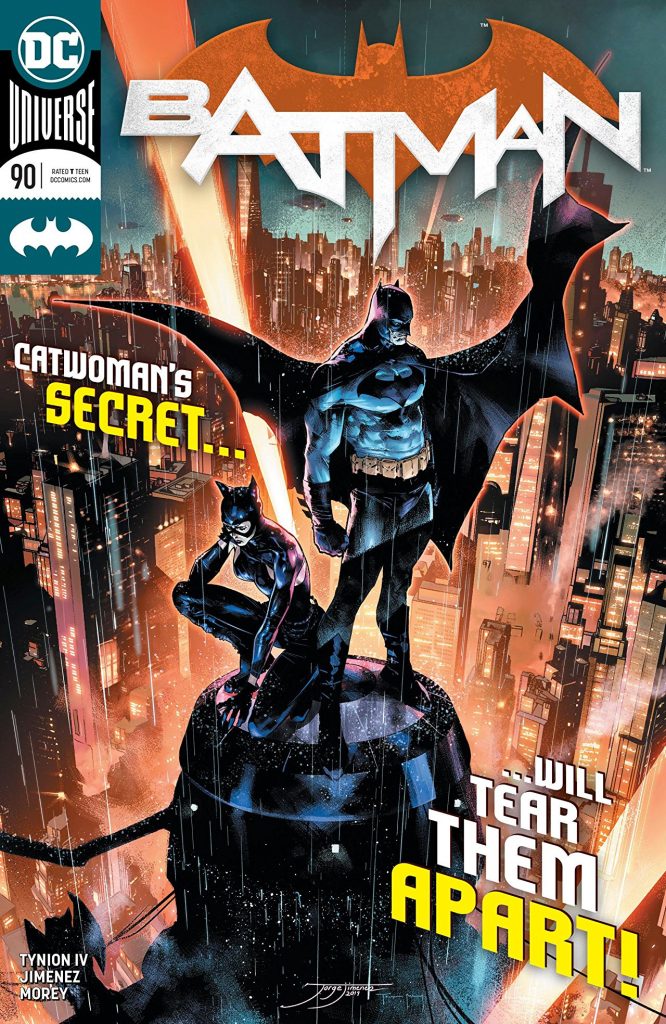 And it’s doozy, let me tell you!

Part 5 of “Their Dark Designs” mostly takes place in the past per Catwoman’s rooftop confession to Batman.  We learn that The Designer is some (immortal?) criminal mastermind that once offered four of Batman’s greatest enemies — The Joker, The Riddler, The Penguin, and, of course, Catwoman — the funding and resources to pull of each’s ultimate crime…and take down The Batman too.

Three of the four rogues accept The Designer’s offer — except for one holdout.  I’ll let you see for yourself just who it is, but I will say that his/her refusal set up everything that writer James Tynion IV has been, well, setting up since he took over BATMAN writing duties with issue #86.

I’m not sure how far back in “comic book years” all of this went down, but it was when Catwoman was sporting her purple “Jim Balent” suit, Tim Drake was Robin, and The Joker still had a bit of “comical prankster” in him.

As far as this issue’s artwork, it’s simply fantastic.  I’m really digging what artist Jorge Jimenez is doing here and love how he can capture a character’s emotions so well — like there are no word/thought bubbles needed.  Tomeu Morey’s are poppin’ and just about bring Jimenez’s pencils to life.

Now, there are still a few questions that need to be answered.

For one, despite the fact that all of The Designer’s hired assassins were taken down by Batman (with a little help), Deathstroke is still roaming the streets of Gotham freely…though it looks like Lucius Fox and Harley Quinn — yes, HQ is working with Batman — have that situation under control.

And most importantly, Catwoman’s confession didn’t just allow her to come clean with Batman, it also revealed exactly what The Designer’s grand scheme is…and why Bruce Wayne is the target.

Will Batman and Catwoman be able to thwart The Designer’s plan and save Mr. Wayne?

I suppose we’re fixin’ to find out! – Bill “Jett” Ramey