SYNOPSIS: The Justice League suffers defeat after defeat in the ever-tightening grip of the Eradicator. But do the heroes have a greater plan? It’s up to the Flash to outwit and outrun the onslaught of Daxamites, but his next step may be his last. 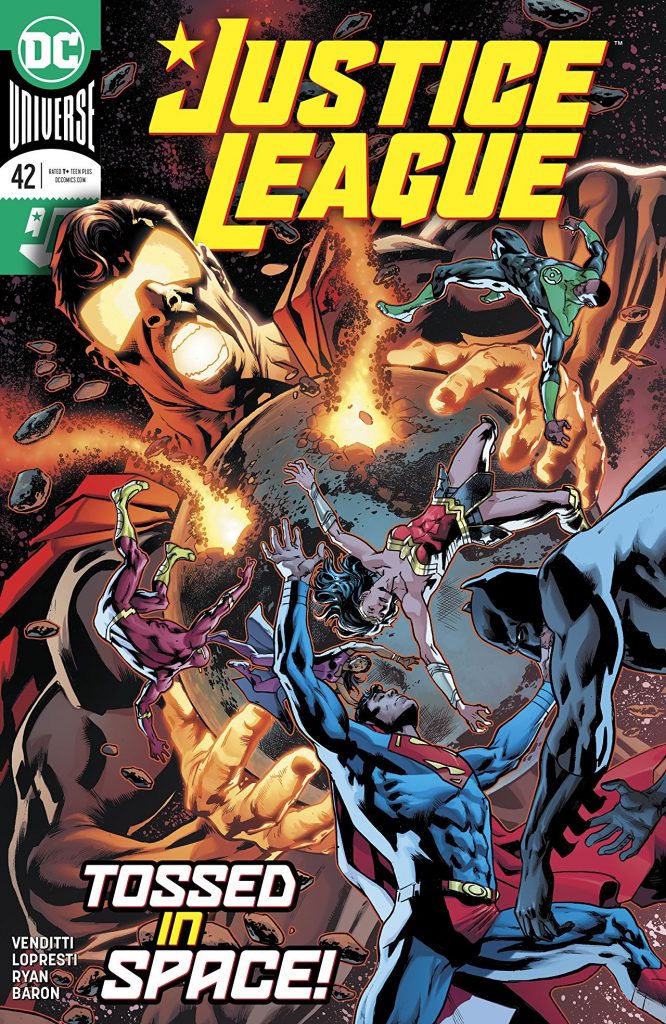 What happens when we start making compromises in an attempt to attain a goal? When do we lose sight of what we were trying to do in the first place? At what point to we pivot too far from staying true to our calling and end up on a different course entirely? I’m not sure how much deep personal reflection the Kryptonians programmed into the Eradicator, but I’d like to think these are questions our visored pal would start asking himself at some point soon.

Justice League #42 is another very enjoyable entry into the series and the new story being told by this creative team. The Invasion of the Supermen is rolling along quite nicely and delivering a fun team tale that shows some willingness to go deeper than mere fast-paced action and big battle spectacle, but those elements are certainly there in spades.

Robert Venditti has found a way to craft a narrative that satisfies a wide range of audiences. I really liked (the majority) of Snyder’s work on the previous run on JL but no one could say that it was accessible. You needed to be deep into Snyder’s work and DC continuity to follow all the threads that he was weaving together. It was still fun, but it was work. I’m not arguing for simplistic storytelling, and that’s not what Venditti is delivering.

The Invasion of the Supermen manages to tie back to DC history (90’s Death and Return of Superman, the cinematic Man of Steel) in a satisfying way that won’t take a mastery of string theory or a DC encyclopedia to follow while allowing for some elevated story topics to work their magic as well.

Team dynamics and personal challenges are reoccurring themes in the storyline. We’ve grown used to Batman always being the smartest man in the room and serving as the chief planner and strategist in the League, but what happens when other characters feel the need to challenge that authority and seek to contribute to the team’s prioritization efforts? Green Lantern and Batman have had a mini power struggle through the first three issues of this narrative and it’s pushing the team dynamics in a very enjoyable direction. Here we see GL object to Batman’s unilateral decisions and take charge of the team’s plan going forward. It’s a shift in team dynamics and one that seems to be pointing towards growth in both characters.

Flash is struggling with his self-confidence and ability to fully harness the speed force. Self-doubt isn’t something we get a lot of in team comics, there is often simply too many characters and plot mechanics to cover. Venditti instead gives the reader just enough information to build tension and creates a look at a character that is both struggling to understand his ability to contribute at less than 100% capacity while still finding a way to fill a much-needed role on the team. Aaron Lopresti proves himself a dynamic storytelling partner with some highly effective panels portraying both concern and resolve in the Flash. More on his artwork in a bit.

I’m most intrigued by what Venditti is doing with the Eradicator. As I alluded to earlier, I believe Eradicator has lost his way in his mission to preserve and protect the history and future of Krypton. We’ve seen him seemingly abandon actual Kryptonians in favor of their Daxamite cousins, genetically engineer a breed of “superior” Daxamites, and in this issue, he decides that he needs to further modify Kryptonian/Daxamite genetics with the help of Wonder Woman’s DNA. It would seem that the Eradicator has lost sight of his prime directive and I’m eager to see what Venditti has in store for his future. My prediction is that it is not good…

Lopresti’s artwork is very strong. Comparisons are sure to be made the masterful Jorge Jimenez given his work on the prior run on the title, and I can see a bit of that. Both artists have a strong sense of movement and character detail and while Lopresti’s work is a bit more traditional and commercial it does not lack in some stylistic flair or detailing. In particular, I find his work on the costumes to be strong whether it is in the Flash’s pipelines, Superman’s regal cape folds, or the sharp and angular approach to the Batsuit. He manages to craft a beautiful issue without overly relying on sexy splash pages and the pace of the issue is aided greatly though that approach.

Overall: Don’t miss this book. It’s big comic team storytelling that manages to have depth and heart while being a very fun read. – Garret Grev