SYNOPSIS: A decade after Zombieland became a hit film and a cult classic, the lead cast (Woody Harrelson, Jesse Eisenberg, Abigail Breslin, and Emma Stone) have reunited with director Ruben Fleischer (Venom) and the original writers Rhett Reese & Paul Wernick (Deadpool) for Zombieland: Double Tap. In the sequel, written by Rhett Reese & Paul Wernick and Dave Callaham, through comic mayhem that stretches from the White House and through the heartland, these four slayers must face off against the many new kinds of zombies that have evolved since the first movie, as well as some new human survivors. But most of all, they have to face the growing pains of their own snarky, makeshift family. 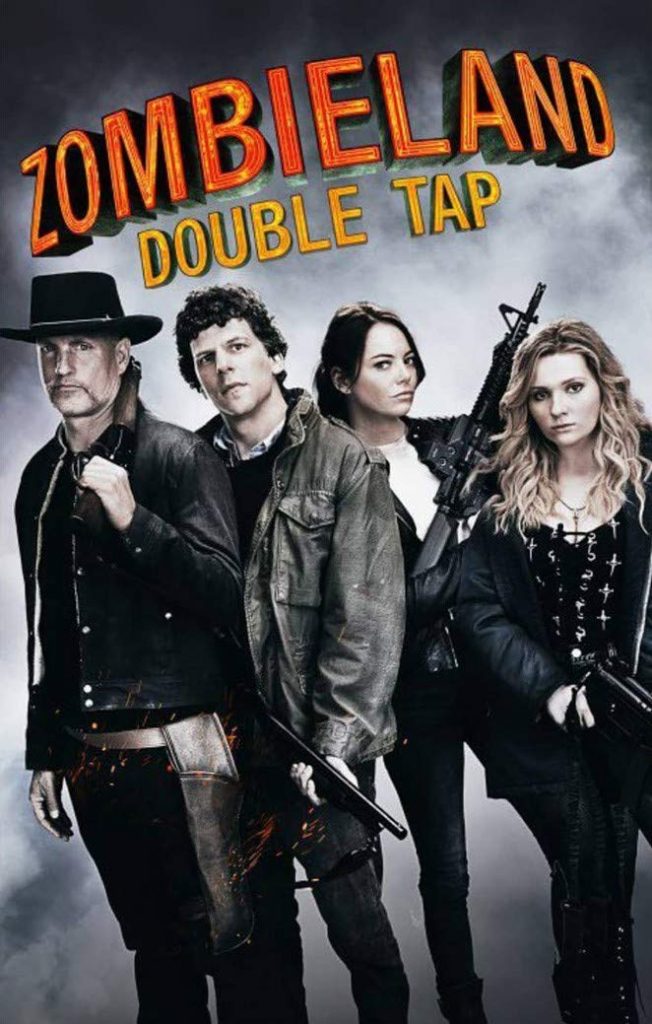 Zombieland: Double Tap is a welcome bit of respite from the more serious fare. Not one serious bone in its body to cause you any distress!

If you’re looking for straight-up entertainment, this film is just the ticket. It’s a sequel to 2009’s Zombieland released exactly 10 years later. If you saw that film, you already know the “family” who came together after a virus turned most of the world’s population into brain-eating zombies.

The fearless zombie killers include Tallahassee (Woody Harrelson), Columbus (Jesse Eisenberg), Wichita (Emma Stone), and Little Rock (Abigail Breslin). Apparently they’ve been looking for a permanent home for the last 10 years, and Tallahassee decides on the now-abandoned White House. There’s a problem, however. Little Rock is no longer a child and longs for companions — and a boyfriend — her own age. Of course, there are very few uninfected humans left. New characters must be introduced.

Little Rock and Wichita set out to look for another home more compatible with their needs, a decision that causes Columbus much distress since he and Wichita had been a couple. In her absence, Columbus and Tallahassee go to the nearest abandoned mall to “shop” where they run into Madison (Zoey Deutch), a rare uninfected human. She’s naturally lonely, so she’s very glad to meet Columbus. She’s excessively ditzy, but very pretty, so Columbus is quite glad to meet her, too.

Wichita reappears without Little Rock, who has run off with a flower child named Berkeley (Avan Jogia) to go to Graceland — yes, that Graceland. Wichita isn’t particularly happy that Madison and Columbus have hooked up, but since there’s really no choice, the new foursome set out to find Little Rock. In a motel/Elvis museum, they encounter Nevada (Rosario Dawson) who takes a shine to Tallahassee. If you’re into Elvis memorabilia, you’ll like this part of the film.

Soon, two new, uninfected humans arrive in a monster truck. Albuquerque (Luke Wilson) and Flagstaff (Thomas Middleditch) have been traveling around killing zombies, and they strike up a kind of competitive friendship with Tallahassee and Columbus. You can guess that this combination will have consequences.

Meanwhile, the original three learn that Little Rock and Berkeley aren’t there, and Nevada informs the group that they’ve left for a safe haven called Babylon, a peaceful commune where weapons aren’t allowed. Although this concept is totally foreign to them, they set out for Babylon. Hilarity ensues.

If you think I’ve given away the plot, please know that the “plot” is merely a vehicle for the over-the-top slapstick humor of the film; and THAT is what it’s really about.

It’s one long, continuing visual and conversational joke; not to be taken seriously in any way.

So will zombies show up at Babylon?

Will the intrepid “family” be able to fight them without weapons?

That I’ll leave it to you to discover!

If you saw the 2009 film, you may remember that Bill Murray played a significant part, but that he ended up dead at the hand of Columbus, accidentally, of course. Murray actually appears as himself again in the current film. How? Well, you’ll see. You should also stay for the credits because there’s a continuation of his “part” during them.

I thoroughly enjoyed this film even though it’s mainly a piece of fluff and I’m still laughing!

Fine family fun, but leave the kiddies at home! Extreme profanity dominates the script and may be a bit much for some. More sensitive viewers might want to opt for Downton Abbey or something else more genteel.

If you’re looking for complete escapism this weekend, I highly recommend Zombieland: Double Tap. Sophisticated film-making it is not, so don’t go expecting depth, symbolism, or any of that stuff.  But if you’re in the mood for a laugh, you’ll definitely enjoy it. – Jo Hyde

THE BATMAN is Returning to Liverpool