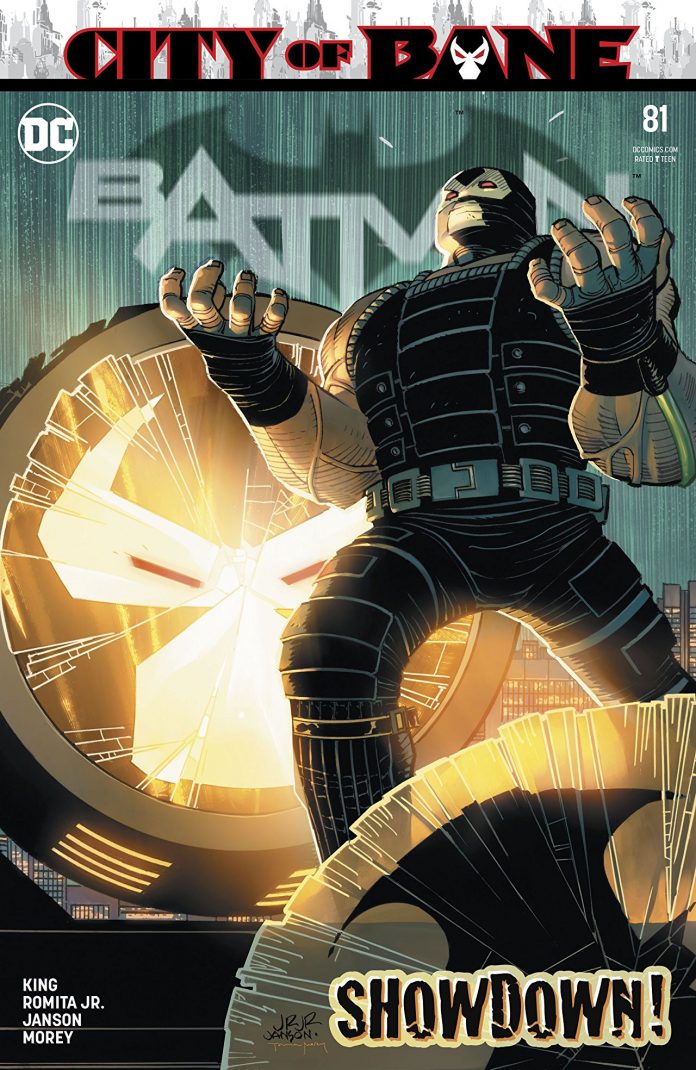 SYNOPSIS: It’s time for the big showdown. Batman is calling Bane out. But is the Dark Knight Detective ready to take on the foe who broke him worse than any other that came before? And what else stands in Batman’s way, to put an obstacle between him and his enemy? Tread lightly, Batman, because not only do the lives of your son and trusted friends hang in the balance, but your entire home could collapse on top of you!

Bruce Wayne finally returns to Bane-beleaguered Gotham City in this seventh chapter of “City of Bane,” which I liked better the second time I read it. If you like what Tom King has been doing, you’ll like it. If not, you’ll probably be able to point to this very issue as an aggressive committing of every crime behind every reason why you don’t.

As Bruce told Selina at the end of issue #80, Thomas Wayne has a decision to make. Will he follow Bane’s orders to shoot his grandson, Damian Wayne, in the face (even if Damian doesn’t exactly see this man as his grandfather)? Or will he do what any Batman, even one from another reality, does when faced with Bane and fight back? Thomas has just enough time to choose, and choose he does, but it doesn’t matter, because he’s about to find out the hard way that Damian’s resourcefulness is indeed a family affair.

As Damian’s contingency turns the Batcave into a venue for vigorous and vicious violence, Bruce and Selina fight their way through the goon squad guarding the gates of Arkham Asylum. As they punch and kick and kick and punch, Bruce tells her that every detail of his seeming defeat was deliberate, right up until that one moment on a snowy mountaintop (in issue #75) when he needed help and Selina cosmically answered the call.

Yes. Every detail. Including the moment when he savagely struck Tim Drake in the face back in issue #71. Your acceptance of the explanation may vary. I initially wasn’t amused, but I also have to admit that it’s a pretty “Batman” thing to do.

As Bruce reveals ace after ace he’s been keeping up his black-finned sleeves, the surprise party Damian threw for dear old granddad takes… a turn. (Regardless of how it turns out, Thomas Wayne is my favorite character in this issue.) And through it all, the biggest wildcard of all remains that massive thing that happened at the end of issue #77. I’m still not sure what we’re supposed to think about that. Is Bruce being overconfident because he doesn’t know that it happened? Or was it another elaborate trick that was part of Bruce’s plot all along? After all, Bruce has as many methods of faking something at his disposal as Bane does. Without spoiling anything, certain party-goers in this issue certainly think it happened, unless they just want the person the party’s being thrown for to THINK they think it happened because it’s all part of the plan? Maybe?

And that’s the thing. There’s so much “maybe.” We’re 10 issues out from Bruce’s punching of Tim before we get an explanation, and there are still questions on the table, and we’re still sorting out what was real and what wasn’t and what was planned and what wasn’t and how and when and who and why and all that. We’re 31 issues since the wedding that didn’t happen and the revelation that the non-nuptials of Bruce and Selina were all Bane’s fault. We’ve already had one issue (#72) where Bruce’s enemies make the case that they’ve controlled every moment since King’s #1, and now we’re getting Bruce’s take that’s essentially the same thing. I think it’s interesting. But I do understand why many of you feel it’s dragging on.

Visually, this one’s a beast. Pencils by the legendary John Romita, Jr. and inks by certified Gotham City guardian Klaus Janson evoke the raw, ragged lines of Frank Miller, and Tomeu Morey’s palette provides great atmosphere and engaging excitement, especially for characters whose costumes require the most color. And then, in the end, there are two superbly bizarre pages by Mitch Gerads that have a certain GCPD staple singing a song that sums up how some of the readers might be feeling these days.

“I’m still here,” as Bruce has said at pivotal moments throughout King’s run. I admire the writer for never taking the obvious next step, even as he smashes that challenge against its limit and chucks it well beyond. If you’re on the fence, stick with it. If you’ve already jumped ship, I do think this story’s pacing will read better in a collected edition. In the meantime, I’m still invested in what’s next, and Tom King proves issue after issue that he is, too. – John Bierly