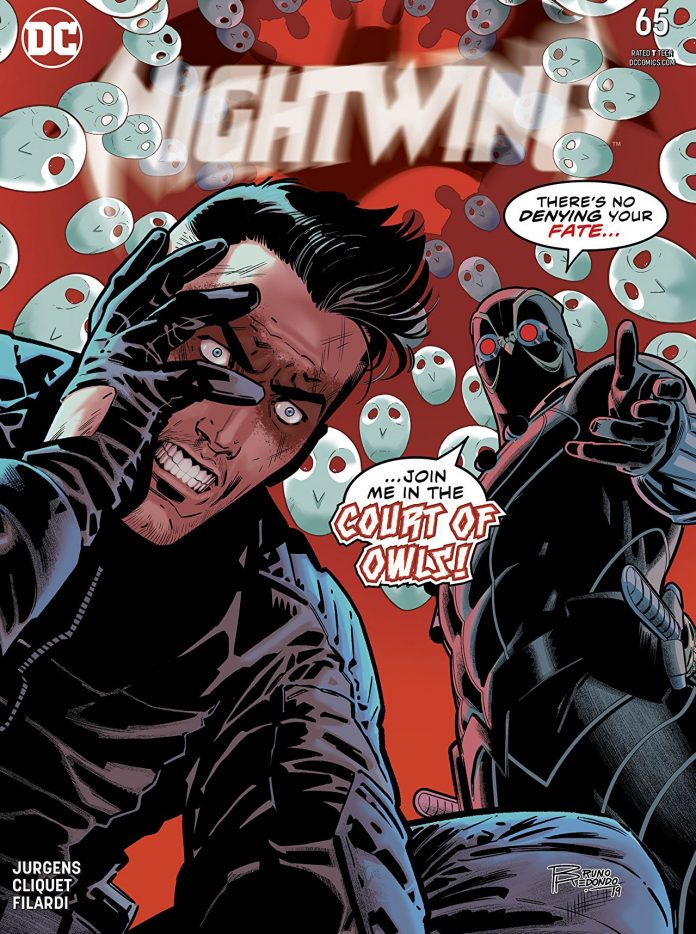 SYNOPSIS: While the Nightwings do their best to contain the situation in Blüdhaven, Ric faces off against Talon! But the battle is one not just of brawn, as Ric’s psyche is taken to its limits when he learns about his family history for the first time since his memory was wiped. Will Ric Grayson at last become the Gray Son of Gotham he was destined to be, or will he choose the life he’s been trying to establish for himself in Blüdhaven?

Ultimately, I can’t say too much about this issue without spoiling it. I will say that I’ve defended the Ric Grayson storyline and, if they’re going where I think they’re going, I’d buy a ticket to that ride, too.

When Bruce Wayne lost his memory toward the end of Scott Snyder’s run on BATMAN we all knew he’d be back and were keeping an eye on our watch until he did.  We expect Bruce Wayne to be Batman. Anything else is a downgrade.

If Grayson has to go under a different name a little longer while fighting an ongoing battle between his apathy and his will to do good … let it be. Grayson has been Robin, Nightwing, Batman a Spyral agent and an amnesiac. His continual change of character is essential to who he is.

NIGHTWING #65 mostly revolves around a fight between Grayson and William Cobb aka Talon. It’s my favorite comic book confrontation since Batman took on KG Beast in BATMAN #57. A true slugfest made all the better by the dialogue. Talon truly reaches Bane-level taunting ala THE DARK KNIGHT RISES.

“Your tactics are faulty. You were taught that there’s a line not to be crossed…you must be broken of that softness…”

There’s a beautiful moment when Grayson takes a beating and while recovering lays his eyes on two tire iron-looking weapons that happen to be nearby. The metal shines and Grayson grins as if it was providence for him to land next to weapons that deep down in the recesses of his memory he knows he can use to bring great pain to his opponent.

Off the top of my head, I believe this to be the first time Grayson has wielded weapons similar to his Escrima sticks since his memory loss.

I’m glad Talon says that he’s been going easy on Grayson’s friends and allies leading up to their fight. I’d hate for a villain who has been built-up as a badass fail to purposefully kill anybody (as morbid as that sounds).

The fight has a true sense of weight to it since previously Barbara Gordon and Alfred have dropped by to gently remind Grayson of his past but respect his choice to be who he is now. Now another figure from the past, one connected to Grayson’s near-recruitment into the Court of Owls, is standing before him as “destiny” in full force.

Dread it, run from it, destiny still arrives (Yes, I just quoted Thanos in a DC review … I couldn’t resist).

Finally, there’s a brief Year of the Villain crossover element to the issue. All I can say is: meh, hope it doesn’t distract too much from the story. – James Armstrong

“The Case for Batman’s Malleability” by Joey Perotti