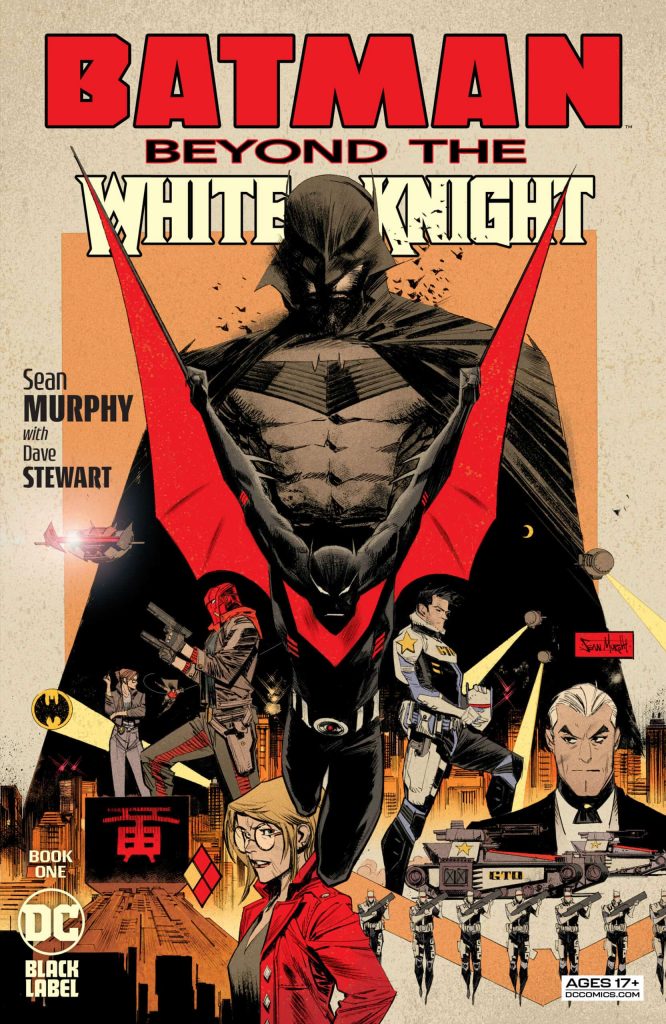 SYNOPSIS: A lot can change in 10 years, especially in Gotham! Batman, a.k.a. Bruce Wayne, may be behind bars, but the real criminals are still out there. Gotham Motors CEO Derek Powers has seized control of the Wayne family’s assets and is using them to transform the GTO and the city they’ve sworn to protect. Crime is down, but at what cost?

A new Batman has emerged in Powers’s city, and only Bruce is fully aware of the dangers to come. It’s time to destroy the mantle for good, but he’ll need one of his forgotten sons’ help to do so. Enter Jason Todd…the first Robin?!

In this thrilling sequel to the blockbuster comic book hits — Batman: White Knight and Batman: Curse of the White Knight — writer/artist Sean Murphy invites the audience to go beyond the Gotham they know to discover an engrossing new take on the city and its heroes. Welcome to Neo-Gotham and the world of Beyond the White Knight!

Fans of the WHITE KNIGHT universe (aka the Murphyverse) are in for a treat this week, as we visit the next chapter in the highly-acclaimed series. BATMAN: BEYOND THE WHITE KNIGHT #1 is an interesting, exciting, and refreshing return to the world the creator has so perfectly established.

Taking place a bit after the events of both CURSE OF THE WHITE KNIGHT and the HARLEY QUINN series, we’re quickly introduced to the newcomer of this chapter, Terry McGinnis, as he journeys into the old Batcave. We know he’s following instructions from a mysterious boss (who BATMAN BEYOND fans will recognize) and discovers a suit that was never used by Bruce Wayne. Speaking of the OG, we catch up with him behind bars, the silver lining (and silver fox) of the penitentiary. He’s never looking for trouble but still brings justice. His (and the other inmates’) actions call for the GTO to interfere, and Bruce doesn’t like what he sees. Add that, plus headlines of a new Batman, and our hero is motivated to once again be a free man.

I feel like that setup was a little wordy, yet there are quite a few additional plot threads (and surprises) I didn’t even mention. That has been the beauty of Sean Murphy’s universe. Starting clear back in WHITE KNIGHT #1 (which I, fortunately, jumped on right away), he’s always included many story elements that built upon each other. Nothing has felt too crammed, confusing, or unnecessary. It’s an impressive juggling act to include so many elements and everything just clicks.

I’m happy to say I think that’s what we’ll be getting in this latest chapter.

Of course, Murphy brings his art to match his storytelling capabilities. If you’ve liked everything you’ve seen in this world up to this point, you won’t be disappointed here. The story’s setting is futuristic, but won’t ever feel outdated. It fits that “timeless” vibe with a few touches of “futuristic.” His version of the BEYOND suit is familiar, yet sharp. It looks great. And the shading of each panel matches his great work from before.

Overall, a wonderful debut issue into this next chapter of the WHITE KNIGHT story. We check back in with familiar faces, while also planting the seeds for a new adventure. As we have seen before, anything can happen. And I’m in for it. – Ryan Lower