SYNOPSIS: It wouldn’t be a Joker story without a surprise…and right on cue, here’s an unexpected one-shot epilogue to Joker: Killer Smile! Young Bruce Wayne grew up watching The Mr. Smiles Show-and the show might have been watching him back! And not only was young Bruce watching, but he was also listening…listening as Mr. Smiles spoke across the airwaves only to him…

The Eisner Award-winning creative team of writer Jeff Lemire and artist Andrea Sorrentino land one last gut-punch-turning the mythos of the Batman on its head in the most devastating trick The Joker has ever devised! 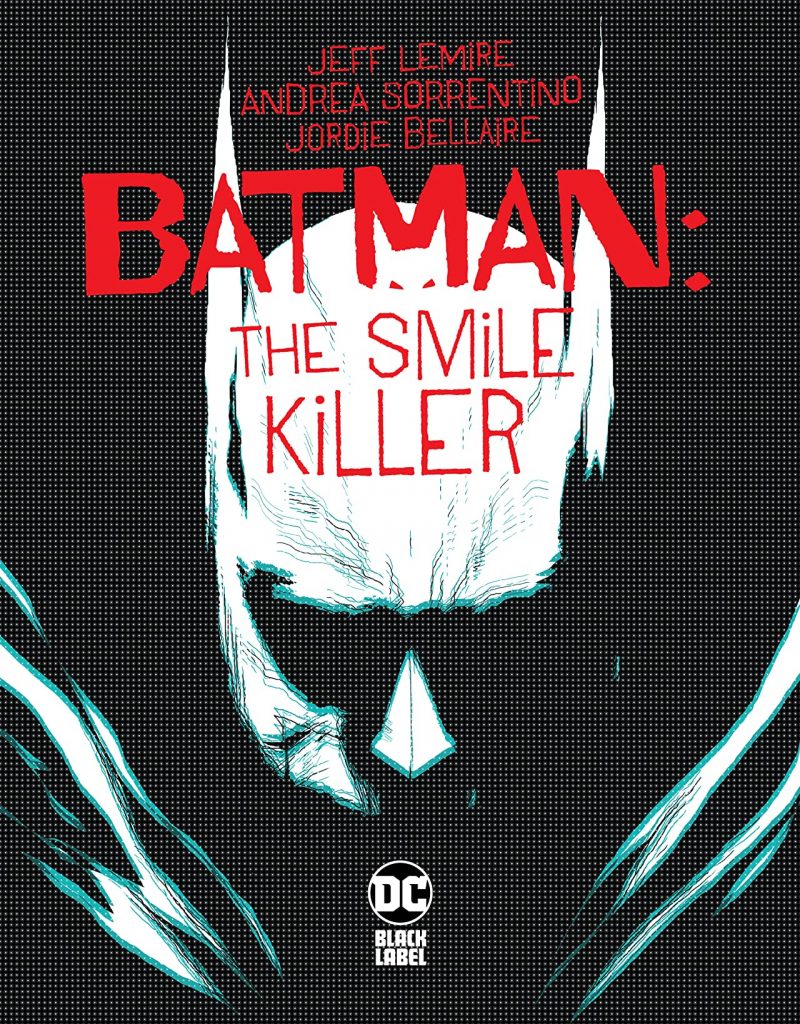 Mr. Smiles is back for a brand new adventure!

After the events of Joker: Killer Smile, the Joker is on the loose and is dead set on unleashing his lethal madness into the world.  His latest outing is more dastardly than ever.

Batman is called to a multiple homicide – three folks dead in a butcher’s shop – one is found hanging from a hook and two are crammed into a meat display case.  It all seems rather routine for the Joker, but hidden in the grisly scene Batman finds a memento from his childhood.  A puppet made out of a brown paper bag… A puppet called Mr. Pouts…

It all comes back to him.  He remembers that kid’s show he used to watch on TV when he was a child – Mr. Smiles Playhouse.  He remembers the clown hand puppet on the screen that asked him to do things… things to do only when his parents weren’t around…

So begins Batman: The Smile Killer, a kaleidoscopic journey of madness and mind games that will have the reader asking: what is truth?  What is fiction?  Will Bruce ever be able to distinguish the two?

The creative team behind Joker: Killer Smile is back!

Jeff Lemire throws the reader into the deep end of crazy here, playing on the idea of “what if Bruce Wayne is crazy and the Batman (and the Batman’s world) are just delusions within his sick mind?”

This idea, though certainly not new in conjunction with Batman lore, is one of my favorite premises – Lemire toyed with this exact scenario in his Moon Knight books.  He is truly messing with the psychology of the character, and it leads to some fun and twisty moments of mental imbalance.

The artwork by Andrea Sorrentino is chilling and wonderfully macabre.  Expect the same greatness that you saw in the Joker: Killer Smile books.

Lemire has stated that this is the conclusion to his story, but he marks the final page with the words “The End?” so I’m guessing there could be more.  And he certainly leaves the book on a huge cliffhanger, so here’s hoping! – John Funderburg