SYNOPSIS: Batman faces off with the Designer as “Their Dark Designs” reaches its epic climax! In the last year, Batman has lost more than he could have imagined, and now he faces a cost so dear it will change the course of his life. And there is worse on the horizon. In the midst of all the horror, he can feel the drumbeat of battle. “Joker War” is coming, and Gotham City will never be the same. 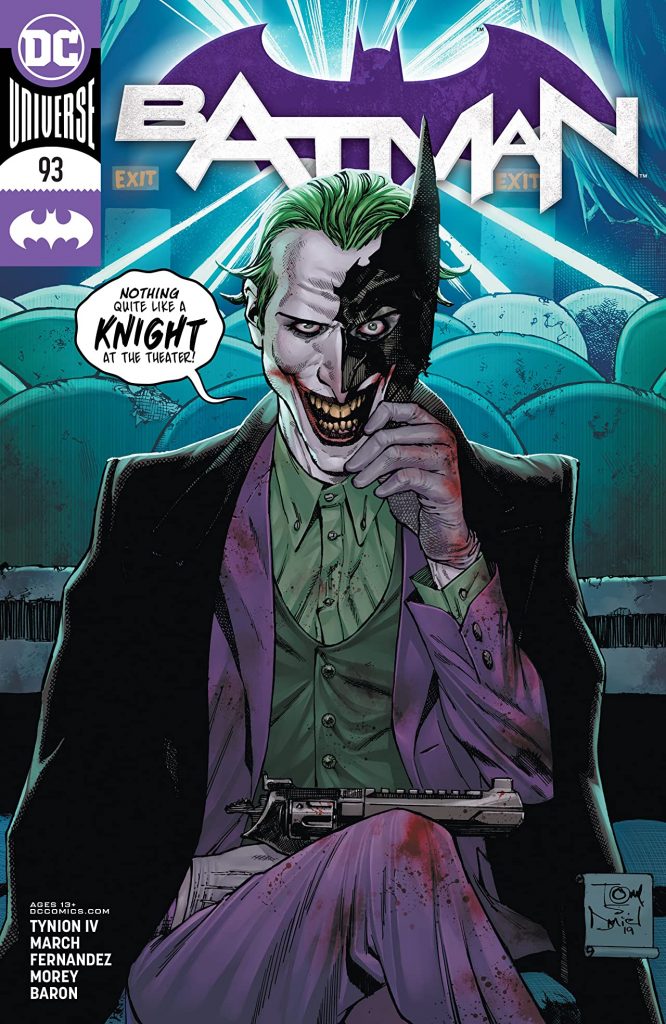 Everything that writer James Tynion IV has been doing since his run on BATMAN commenced has come to a climax.

“Their Dark Designs” comes to an end, but there’s really no ending to the story as Tynion’s BATMAN is moving directly into “Joker War”…I think.

Billed as the “epic climax” to Tynion’s first story arc, I found this issue to not very epic and very anti-climatic.  Yes, all of the different story threads reach a conclusion, sorta, but readers are still left hanging.

Essentially, it’s Batman vs. The Designer by way of a sword match as Batman rehashes/explains The Designer’s evil scheme.

But was it really The Designer behind this all along?

Frankly, I don’t get this character at all.  Maybe I missed something along the way with this The Designer. I know now who he was during the course of this story, but I’m not sure to whom he really is…or was.  And at the end of the swordfight, I still don’t know how, um, he is able to have a swordfight at all!

We also get resolutions/cliffhangers involving Catwoman, Harley Quinn, Punchline, and Harley vs. Punchline.  Oh yeah, Deathstroke shows up out of the blue at the end as well.

So, “Their Dark Designs” concludes, but there’s no real conclusion — I was like, “That’s IT?” at the end of BATMAN #93.  I’ve gotta admit, it was a downer after hanging with the story — which was quite good overall — for so long (8 parts).  Now, we get to inch our way through “Joker War”…I think.  I’m a little confused/concerned because it looks as if we’re getting a prelude first titled “Joker’s Billions.”