EDITOR’S NOTE: BOF’s Ryan Lower fills in for yours truly on issue #99 of BATMAN.  See y’all again come issue #100 and the finale of “The Joker War.” – Bill “Jett” Ramey

SYNOPSIS: “The Joker War” part five of six! Things have changed, as Batman realizes he can’t fight this war alone. He’s going to need help. Before he faces down The Joker, he must call up his trusty partner Dick Grayson! But can Dick reclaim his lost memories in time to join the battle? 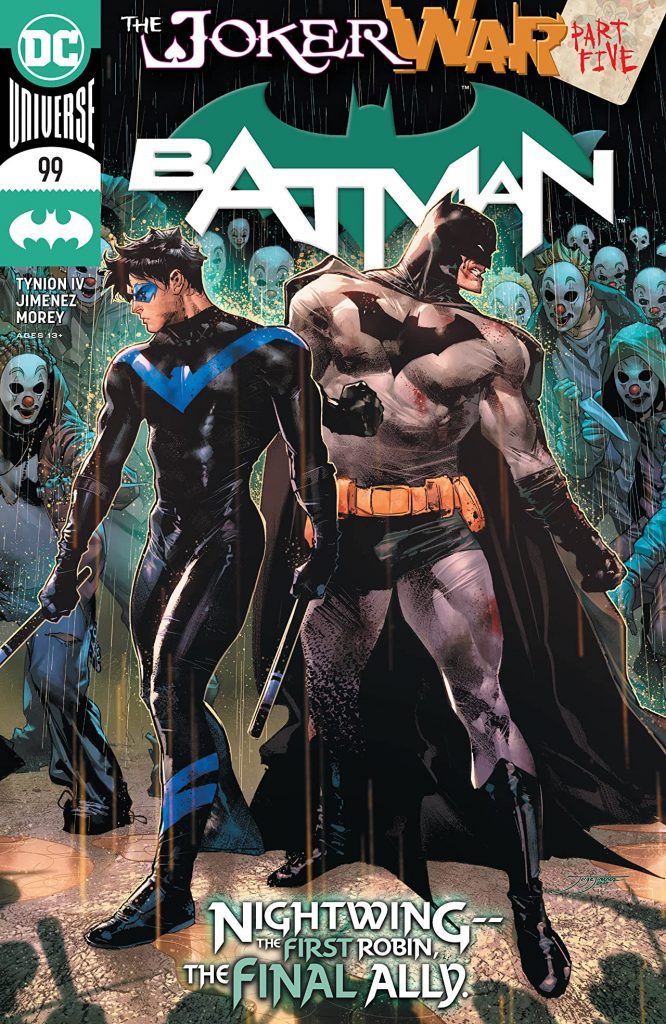 The penultimate issue of “The Joker War” is out this week in BATMAN #99, inching us ever so closer to DC’s big summer series. Gotham is running amok with goons, The Joker still has the Wayne fortune, Batman assembles the troops and ends up at a familiar site where we’re guaranteed a big showdown….in the next issue.

I guess that’s where my excitement level continues to remain in check. I feel like Tynion’s BATMAN run keeps teasing us the “next issue.” So I keep waiting for the next issue, and am told “yeah, the last issue we said next issue but we meant the NEXT issue.” I know this is a long story that has to play out over time, but it hasn’t delivered on that epic level…at least not yet.

What we’re shown in this issue though is promising. Tynion uses these 20+ pages to sow some seeds and get us ready for the big Joker showdown. Oh and inside that box is a pretty cool item that reminds me of a unique SUICIDE SQUAD statue (that’s a deep pull but some of you will get it).

Art by Jorge Jimenez continues to be the star of the show. I love how he draws everything. The characters are shady and a little messy. Gotham is a colorful mess. The action is clear and fun. I really dig this guy’s art and can’t wait to see what he does next.

I think “The Joker War” will read better in a trade. I’ve enjoyed it to varying degrees thus far, with highs and lows of course, and really hope it sticks the landing next issue.

I want us to look back and recognize this as a Joker war and not just another Joker squabble.

Bill will return as the reviewer of BATMAN in issue #100. – Ryan Lower