SYNOPSIS: Light the Bat-Signal, because Detective Comics #1027 is here! In honor of Batman’s first appearance in Detective Comics #27, this special, book-size celebration brings you the biggest names in comics as they chronicle the most epic Batman adventures Gotham City and the DC Universe have ever seen! The World’s Greatest Detective has a mountain of cases to crack: Who murdered Gotham’s most corrupt police officer? What does The Joker’s annual visit mean for Bruce Wayne? And most importantly, what WayneTech mystery will sow the seeds of the next epic Batman event? All this and more await you within the pages of the biggest Batman issue of them all! 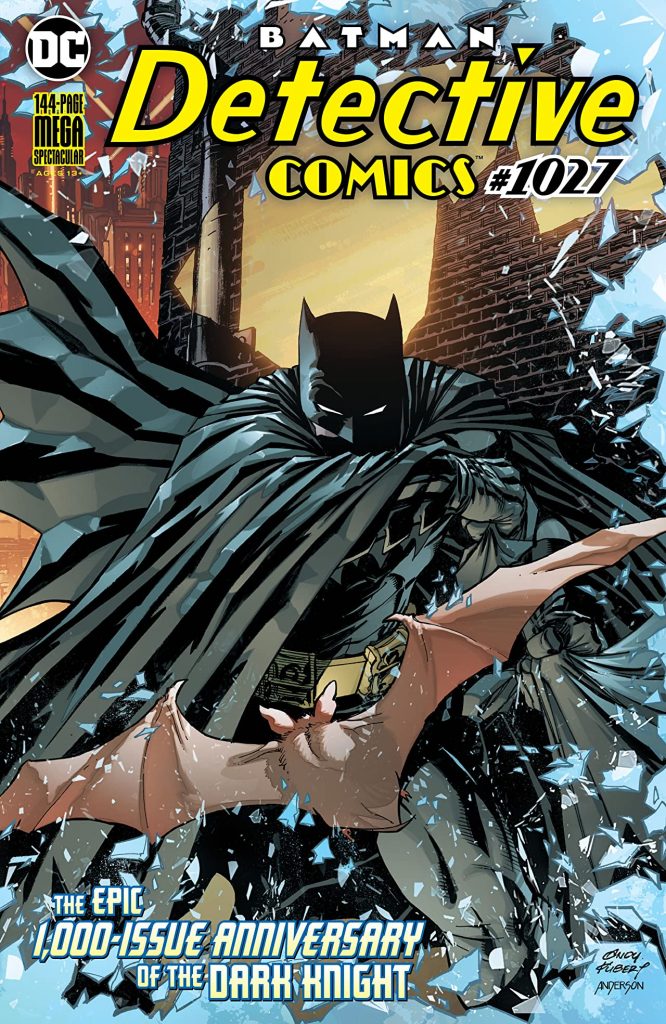 Is it just me, or does anyone else feel like we just did this?  A little over a year ago we celebrated the 1000th issue of Detective Comics.  Well, dig deep in your wallets, Detective Comics #1027 — the 1000th appearance of the Batman in Detective Comics — has hit shelves.  We are blessed with at least twelve different covers and eleven stories inside this 144-MEGA PAGE SPECTACULAR.

Like every DC celebratory issue, we have a buffet of writers and artists contributing to an issue of this size.  A line up of writers that consists of current ‘Tec writer Peter Tomasi, mainstays like Greg Rucka, Marv Wolfman, Dan Jurgens, Grant Morrison, Scott Snyder. The new guys are Brian Michael Bendis, Tom King, James Tynion, and more!  Combined this crew has probably written 50 years of Batman between them.  Writers that have each had deep runs exploring the depths of The Dark Knight.

There are stories for all types of Batman fans, a variety of great stories to pick from.  I’m going to talk about my highlights because, let’s be honest, I could write a thesis on this issue.

“Blowback” by Tomasi brings a summary story spanning the history of Batman and his battles with his gallery of psychos. While trying to escape near death as only the Batman can.  Just the type of vintage story that Tomasi writes so well, classic villains galore.

What I really love about this issue and there is a lot to enjoy here, but we finally get a taste of a real Bendis Batman story and he aces it!  I felt that Bendis’ run on the six-issue Batman: Universe left a bit more to be desired from a writer of his caliber. Well, let me tell you that “The Master Class” really brings that strong detective vibe that you would get from those old Bendis Daredevil books.  A wonderful story involving the entire Bat-Family as they try to solve a murder.  Each member showing off their skills in a surprise love story.

“Fore” by Kelly Sue Deconnick is a really tremendous Batman/Bruce Wayne story where we see both sides of the World’s Greatest Detective.  It’s always fun watching Bruce Wayne take down the bad guy after it is the Batman getting his hands dirty.  Seeing villains thinking they can intimidate Bruce Wayne right before they go down, it gets better with every panel and page turn.

Now the story that I liked the most about this issue comes from the one writer who has confused me more than anyone I have ever read.  Yes, I am talking about Grant Morrison.  Morrison delivers the most interesting story in the book, “Detective #26.”  This story takes place in the early days of Batman’s career.  In fact, Batman is barely in the story; instead, we follow the beginnings of another vigilante crime fighter in Gotham.  It was a real treat seeing yet another one of Gotham’s children try to dedicate his life to protecting the innocents of the city, in a time before the Batman was a household name. I couldn’t be more surprised honestly; this was such a splendid read and really stands out from the other stories in this mega issue.

I don’t want to leave out all the amazing artists in this book.  ‘Tec regular artist Brad Walker goes crazy with wonderful “pin-ups” of all your favorite villains.  Joker, Penguin, Catwoman, and Riddler are just drop-dead stunning in “Blowback”. David Marquez artwork in “The Master Class” might be the cleanest artwork I’ve ever seen.  While providing the second-best poster-worthy panel of Batman in the issue.  With a low angle shot of Batman standing tall in the foreground with the moon and the Batwing behind him in the distance.   Riley Rossmo brings his quirky fun style to the Batman/Deadman mashup in “Ghost Story”.  But the panel of the book goes to Chip Zdarsky in “Many Happy Returns.”  It’s a wonderful tribute panel to ’89.  The Joker is atop a float dressed like Prince from Batdance while Batman is surrounded in a solid black suit with a pill belt.  Just a beauty of a panel and the most poster-worthy piece of art in the issue.  I can hear “Trust” in my head right now!

I could go on and on about how great this issue is.  I’m going to give it the slight edge over Detective Comics #1000, with issue #1027 getting the edge by percentage points.  I found this a solid tribute issue to the greatest character in comic books.  While I still think that Action Comics #1000 still is the best one of these thousand issues, this is an issue with a story for all Batfans, and when it comes down to it what else could you ask for?  New and legendary writers, heavy hitter artists all together for one issue.  While $10 can be a lot for a comic book there is so much quality in this book it is beyond worth it.

Now that I told you my favorite parts of this huge issue.  What are yours?  Sound off in the comment section below.  I would love to hear your opinion. – Peter Verra